Maps, mods and resources ported from or to Unreal.
Must run in UT99 or with Oldskool Amp'd.
Unreal 227 only projects are "Off-Topic"
Post Reply
28 posts

Synopsis: It is approximately 22 years after the Skaarj Empire's humiliating defeat at the hands of humanity in the 7 Day Siege. The Empire has been struggling to maintain their grip on Na Pali ever since, as human and alien mercenaries alike gleefully tear away at the rest of the Empire's resources.

After the deaths of all personel situated near a string of Nali temples dedicated to the god Ehactora, the Skaarj high command had enough. The Queen's Blade, a large cruiser filled with experimental weaponry and elite soldiers, was dispatched to Na Pali in order for the Skaarj to reclaim that section of space. However, a mercenary attack forced the ship into Vandora's Eye, a massive, ancient, and seemingly impenetreble storm that the Nali have long attributed to their god of lightning.

Command assumed the worst. Attempts to reestablish contact failed; signals were able to penetrate the storm, but nothing could get out - until today. The ship's crew was, for a few minutes, able to signal command for help.
To say the least, their screams suggest that the locals are not particularly friendly. As part of an elite team, you have been tasked with finding the ship and recovering the crew.

Features:
-6 playable maps in part 1, 6 in part 2
-12 to 13 total maps in the full campaign (including an intro and outro)
-Old/recovered Unreal content repurposed for new weapons, enemies, and environments
-Emitter effects from the 227 patch courtesy of dots

Skaarj Hunters: Some of the first Skaarj to ever step foot on Na Pali, the Skaarj hunters are one of the few clans to be completely cut off from the rest of Skaarj society. Without a queen, they have resorted to cloning technology and a heavy reliance on other species in order to survive.

Kraal: Renamed by the Skaarj Hunters as a symbol of their close working relationship, the Kraal are devilishly intelligent and hold positions of power that their lesser relatives can only dream of. The Kraal are a diverse bunch, so don't expect to fight them like ordinary Krall and come out unscathed.

Bigmen: These brutes make up for their lack of armor with equally tough skin. They are stronger and more accurate than other brutes, but they're just as stupid.

Slithling: Unlike Skaarj pupae, young Slith such as these are deadly predators from the moment they spawn. They are just as fast in the water as fully grown Slith, and their powerful spines allow them to throw enemies across great distances (an ability Slith lose once their arms are completely developed).

Lesser Dragons: One of several distinct dragon breeds taken from the Skaarj homeworld, lesser dragons are named for their size (but not their bite). Bred as flying watchdogs, they obey the Skaarj Hunters and Kraal without hesitation.

Nali Hawk: These raptors are native to some of the high-elevation regions of Na Pali. Many have been domesticated and were once used by the Nali as messengers. When they aren't hoarding items in their nests, they can be found in mines and outposts as sentries. Due to their tarydium-weakened digestive systems, it is not uncommon to see a small group of them passing around flesh from a recent kill to ease the process.

Devil ray: These swimming creatures bear a striking resemblence to the stingrays of earth. They are normally docile, but are easily threatened. Their stingers are deadly, so it's best if you keep your distance.

Izarians: One of many races to be subjugated by the Skaarj, these cackling savages are well suited to chasing the Skaarj Hunters' enemies or the occasional Nali slave. They are equipped with specially-made impalers (among other weapons) and generally work in groups. The Izarians were originally sent to Na Pali as part of the task force to reclaim the planet, but they quickly aligned with the superior Skaarj Hunters.

Flayer: These arachnid-like creatures are highly territorial, mobile, and work in groups. They may or may not be distant relatives of the Spinners, and serve as evidence against the existence of the kind and loving gods that the Nali worship so dearly.

Tarydium Amplifier: The Skaarj Hunters have access to a form of Tarydium that is quite rare on Na Pali. They have been tampering with it for years and have finally unlocked its unique properties. Like the regular amplifier, it charges energy weapons, but it has the added benefit of charging Tarydium-based guns like the Stinger and the Stunner.

Razik Powerup: The Razik isn't the best weapon out there, but you'll still be able to hold your own against tougher enemies if you find one of these powerups. They give benefits such as extra melee damage and projectile speed, and they incur no negative effects.

Oxygen Mask: Although it doesn't hold as much oxygen as the human SCUBA gear, the Skaarj oxygen mask absorbs breathable air from its surroundings when not in use.

Combat Shield: Commonly used by Skaarj infantry, this device provides protection against incoming projectiles. It is less effective in protecting against explosions, and cannot be used to guard against melee attacks. It is best used sparingly, as it drains power quickly.

http://s26.postimg.org/647ciehah/testny ... _4_151.png
Raziks (slot 1): The infamous raziks are the first weapons you'll have. Primary fire shoots two Skaarj energy projectiles. As a skilled combatant, there are a variety of melee attacks that you can perform. Secondary fire swipes the blades. The third firing mode performs a lunging swipe of the blades. The fourth firing mode performs a spin attack. The raziks' ammo recharges over time, so you'll never be defenseless. Like the dispersion pistol, the raziks can be upgraded with powerups.

http://i.imgur.com/SjpbcOB.jpg
Stunner (slot 2): This tarydium-based gun is employed in high-priority mines where slave escapes and riots have become problematic. Primary fire charges up a weak beam that pushes enemies backwards; secondary fire does the same, but the beam pulls enemies towards the user. It does low damage, requires accuracy, and isn't suitable for heavier foes, but the stunner is good for pushing enemies into hazards or getting them within reach of your razik.

http://i.imgur.com/NTDUk0v.jpg
Impaler (slot 4): An old Skaarj weapon whose origins have long since been forgotton, the impaler is almost exclusively used by the Izarians. To the uneducated, this seemingly basic weapon blurs the line between magic and technology. It uses an unstable violet crystal as ammunition; primary fire continuously shoots a beam of energy from the crystal, and secondary fire launches the crystal to create a large explosion.

http://s26.postimg.org/4mlxudp1l/testny ... 3_4_71.png
Hunter Razorjack (slot 7): Living up to their name, the Skaarj Hunters often enjoy setting traps for unwary creatures like the Nali. To accomplish this with ease, they gave the Razorjack a third firing mode that shoots blades which stick to surfaces and act as caltrops, injuring anything foolish enough to step on them. The blades from the weapon's primary and secondary firing modes will also stick to surfaces after bouncing a few times.

http://s26.postimg.org/dy7y3sp3d/testny ... 47_687.png
Sunspire Missile Launcher (slot 8): The weapon of choice for discerning Warlords, the latest iteration of the Swarmer launcher has been improved to be lighter, stronger, and more versatile. Primary fire shoots a high speed rocket that deals heavy damage. Secondary fire shoots a much slower rocket that can be guided and then detonated at the user's discretion. The weapon's third firing mode is similar to the second, but it allows the user to take direct control of the rocket via camera.

http://i.imgur.com/A6D2iMp.jpg
Minicannon (slot 0): This miracle of Skaarj ingenuity was born out of the need to combat the interstellar mercenaries and the occasional space marine. The minicannon's primary fire, like the minigun's, shoots a steady stream of bullets. Secondary fire is different, shooting a single bullet from each of the minicannon's four barrels for a powerful close-range attack.
Last edited by AlCapowned on Wed Oct 21, 2015 11:11 pm, edited 7 times in total.
Top

SUPER interested in this! I might just have to reinstall and fire up the coop server.
So long, and thanks for all the fish
Top

Yes, they all work. They just need patch 436 because a lot of them use skeletal animations.
Top

AlCapowned wrote:Yes, they all work. They just need patch 436 because a lot of them use skeletal animations.

Can't wait for the release.

Are you sure Skeletal anims are part of the patch, not Bonus Pack 4 ?
I seem to remember the Chrek models needing BP4 or "Advanced Model Support" http://www.pseudorandom.co.uk/2001/paradox/ams/

I'm pretty sure that patch 436 adds skeletal support, and bonus pack 4 makes use of it. I think AMS is mostly for a bunch of skin stuff, but it's been a while since I looked at it. I don't think the Chreks needed anything extra, but I haven't used them in a while either.
Top

Yes I believe you are correct.
Just looking at "AMS" again, and I see why I remember a connection with BP4, as it replaces some functions in it.
I think AMS scripting is used for the cool animated skin available for the Space Marine.
Chreks remind me of the potential for multi-limbed models, and I am surprised we never got more Nali variations

AlCapowned wrote:Yes, they all work. They just need patch 436 because a lot of them use skeletal animations.

Pretty good! Waiting for the release and test the pawns.

Here's the new version of the razik(s). There are a total of 12 melee animations, with some right-hand attacks, left-hand attacks, four blade attacks that do twice the damage, and more.

With this, I am very happy to announce that Doublez-Down and Tronovision have joined the project as mappers. They're going to do a great job!

You fixed the problem of weapon animations when playing online??
Btw looks great.

It's still there unfortunately. Even though I made it so the same animation never plays twice, it still happens when one animation plays, and then the mirrored version of that animation plays (ie. Claw5 is a mirror of Claw1, so if either of those play after each other, they freeeze). I'm at a loss.

Want me to take a look at it? I just need the weapon itself, not the whole package.
So long, and thanks for all the fish
Top

Is it just me or are the arms on that Skaarj you're playing as from ut2004?

The design of the Raziks and the pattern of "your" scales on the arms look like this guy: 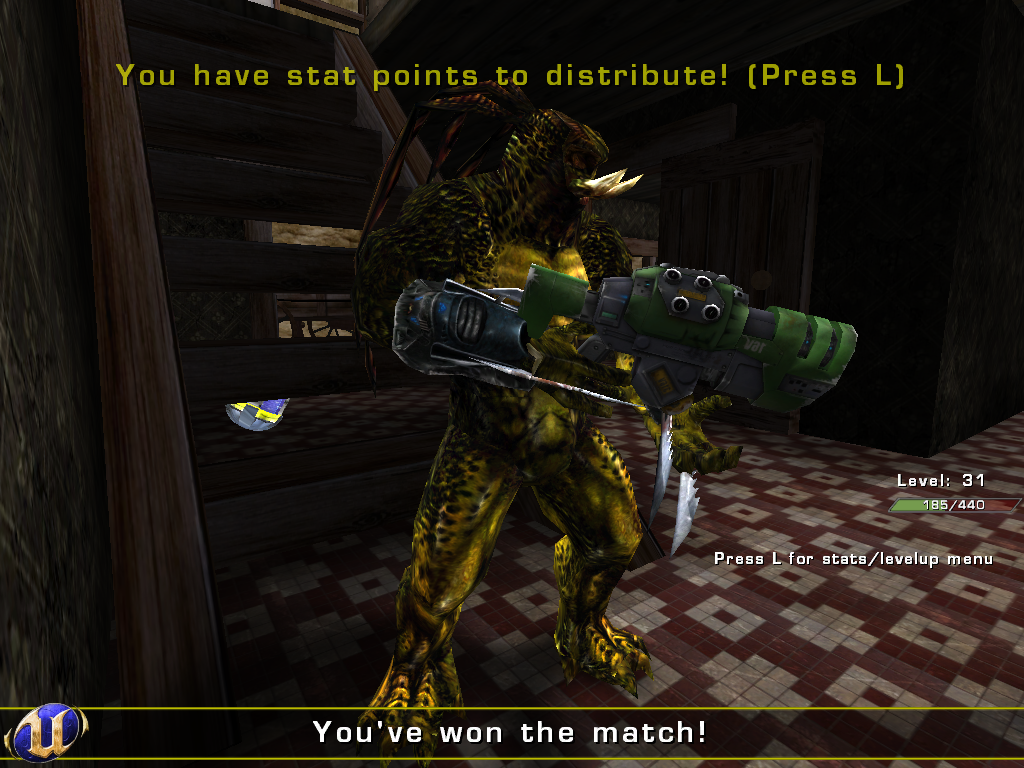