Get some cool tips about how to tweak your UT graphic, gameplay, and much more!
Post Reply
11 posts • Page 1 of 1 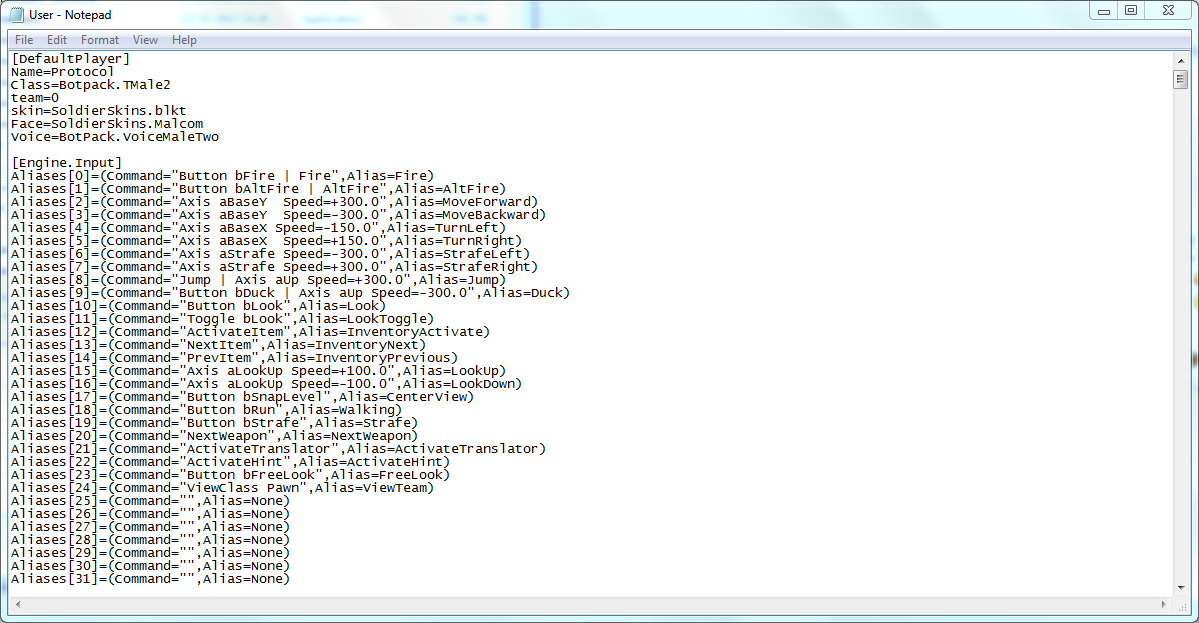 (WILL FIX, BUT LOOKS EXACTLY THE SAME AS ABOVE)

Then, scroll down to the part that looks like this. 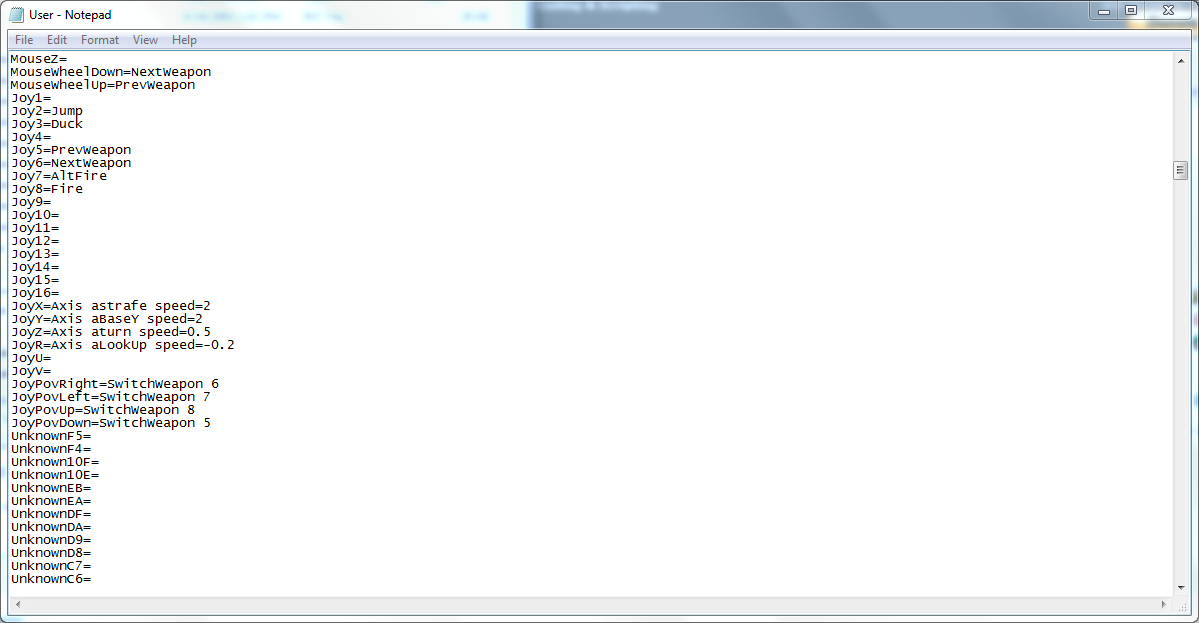 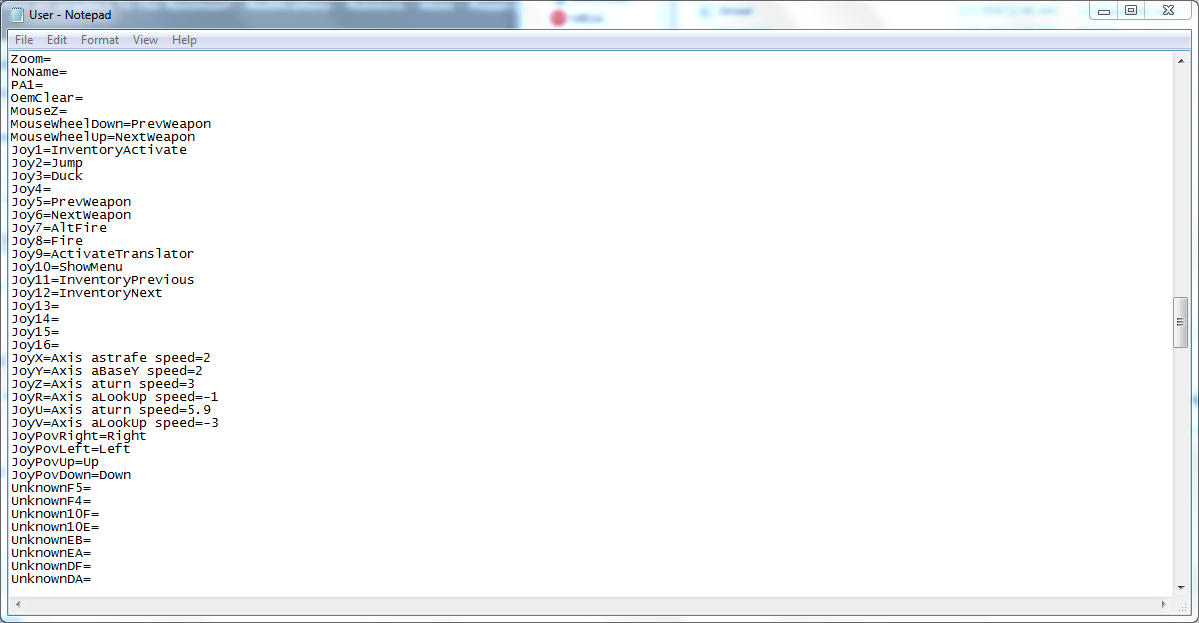 As you can see, I already set up my gamepad controls. However, I am not using an Xbox One/360 gamepad, but you can easily figure out how to use those
This second step can be split up into 2 parts:

1. You have about 16 different buttons you can use. Through Trial and Error, you can see which buttons do which functions.
2. Open up the Windows control panel, and look for controllers. I am using a Rumblepad 2 Wireless for this. 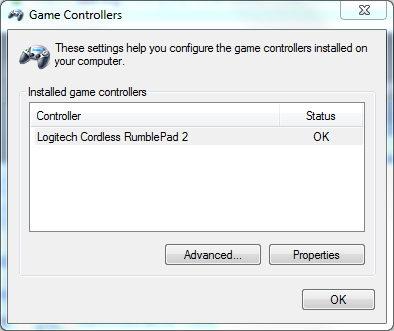 When you open it up, you'll see a list of buttons and numbers corresponding. However, I do not have this (Due to have updating my drivers for this controller in particular).
For everyone else, you should see a bunch of circles with numbers in them. Press each button, then type up what number each button corresponds to. For me, this is what I have:

Therefore, for each area that says Joy#, it corresponds to one of those buttons.

Now, for actually using the buttons in game.

As for commands, what I did was look around for certain commands like PrevWeapon and NextWeapon. But, just for reference:


Now, here is a problem for everyone using an Xbox or PS controller, which are the triggers. Now, here are 2 solutions:

There are several advantages to using these:

1. You can program mouse buttons and movements to buttons, triggers, ect...
2. It gets rid of alot of roadblocks such as navigating the menu.
3. It's a bit less buggy, and can save alot of time if used right.
4. It's alot less messy, and much easier to set up than in the actual game.

Which do I recommend? Well, I recommend Xpadder since it's both free, and very versatile.
If you want to continue forth to the dangerous depths of the Analogue Apocalypse.

2. Programming the buttons in game
This is a much simpler option, and also gives you a user interface to assign everything.


Except the analogue sticks. Oh boy.


Now, the analogue sticks.
Wanna know why this doesn't include Deus Ex? Yeah, because it doesn't like joystick support. It seems that Deus Ex removed most of the functionality of joysticks, resulting in the second analogue stick not being detected, and certain buttons not working at all. Besides, who ever thought that was a good idea? That's like playing System Shock 1 with a power glove!

Anywho....
Alot of trial and error is put into this. UT99 is very sensitive with analogue sticks (in my experience, at least), so I had to go with this:

By default, JoyR is inverted, which explains why I went with -0.2.

As for Unreal Gold, it seems it's less sensitive with analogue sticks, and as such, I went with this:

Yes, I know the vertical looking speed is very slow, but you can easily adjust it.
Unfortunately, a problem I've never been able to solve is the use of menus, and it makes it a bit frustrating and ironic to use a controller, if you're going to access the menus using a mouse and keyboard.
Now, the FAQ:

Q: How come you can't make a mod for the controller to work in menus?
A: Well, big surprise hot shot: I don't know alot about UnrealScript, other than adding textures and Conversations in Deus Ex.

Q: Why are you not using an Xbox Controller?
A: I currently don't have one that works with PC, and even though I have and Xbox One controller, it simply won't work with mine.

Q: How come you can't program the analogue sticks?
A: The analogue values cannot be edited in the controls menu, so it has to be done with the power of TEXT.

Q: Do you normally play UT99 or Unreal with a controller?
A: UT99, very rarely. Unreal Gold? Very often.

Q: Why in the world would you play an online multiplayer shooter, where accuracy is key, with a controller that is inferior and less accurate than a M+KB combo?
A: Well, call me an outcast, but I've only played online multiplayer on UT99 3 times, and all 3 of them were on modded servers with awful custom maps. I prefer playing against bots on high difficulties, along with the singleplayer campaign.

Q: Outcast.
A: That's not a question, but I'll accept that as a valid comment.

1. If this means a tutorial (doubting a bit) It SHOULD go in Tutorials Section.
2. If you think you are in charge to teach others, well you should learn some rules explained here.
3. Welcome aboard - rules are here #8 included as well, enjoy your stay.
Edit: Wrong move = Delete wrong post
Post unfinished = Writing at Bottom > Processing-Editing...
or something similar for showing that thread is currently still under editing - it's that simple.
Last edited by sektor2111 on Wed Mar 02, 2016 7:33 pm, edited 2 times in total.
Top

What I meant was that I went to hit preview, and I accidentally hit Submit when I wasn't finished. Anyways, should a mod move this? Because I don't want to repost this.
Top

Moved.... and added this to my "how to make your PC UT more console-like" list. Hope you don't mind

Thanks UnrealGecko. Well, I hope this tutorial helps someone! I'll post some gameplay with it.
Top

One thing I've had an issue with in the past with Xbox 360/Ps3-4 controllers is binding input to triggers. I can't bind them at all, I think that is because they may be considered another axis of some variety instead of buttons (based on what I've read anyway). I got around this by either using Xpadder and JoyToKey.

I've found it easier to bind all necessary keys to controller buttons/triggers and bind mouse movement to the right joystick. This way, if you have the mouse bound to your triggers, you can still navigate menus by using the right joystick and your mouse binds for menu navigation. And if you need to move back to mouse and keyboard, you can just drop the controller and not worry about rebinding controls in certain cases.

. . . Also JoyToKey has badass mouse acceleration options and can save multiple profiles. And Xpadder can use key macros for dodging setup or key locking (so you can lock look centering when lining up a ASMD Super Explosion).

Edit:
@papercoffee
Advice: don't use the Enforcer, Impact Hammer, or Minigun. And the "center view" command is your friend. Flak and Rockets for days.
<<| http://uncodex.ut-files.com/ |>>

I had no idea that Xbox and PS triggers wouldn't detect. I think they're analog, which might explain the problem. As for the deal with Xpadder and Joy2Key, I think this is your best bet if you want to play the entire game using only a controller. Otherwise, stick with the in-engine stuff. I'll update the first post with more info.
Top

Great first post Robert and welcome to the forums. Dang...you have done more in one post than I have in 250!