For the moment LZMA stuff is history. Compressor no longer works, not even in a Windows7.

[attachment=2]Good_Bye_Lzma.PNG[/attachment]
Edit: More entertaining bytes
All what I wanted was to do small fixes to a map and preparing it for server with redirect and all that...
I went to check what was reporting the toy provided by Chris if I'm not mistaking for figuring missing devs required by various UT stuff:

So I was curious to see what's going on in some attempt to launch such a map:

[attachment=1]Attemp_No_Deps_Level.PNG[/attachment]
It was the night of my mind - I was unable to figure the reason - but I know well reason due to another deal else it is crashing with no comprehensive explanation, not rejecting map and nicely returning to menu.

[attachment=0]Invalid_Ending.PNG[/attachment]
Perhaps I have to fallback servers to v21...
I'm not curious to find what will happen if I will set an automated LZMA compression - I did not used that before because was compressing stock for no reason.
That XC specific crash-log was like here:

For a noob user this sounds like someone was pressing escape on a painted UCanvas and Wrapped string went to an exec for an event rendered by a TMale in some intro-Map bugging almighty drawer engine and ViewPort went screwed due to a Staticproc from a WWindow...

.
Serious now: For me this is saying nothing about what is missing.
You do not have the required permissions to view the files attached to this post.
Top

The compiler change exposed a lot of blatant c++ non-standard stuff in the UE1 codebase.
Yes, I noticed some commandlets have been rendered totally unusable as well.

I'm going to fully rewrite the launch system into a more UE3 style mode, that way launchers and UCC won't need to be constantly updated.
The plan is to move engine loop to CacusLaunch.dll in a similar way UE3 games moved it to Launch.dll

In the meantime I'll be adding some missing features.
- Ed: Align texture based on camera angle/distance.
- Ed: Completely rewrite the path rebuilder using non-UT code.
- Raw Input remap of mouse 4 (and above) buttons... I DON'T HAVE SUCH A MOUSE!!!
- Fix a weird bug in relevancy loop.

Aside, do you know what was more scary ? I was trying to setup a small CTFGame for probing something. My CTFGame was working but... BotPack.CTFGame - None - error. SoccerGame (daughter plays it randomly when her tablet is out of "fuel") None. Some Chaos - None. So far I'm using compressor from a previous Server-Path which I have installed else I cannot really do too much. I did not figure these problems because I was playing my custom games and... interesting, but they work for some reason... while others are crashing...
Top

A split ?
I'm thinking now at those VisNoReachPaths[x] and their purpose... Right now I would go in two directions:
1) By removing them COMPLETELY map is smaller with less data and... game is not crashing

. I really don't get why are these bytes added, future plans NEVER finished so far. They are only referencing some actors and have nothing in common with them. ReachSpecs are fine, thanks, because actors are not deleted.
2) Adding aerial and jumpy things for those lower/closer placed ones giving them a purpose because right now I really think that are pointless.

Probably I'll write some option in a builder for flushing these junks out at will. Does engine do a path seeking orientation based on them for super-duper pawns ? Let me guess: maybe not. I'm not sure if worth time for writing a custom verboser Node, talking what a certain Pawn does while is searching for a target goal for figuring if these will ever have any run-time usage except when my linker mutator will add some fly reachFlags making them useful here and there...

In other common cases "for my X game-type server which stays empty with no Players and no Bots" - trendy now days - these bytes are entirely useless.
Top

Someone I told about XC_Engine is having this error: 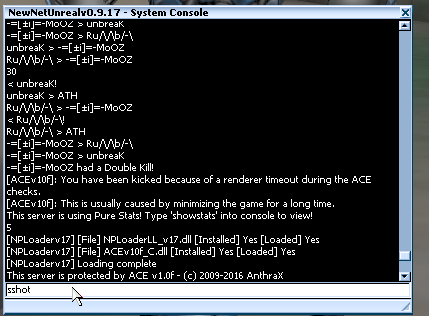