JackGriffin wrote:I know several guys that love to poke around in the bot AI because it interests them greatly and I'm glad you are enjoying this. I'd just be extra careful not to make anything that can be abused and also keep in mind that "How do I remove Loque from the botlist" is a very common server setup question for a reason.

Yes, indeed Jack that's the same exact thought that I was concerned about. I am acquiring a positive feeling after reviewing the previous posts. Maybe this will turn out to be something much more better than we are expecting? Higor is an expert and his main focus is to make the most human like AI. I am trusting Higor in his work and we can't make decisions from the current information. The best thing to do is to wait for the newest beta release, and then we will be able to look into botz combat.
Top

Got a bit lazy past week, but at least reduced the excessive dodging and added an incomplete Shock Rifle profile with combo fire support.
It has some minor log spamming but quite informative, lower skilled botZ will try to 'start' their own combos by alt-firing, highers skilled ones will attempt to hit other shock balls near it's enemy. 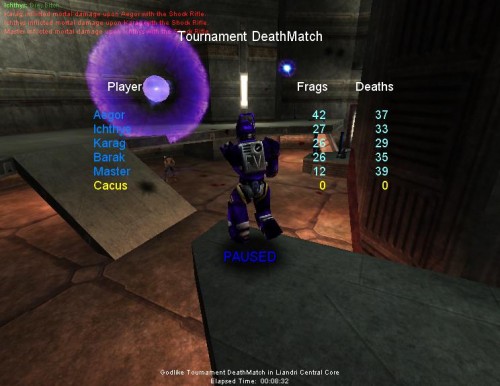 Really interesting......
The botz are set up on their default setting (Masterful), and with high skill they can beat 'Godlike' bots. I know that the difficulty settings are not yet worked on but will this mean that botz will provide a greater challenge than the UT Bots ever did?

Firstly, since you're working on that Shock Rifle profile I was wondering about that prefire mode that could really be a cool combination with the shock rifle.
It would have a similar concept just as the one you have made with the botz aiming system while camping. Except this time you could have the higher skilled botz
shoot the slow moving projectiles toward path nodes while hunting or charging. This will also have hearing support, since you oppose peripheral vision this could be a great idea. It would have also prevent the botz from random spaming creating a perfect prediction system for a botz. I myself find this idea logical but is it possible to put it into a script?

Lastly, the most annoying thing in UT is Loque. Well, yes he is basically a custom bot which has about 98.99% accuracy but that's not the worse thing. His high level of accuracy isn't as effective during combat as you might think. In most cases, a moderate skilled human player could compare with him. There are a few exceptions though.... The minigun with high level accuracy bots is the worse thing. I've seen a lot of bots do that in my early gaming career. Bot + Minigun = destruction
Bots can control the secondary fire from long distances, maintaining a perfect accuracy level. In many cases, the bots accuracy with the minigun could kill a player from short to medium distance faster than a real player would do using the same firing type in front of an AFK. Some weapons maintain a perfect level and are acceptable. I also found something really similar to this in UT 2004. If you have never played it then just imagine a similar concept, but with the Rocket Launcher.
So the purpose behind this is that I am trying to propose an idea of limiting the accuracy level with some weapons. By my thought, I find 60% to 80% to be fair with the minigun.
Top

BotZ doesn't modify weapon behaviour, neither do weapons modify BotZ's behaviour, the only exception being the impact hammer's hardcoded fire state which provides autoaim + distance advantage to non-player controlled pawns.
I agree with the minigun thing, I used to have a Bot in my old roster (8 years ago) with all values set to minimum but the accuracy to maximum, minigun as favorite weapon, impossible to defeat.

The prefire is a charged fire state, or spam state, using it on the shock rifle would mean frequent alt-firing.
Sure, I could simply make another conditional that dictates it can only be done if has enough ammo and upon hearing, which would be ideal.

Speaking about hearing, that is one of the very few aspects I haven't touched from the main code, the BotZ simply calls SetEnemy upon hearing, I should definetly work on this and linking weapon behaviour to hearing events is one way to make bots spam better and look into suspicious locations.

As final commentary, Aegor is my main testing BotZ so it is expected for this specific BotZ to succeed on every DM test, still can't keep up against the likes of Tamerlane and Loque with hitscan weapons so it doesn't exactly mean a BotZ can defeat a godlike Bot.
As a matter of fact, it isn't intended to make a BotZ being able to aim better, play UT3 on Torlan or any huge map and you'll realize what Epic thinks a good bot is (stupidly high accuracy at 1000m with a pulse gun against moving targets), my goal is to make a BotZ outperform a Bot without depending on good aim, which is the kind of enemy any good player needs/wants in his spare time.
So what makes a BotZ currently outperform a Bot?
- Projectile based aiming doesn't use perfect formula, instead it checks whether the enemy can run to the calculated position or not (so BotZ never aims into a wall when calculating, prevents misfires and suicides).
- Path shortening giving huge advantage on Assault, CTF and powerup hogging, a BotZ will always have more items on his inventory and is more likely to complete his objectives faster.
- Increased perception (bugged hearing, looking around while running), meaning BotZ will attack first.
- Veteran level translocator usage.
- And lately, being able to spam/charge before seeing an enemy (Impact hammer and BioRifle).

Higor wrote:my goal is to make a BotZ outperform a Bot without depending on good aim, which is the kind of enemy any good player needs/wants in his spare time.

So far, you're doing a fantastic job.

I've seen botz do things that really impressed me. Continues translocation, impact launching, dodging while charging..........and way more.
Those are just some of the amazing features, and there are more to come.

BTW, what is the overall percent of the weapon profiles completed?
Top

Little work has been made with the profiles, so far added:
- One test profile (shock rifle)
- One conditional: TODIST (enemy approaching a certain point from player, used in shock combos, to be used in flak alt as well)
- One combat mode: COMBO (general version, shock rifle profile uses an extended one).

Also, modified the way the mutator stores projectiles to increase functionality:
The SpawnNotify the BotZ adds into the game registers all created projectiles into an array for faster access, the modification consists on moving the projectile number 0 into a free slot, then adding the new projectile to this 0 slot.
Why? Simple, the ability to check whether a new projectile was created or now during a function by simply comparing the current slot 0 with an older version of slot 0, example in the Shock rifle profile (not the actual code):

I think my next step will be the projectile rain conditional and mode, will add it to the biorifle and flak cannon test profiles.
It consists on firing projectiles to an unseen enemy above an obstacle.

Can this be used with Last man standing? If so what is the difference in adding botz?
Top

So far, botz are compatible with the original gametypes made by Epic Games. Higor has been working on the botz AI for Monster Hunt. I am pretty sure that gametypes that use custom actors will require coding within the botz script in order to function properly. So far, that's the only reason that causes problems with botz. We can take for exaple the Jailbreak gametype, developed by the UT community. It has a couple of compability issues that need to be fixed.
Never tested botz with LMS though. You could find out by downloading the newest beta of botz (ver. 6) and testing it out yourself. Higor included instructions on how to do so.


moonliten wrote:If so what is the difference in adding botz?

Mhhh...
My guess is that you're new to the game itself? Based on the question of course, you made me reason that.
I provided brief and short explanations below:
The original bots can be configured by the settings provided when starting a match. For now, Higor didn't create a custom UWindow (setings bar) for botz. You can add botz to the game by typing a command to either spawn a random botz or a custom one if you prefer. Before that, you have to activate botz in the mutator tab.
There is no point in me elaborating this any further. Just read the provided instructions titled "READ ME." Since, Higor is the maker of the mod he could help you more on this topic than me.

BTW, welcome to the community.

I downloaded both v6 and the latest v7. The botz work very well, when doing DM, CTF, but when doing LMS, when you spawn a bot it doesn't have any lives. That is why I asked the question difference.

Thanks for the welcome.
Top

Well, we have wait until that bug is fixed. There prodably will be support for it later, but that all depends on Higor.
Higor might have not yet tested botz with LMS so that could be the reason why this bug still exists.
Top

This topic has been quiet for some time now. So, let me awake the curiosity.

Are those weapon profiles close to finishing? If not, how much left in percentile?
Top

Exams month, gonna be back in mid july.

Good luck bro, knock 'em dead.
So long, and thanks for all the fish
Top

I suspect Higor is going to ace all his exams.

Sometime this week, I am going to try these FerBotz out with my UTSPFix gametypes.

And just to clarify something I posted earlier in this thread that was misunderstood....

I was certainly NOT criticizing Higor for releasing multiple beta's.
As pointed out, I am the last person that should be doing that. (I am trying to cut back a bit...)

My point there was that I was deep in the middle of working on 5 gametypes, that I am hoping should
work fine with this. But I didn't want to get sidetracked testing out a beta of something on my alpha
versions of these gametypes.

All of Higors posts have been very informative, and I have learned a number of things just by reading them.

I wish I had the communications skills to describe some of the things I have been trying to do as well as he does.
blarg
Top

Good luck on the Exams