I'm happy that you are pushing forward with XCGE. It's the pretty much the only thing here at UT99 org besides helping Anth with ACE that keeps me visiting this site.

SC]-[WARTZ_{HoF} wrote:I'm happy that you are pushing forward with XCGE. It's the pretty much the only thing here at UT99 org besides helping Anth with ACE that keeps me visiting this site.

The same for me.
Top

@ Schwartz and sektor nice to hear that. And also sad.
-=: http://jokercologne.deviantart.com/ :=-

Understandable, there hasn't been much going on lately, there was even a day without a single post made, and I don't remember the last time that happened.
Hopefully that may change a bit in the future.
(at least I am personally working towards such, although there's no progress to show for the time being)

Feralidragon wrote:there was even a day without a single post made

... which is not a loss. The loss is when people are covering good posts with X crap-posting just to rise up in forum's portal with useless junks, I'm not bother to show up dates and posts.
In XCGE's thread is a lot of information good to know and to experiment, also feed-back was required for ages. In exchange I could see sudden "problems" and "bugs" found - known for years - and SOLVED in big parts. Actually this topic and ONLY this topic is in my bookmarks space and it will stay like this next period - unknown period at this moment.

Aside note: I can operate some stuff in client with a very minimal bandwidth usage in XCGE's company, and using even actors which needs a correct initialization which might be a problem if actor is spawned later, but... it do needs a special consideration here...
Top

Bump - Testing Summary. Chapter playing using a wifi through a mobile data connection device 2G 3G 4G, so to speak everything Wireless.
At 2G speed connection is not that nice, of course bandwidth is max 256 kbps and around 128 kbps upload (aprox. 20/10 KB/s for real data transfer), which probably in company of some lag is developing a ping bug increasing up to 8000+ ms and dropping connection at a final point especially if mod is triggering a forced 20000 connection, NewNet using 25000 and even it is addressing such connections with lags is not going to be nice failing to achieve the goal for 2G players. In XC_MH game is controlling speed from time to time; by setting up net speed 2000-3000 and letting game to put it back at 20000 speed, ping issue randomly shown do seems to have a mitigation - it's almost solved. Probably server is trying to bomb player with data which player cannot get in a 2G connection at a moment and switching speed is helping a bit in this case as long as server will slow down the flow temporary at speed change until it will come back to normal.

In my case, 3G do seems to have a good game 80-100 ms ping using 2 ISP (server different from client) - Here I did some changes at XC_IpDrv and I have to check again long downloads;

For 4G case I really don't know if something can be better toward gaming, 70-80 ms for MH is just perfect, it works nice but I have to do more tests around data downloaded - how much is supported, issues, errors, etc.

I gotta admit these latest tests have been done using another terminal - a newer phone, not an expensive device, but good enough for common needs - related to other custom needs I don't need to speak about them here because are off-topic maybe another thread for that in Off-Topic will be somehow better.
Top

SC]-[WARTZ_{HoF} wrote:I'm happy that you are pushing forward with XCGE. It's the pretty much the only thing here at UT99 org besides helping Anth with ACE that keeps me visiting this site.

The same for me.

A net game running at around 80 ms ping sometimes is developing junk actors which doesn't seems deleted. Why client keep these and how do I remove them without disconnecting from this priceless game ?

And then, if connection has random lags and ping is around 200 ms, things are not really nice.

[attachment=0]More_ms_ping.PNG[/attachment]
Recommend me a solution for triggering an actor-update because it looks like here replication is really weak. 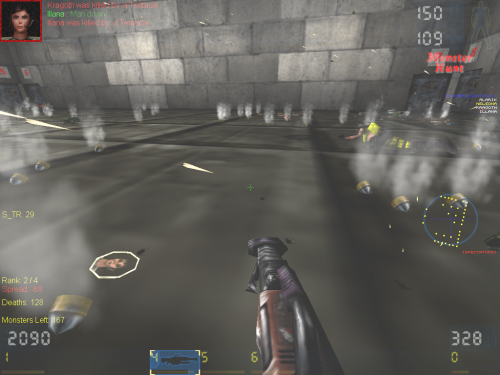 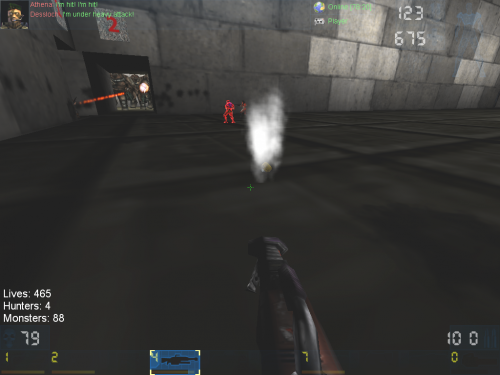 I saw this too in map MH-DeathcourseV2. The gasbags shoot kind of redeemers but before they explode they stood still right before. I did not pay attention to my ping but it should not have been bad.
Top

Clogged channels and massive packet loss cause that, actor channels don't have a 'heartbeat' functionality, and therefore don't have a 'timeout'.
So clients that fail to receive actor destruction will keep that actor lingering there forever until that specific channel (1 out of 1023) is replaced by something else.

One way to fix this would be to use up one of the channels for XC_Engine-specific comms, with this channel doing periodic cleanups.

Bump the ball.
So far I'm happy to see that now is possible to have Navigation in maps where is missing especially. For this is the main goal to attack. I'm gonna explain why bellow.
If you have a map with a lot of paths but stupidly loaded causing "loops" and "locks" I might be willing to completely remove old Navigation and entirely rewriting Path-Net - No need map names in public (private maybe). What would be helpful for me it would be to hint me with a code snippet where I can remove all nodes and their references on purpose to gain another new Navigation Network, I mean discarding even from array Nodes which are useless to speed up seeking process. Is this possible to update that array without to mock DevPath ? I have quit working for some "maps" because I have to mitigate evil sh!t done there and I'd rather prefer to reconstruct entire network in run-time. Is it enough to only get them out of reachspecs ? This will not keep array still loaded ?
If you say that I need to update some constants visible in UScript I'm ready to do that. If are needed some natives,... then you are the guy for that task...
Top

Okay I've found a map where I did the reversal of fore-mentioned operation.
The map which I found (2011) had PathNode actors, PlayerStart types and... NOTHING like a Network.
I went to use them even if they had only empty data - NavigationPointList was NONE.
First I build NavigationPointList right from UScript and I got operational iterator NavigationActors using a compilation dodge.

Doing a call through this List I've connected them and I got VALID routes which I tested using sequential checks.
What I need now is to launch custom InventorySpot types over weaponry and... missing nodes + desired checks around doors... unless I can move away doors for 1-2 seconds to gain Scout access at testing reachable points and then putting them back, or dropping them away because are not critical but maybe annoying for my task.
And now I want to test a reversal Action - probably I can remove ReachSpecs data from a bad Network, unloading NavigationpointList, moving points in zone 0, spawning new ones, building list based on new points (without those from zone 0) and... CONNECTING them. Purpose might be to not delete all old points - leaving them alone if somehow are referenced somewhere. If I can do this reversal then I might be able to do a triple-pass map tweaking and I will Unlock from Navigation Network SpawnPoints by reconstructing a cleaned NavigationPointList skipping borks outta new Network. Damn, I like this stuff

Once again, I'm grateful for what you did - for me your work is extremely helpful...

Edit:
I think I can repair the Broken Network from some of those screwed up maps - not sure if worth... usually such things are done by noobs and not only navigation is crapped up over there, but worth learning to debug stuff...
Top

Any thoughts on these crashes?

Two collision hash crashes, the only workaround is using the XCGE grid from CollisionGrid.dll/.so
And one travel manager crash I've never seen before, that's some of the oldest code in XCGE, should take a look at it again.

PD: Haven't been active because of work lately, making C++ automated webserver+api controller isn't simple stuff, the only good thing is that I used some of XC_Core's structures within this program, and i've vastly improved them over time.
Maybe I'll be seeing those implemented into XCGE some day.

Higor wrote:Two collision hash crashes, the only workaround is using the XCGE grid from CollisionGrid.dll/.so
And one travel manager crash I've never seen before, that's some of the oldest code in XCGE, should take a look at it again.

PD: Haven't been active because of work lately, making C++ automated webserver+api controller isn't simple stuff, the only good thing is that I used some of XC_Core's structures within this program, and i've vastly improved them over time.
Maybe I'll be seeing those implemented into XCGE some day.


thanks for looking. I totally understand being busy with other projects.

edit: out collision dll was missing for reason
https://www.vulpinemission.com