To be honest that's a fancy brain fart with counting packages. The most productive/useful would be to send the right file from server (at high speed from XCGE because that's why we have it) when player failed with a wrong file from a redirect messed up (some admins are dumb). In current stage client is being served with a Mismatch (default UT doesn't do this) and server becomes never playable for player without files - you can reconsider BPak as a sample. Redirect has 2009 file, Server has 2011 file. No One can play without having the right file. Actually player cannot get into server unless he/she is doing an OS hack by firewalling redirect else NONE game. Player downloading 2009 file from redirect when attempts to join is rejected. Without XCGE Player receives the right version directly from server - double download but he can join to game in end. I simply don't have any clue why do we need this change because what UT was good at this point.
Top

Bump.
It looks like indeed sudden boosting phenomenon happens randomly, rare but happens. I was with back at some wall (no Bot behind me - absolutely sure this time) and then I was firing rocketlauncher. Something boosted me in BPak style in that moment when rocket was fired. Not a single time I died boosted from nobody right in the middle of some fresh fired biogel types. Another time I was boosting very fast like that and then rocket has caught me blowing me up - yeah I was faster than the rocket fired. I don't have any clue why does this happen.
I gotta disable Level hook for the moment... for figuring how do works simple...
Top

Got way too much stuff to do and figuring out what's crashing the Linux build (GCC 5.3 lol) is taking a bit.
So I'll put the current source code for CollisionGrid here in the meantime: here https://github.com/CacoFFF/XC-UT99/tree ... lisionGrid

The discrepancies between GCC versions 2.95 and 5.3 are crazy, have to do all sorts of vodoo to make the game and this binary work together.

Notes about XCGE release (not about grid):
I see that spamming message 1000 Nodes is no longer crapping logs but... I don't see DevPath too strong - no big problem here I'm just happy to see things clean.
However, I don't know what is doable against looping spots. Those are really annoying. At this moment the only solution which I can apply is creating unidirectional paths with XC_PathBuilder else it loops in infinity - nasty if anyone else wants to make modifications in map and will mess up with default pathing.... I studied what were doing Bots in some Level in an easy zone (plain field). I fired MHBotyMan4 to check immediate directives (around Nodes) indeed it does looping. I moved nodes, I deleted one - USELESS. Is this problem related to distance/paths scanning matching 2 spots in the same way or wtf do happens in these spots ?
I must try bOneWayPath, but that's not an option everywhere - in CTF by example we do need paths for both teams not only a single team in one direction.
What I need is understanding/explanations in simple terms about this algorithm in order to put nodes as engine wants. Sometimes these spots are involving 3 Nodes, bot is cycling like a dumb-ass there.
Last resort is to mock again MBot's style (another bunch of time wasted) but... MBot's haters will get mad looking at default Bot being retarded in such a map while MBot is trying to skip some routecache and then, they might suffer some heart-attack or a premature Alzheimer - I don't want to hurt them.
Please give me a hint about what's happening there - is similar to that bad spot from LandsOfNapali but even with nodes more far each-other not really closer.
Such loop happened in my Sk-Godz in Teleporters room. I simply added more nodes similar to what Editor was attempting to do (I did not let it to entirely mock level) but I got some inspiration from what was doing - adding a node in front of each Teleporter creating some chains (which are not needed in usual cases).
Top

Bump no 2
While I had my client loaded with XCGE, I was attempting to join in whatever MH server, no names needed for public stage, but as matter of fact (because probably of awesome "encryption" used for those packages - LA13 type) I had to remove XCGE because client was crashing constantly after download right before to enter the game. Something is bugged at those compression queries, and files used by that server doesn't help at all... MapVote included. Or redirect was replying something nasty toward LZMA... Collision seems last problem to be solved... that is not hurting client...
Top

don't exist without XCGE, they are coming when XCGE is used...
Any solution ?
Top

Not going to read 64 pages, what dose this actually do?
Top

DID you read page number 1 and still don't get the "WHITE" from this toy ?

Okay once again my summary - my goals completed:
- PlayerCanSeeMe specific to windows servers bug is solved;
- Unreliable Buffer exploit attack is fixed - said un-fixable by the bug finder guy...;
- Replacing function does a lot of help in destroying errors from mod - new things are now available - each dude/lady can tweak stuff as he/she wants without to follow an unique rule from one coder;
- you can even Enhance paths from a borked Level;
- better timers deal;
- For a Server you might not need redirect, XCGE is sending files itself not in doggy slow speed which a default UT server does;
- stability of an XCGE server is never seen in a default ONE.

Dark-ish:
Still needs:
- Workaround when redirects are borked by admins;
- Collisions still are a little strange - they have to be disabled at this moment;
- Some of "_fast" functions implemented are not that nice but are fixable...;
- Some UWindow lists specific tweaks makes some MapVoteX to not work at all;
- Some Files remapping makes some skins like unavailable - pretty ugly in some points.

These Flaws vs Fixed things are balancing things for PRO XCGE in serving games...
For player, if server has a redirect well configured, XCGE loads LZMA files smaller than UZ and with no issues at tiny files where UZ is crashing client like an ass, things are improved with no doubts.

PS: My last homework
A small mutator like a tweaker able to deal with creating paths in a map which initially has no paths, read well, this task is impossible without XCGE regarding to coder's skill because only Editor can do this, and BTW for mappers**, XCGE in Editor is adding some extra options for making paths in a map... here I'm probably the only "mapper" fascinated about what is doable...
Top

sektor2111 wrote: XCGE in Editor is adding some extra options for making paths in a map... here I'm probably the only "mapper" fascinated about what is doable...

Eh, I see now that people in big parts don't read forum, is their loss not my loss... it says XC_PathBuilder...

[attachment=0]To_Check.PNG[/attachment]
Maybe I will have to explain a bit or doesn't worth duplicated explanations.
- you can prevent links in certain unwanted long range for restricted areas by using a short range even 650 in building process;
- else you can boost a long range path (even 2000 UU) by setting up Event from source node to the Tag of target node or Objectname of target node - a sample is map done weeks ago SlimeyBurney which no one has figured what I was trying to show - every one spoke about Screenshots and a lot of similar maps - I'm wipping my ass with ScreenShots, not ScreenShot was the goal there and that map is UNIQUE in what it is... Also wild links are doable when Editor doesn't link some nodes which must be linked. Yeah, mappers, have you seen what XCGE does in a normal map running in a Vanilla UT install ? I think NO.
At this pathing point the only problem I have with run-time pathing - in game pathing. Strategy with that expanded Scout doesn't seems very efficient, or I have to figure what do I miss. Only forced links are good but... they head to nasty aerial links... tracing doesn't seems to help or that map is a real crap... or... I will abandon this task... 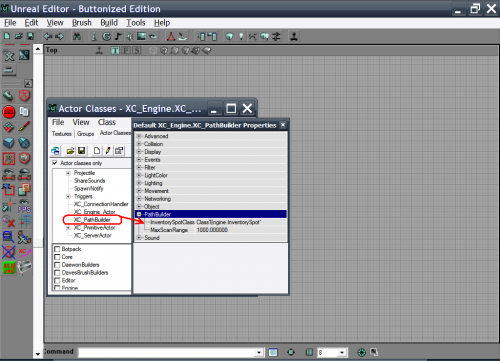 Yup ...I must be blind. Thanks for the information.

@Higor bump
XC_Engine_Actor cannot link 2 nodes in Editor ? It do works only in game ?

Maybe this is a known bug but when I use XC_Engine on my BunnyTrack server, we are seeing a bug with players passing through some movers without being crushed or killed.

Dizzy wrote:Maybe this is a known bug but when I use XC_Engine on my BunnyTrack server, we are seeing a bug with players passing through some movers without being crushed or killed.

Also, it only happens if the player doesn't move while the mover encroaches.
(The more info the more it'll be easier to find out why it happens in the code)
"Your stuff is known to be buggy and unfinished/not properly tested"
Top

I remember having a similar issue on BT-Rapture, where you couldn't "cheat" the second-to-last obstacle with XC_Engine (it wouldn't let you walk/flip ABOVE the recessed mover, where as the default game would let you get away with these shenanigans). But it was mitigated by adjusting the [XC_Engine.XC_GameEngine] settings... I'm just not certain which one. We went back to the stock engine at the time for other reasons, but I retained the ini file segment for future use. Probably bDisableBrushTracker, bCollisionHashHook or bDisableBrushTracker was involved (most likely the latter) but can't say for sure without testing again:

Why you need a saviour
Top
Post Reply
1067 posts