23/12/2019: Fixed a timeout bug and on-demand screenshot creation bug. These bugs only affect the server-side code, so you can safely install the updated package over the existing ACE v1.1f installation.

Hello everyone. A lot of people were still experiencing crashes with ACE v1.1d. I did some debugging on Pileyrei's machines and it turns out that ACE was crashing because it did not know how to parse really old UPackages (from Unreal 200 or the UT beta). This release should fix those crashes. In the meantime, I also added compatibility with the upcoming 469 patch.

**Please note that this release comes with a new version of NPLoader. You WILL have to update your server.ini file.**

Please refer to the SETTINGS.txt document included in the package.

Installation Issues: Some other testers have reported issues installing the server files. Most of these are caused by outdated system libraries. Please note that you will need glibc 2.15 or later on Linux. Linux distributions released before 2012 might have older versions of glibc.

If the PlayerManager fails to load, ACE v1.1f will attempt to dump additional debug information in the System/PlayerManager/ACEv11f_M.txt file.

A second problem seems to occur for certain admins running x86_64 Linux servers. These admins might see an error message such as this one:
Code:

This is most likely caused by a corrupted PlayerManager file. Please make sure that you upload the files in binary mode rather than text mode!

Kick logs that say "Not kicking because bStrictSystemLibraryChecks is set to false": This is not technically an issue. ACE v1.0+ has some very aggressive detection routines that detect a lot of legitimate external programs (e.g., Fraps, Display Drivers, Sound drivers, virus scanners...) because they do terrible things to your system DLLs. If you see this kick status, just ignore the log. The player will not be kicked.
You do not have the required permissions to view the files attached to this post.
Last edited by anth on Mon Dec 23, 2019 11:25 am, edited 1 time in total.
Top

I don't get this

Do I need to declare every single package ? Server uses CONFORMED packages...
And then

EDIT: After editing ACELIST I still get this

It's going to be entertaining:

Exactly as it was in original...

I'm not going to remove "UltraGore" but... definitely ACE. Waiting next version... If server uses a package, WHY CLIENT is being kicked for using it ? The same question as in prior version...
Top

Unfortunately, many players are suffering from timeouts with this version on my server. Had to revert back to v11d...
Website, Forum & UTStats

Also it doesn't automatically add NWUltraGoreSSEb to the list 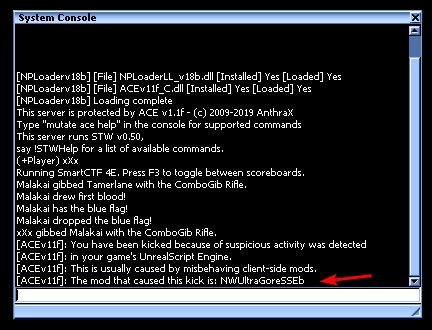 something to look into have manually added for now.

I fixed a potential timeout bug and updated the package. Can you please try this out?
Top

Do I need to declare every single package ? Server uses CONFORMED packages...

I just tested this on my server and ACE_AutoConfig automatically adds ChaosUT for me... Does AutoConfig fail to load for you?

ACE never checks all serverpackages by default. It only checks the ones you manually add, or the ones that perform potentially sensitive actions (e.g., rendering, tracing, ...)

I just tested XC_Core 10/XC_Engine 24 with and without XC_Launch and it works for me in both cases. I'm not sure why this would fail... did you keep your old ACEFileList.txt or something?

Ack. This isn't getting picked up by AutoConfig. I will see if I can fix this.
Top

Do note there are 2 versions of ChaosUT, the one that came with the GOTY edition, and the updated one from moddb.
My work for UT99: Counter-Strike VP, MaleOne+ & FemaleOne+ voicepacks, DM-XC-NaliTreeV2 (from the 2012 Xmas Contest mappack), DM/DOM-20AC-CastleGeorgeV3 (from the 20th Anniversary Contest mappack), (NEW!) DM-UFFO
my small spec of files at Google Drive

I conformed one (ChaosUT) which later I added into ACEList - the one more compatible with monsters due to said previous CMC contest, original having nothing to do with ScriptedPawn or Pawns generally.... But I could not solve UltraGore (gen 2 with config file solved) even if I added it in list and declared as package(x). Coroner worked after declaration. I think whatever package which resides in server's memory should not get a rejection in player just because it's running client side things - it's the same package, for God... More than that if said file doesn't include a crafted KNOWN cheat why client would be dropped ? To not forget how many plugins I load with NavAdder and all packages are aiming mountains of client tweaks delivered by server itself not by client using some extra-menu - these are automatically mapped as "ServerPackages" when NavAdder decides that map is matching something found in System (or other path addressing U files). Excuse me but this ACE and XC_Engine which at this time are running in my Win7 type server are not doing a great team together...

Funky stuff was with file XC_Engine.dll which had checksum right in ACE distribution, nothing was changed but client was kicked. Why ? I triple checked that thing and it's matching exactly both files: server and client. Why kicking then ?

PS: I might expect problems perhaps with Engine.u file as long as I do not use stock craps with Accessed Nones at decorations and the rest of poorly coded things. Everything it's working and running for hours without ACE...

Had some matches today and timeouts appear to be gone.

In the meantime, a player was kicked for a udemo version which I believe didn't happen in v11d:

On topic: I haven't been able to find documentation on how to modify the ACEFileList.txt file. Adding the new line

to generically allow the file from the above kick will result in all clients being kicked for ACEV11F_C.u - what am I missing? Do I need to adjust the signature part of the file, and if yes, to what?

Edit: Using NotePad++ instead of my FTP client's editor did the trick for me. I guess the signature can be a random string and is used as a verification from an online database, right?
Last edited by Sp0ngeb0b on Wed Dec 25, 2019 1:09 pm, edited 1 time in total.
Website, Forum & UTStats

Do you have a full log for the udemo kick?
Top

I have a player getting kicked out from the server.

Player gets error message:
you have been kicked of an internal error during the ACE checks error code = -6 this means that you've either encountered an ACE bug. or your game state is corrupted


Any ideas what to do with this? 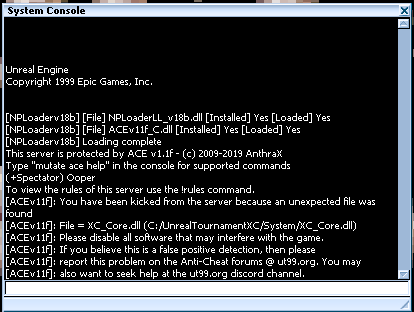 Needs to be whitelisted.