Terraniux wrote:Can this be used in a reversed way? Instead of falling down, they go up?

Sure, I already made it. It's the centerpiece room in the contest map. You know, the one you voted on, played, and reviewed? Yeah, that one. 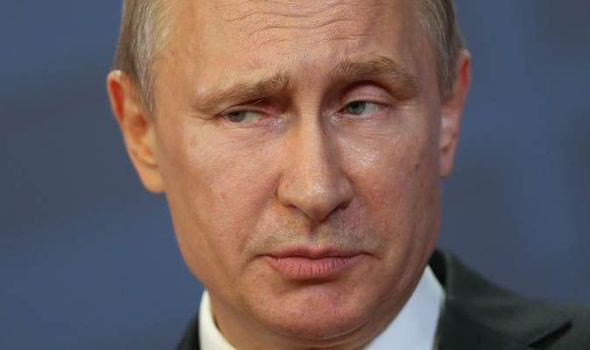 Seriously all you need to do is adjust the falling speed of the rain to a negative number. It will rise then by that speed and behave the same way. This was literally the first thing I wanted to do with it as an effect so I understand what you mean. In the Mansion map it is coded as a separate rain actor set since I had to have specific falling speed for the upside down rain. Since this was different than the default falling rain and I was spawning and destroying the rain actors I had to code it with a set of altered defaults.

If you want this in your own map just place the Rain Actor on the ground/spot where you want the rain to start. Look at the variable for "WindVelocity". It will be

and this will cause the rain to fall upwards at a fair clip. Adjust the Z to your liking. More Z is faster falling upwards, less Z will slow the rise.

@Nog: There's actually a lot of things I was considering creating for this as a set of "plug-in" modules depending on the reception. The base effect I just wanted to be bone simple and anyone can use very easily. That's the issue with most weather effects, they have way too much going on and mappers don't want to take an evening to test seven different setting variables to just create rain. With this you place an actor then hit play and it's raining where you want it to rain.

If this is actually used by mappers I'll make some plug-in effects I've already been playing with. I've worked on rain that drips down a window if it strikes it at an angle (windy rain storm), puddles that grow and merge over time, snow that starts to coat the ground/bsp (winter wonderland) and then can blow in drifts if it gets too thick. There's a bunch of ideas I've had for a more immersive environment.
So long, and thanks for all the fish
Top

Is this similar to the PrecipitationGenerator actor? Or does it do something different?
Join the BunnyTrack.net Discord chat server: https://www.bunnytrack.net/discord
Top

No, this creates a basket of rain/snow and recycles them over and over.
So long, and thanks for all the fish
Top

JackGriffin wrote:No, this creates a basket of rain/snow and recycles them over and over.

Way better. Any time you can recycle an actor, especially one that is going to be instanced over and over, you should. That's been part of the problem with some of the past attempts at weather. They spawn drops that just fall once and destroy. Those don't really get cleaned up until the server does garbage collection when unloading during map changeover. Eventually the server takes a hit as those arrays get huge with wasted actors.
So long, and thanks for all the fish
Top

JackGriffin wrote: ↑
Sat Oct 14, 2017 2:14 am
Now that the contest is closed I'm going to start sharing some of the things that are both part of paper and I's entry as well as some of the things I learned as I was trying to accomplish what's in the map proper.

One of the missing things in UT was good, working, fixed, online ready snow and rain. I looked at all the released weather mods and all of them had some sort of issue(s). Some looked great but didn't work online. Some worked online but were made in a way that wasted resources and the longer they ran the more it impacted the server. I wanted effects that could be specifically placed (not zone weather) that looked right but also was coded correctly. Well, here you go:
RainForUT.zip
SnowForUT.zip

To use just open the mod in editor and place the SnowActor or RainActor wherever you want the weather effect. Once placed you'll see configurations that will allow you to tweak to your desired level. The actors can be map placed like normal but they are also capable of being tied to something that moves. I fully plan on using these with my Ice and Nature Dragons to give a roaming weather effect that moves along with the monsters as they do their thing.

I get an error when I try to run the map. Any suggestions on how to make it work?

Best to know what UT version you're using and did you have any mutators running.
My work for UT99: Counter-Strike VP, MaleOne+ & FemaleOne+ voicepacks, DM-XC-NaliTreeV2 (from the 2012 Xmas Contest mappack), DM/DOM-20AC-CastleGeorgeV3 (from the 20th Anniversary Contest mappack), (NEW!) DM-UFFO
my small spec of files at Google Drive

UnrealGGecko wrote: ↑
Sat Aug 28, 2021 8:50 pm
Best to know what UT version you're using and did you have any mutators running.

I am running the official ut patch 436 (nodelta). No mutators.
Top

If you are using original D3D render take in account that it has flaws. It's not mandatory to change it but... you won't run all sort things in that stage. I'm using it only for testing certain new textures which I might do in MyLevel-s, either way my common renders are D3D9 (often used) and OpenGL - without precaching activated.
Top

Or... just upgrade to 469, which already comes with updated renderers.

Got d3d10 and it works. Unfortunately the 469 messes up on my computer, so I have to stick to the last official patch.

Amazing work @JackGriffin! And thanks all for the prompt replies.
Top
26 posts