Mutator can display information on the screen or in the console. 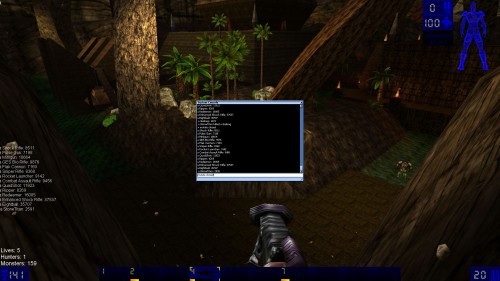 Mutator will be useful for MH, to know what weapons are on the map and find it. It is also useful for finding the latest monsters on the map.

In general, this is more sample code than a real mutator. It will be useful for administrators of MH servers to write their mutators.

I really do like this by looking at the pic of what was there, pretty much expected that.

I'm assuming that the item will still be in the said location even when it is picked up. I'm gonna probably check out the code and do something with this in my MH map.

Hidden elements not counted. So no. If you pick up some Weapon and you do not see it, then mutator do not show it. Checked on dm-deck16][ with bots.
Top

This is fun to play with but the information is fairly useless without a directional identifier. At the very least color code the items so that they are easily seen if they are above or below your current plane. On my coop server the monster radar shows the blips of the monsters as red if they are above where you are and blue if they are below. Even then you need some sort of direction, otherwise you end up circling to find the way by process of elimination. It's going to be even worse if several things are on screen and the distance values are all going up and down at once.

If it were me I'd make it so that the item only shows if your view rotation is facing it. At least then you'd know that it's 400 units "that way".
So long, and thanks for all the fish
Top

It is only proof of the concept. You can edit it. I calculate VSize from vector. You can do something else.
Use Z coordinate for different colors (above/below).
Or add comparsion of PlayerPawn Directions and this Vector.
Or something else.
Also you can draw on screen some hint above item if it visible and on short distance. Like on MH draw monsters HP and monster name above them.

You can select one closest ScriptedPawn for this, for example for do not mess with few directions.

In general you can improve radar in MH and any enemies and other items which not fit radar radius, place on edge of it.
It will be also helpful for find latest monsters.

Also you can draw weapon points on radar too. With different colors.
It can be useful, but you can not know what point mean - Enforcer or SuperShockRifle.
Top

I love the idea of what you are doing, posting code sections with the idea they can be used and improved. Fantastic idea. I'm just adding that several years ago I took code very much like what you posted and made refined radars and HUD overlays in several versions. There's really good floating tags in MH2 for monster health and name (wormbo credit here) and also a radar you could plug any item into by following the way monsters are shown on it. A better version of the radar is in my Unreal coop controller as it has above/below and you can turn on name and distance(CodeX credit here).

I'm not trying to "one up" you over this so please don't take it wrong. I made an ungodly amount of errors and mistakes along the way and if I can save someone that waste then great. You keep doing this stuff because it's exactly what's needed to keep people interested.
So long, and thanks for all the fish
Top

Just two cents.
As far as I know, in some MH2 if you know where the monster is you have to be relaxed and waiting redeemer (always for players), and happily killing monster with no challenge and no sport like a zero skilled one - I don't even see what's so funny then. Statues which I did last time won't show any monster and they might have random locations - for me THAT means MH and the Challenge and NOT predicting enemy - this is the charm in MH, a bit of difficulty. In DM enemy prediction = CHEATING. Me personally I don't need any radar for killing a stupid pupae, seriously...

Some MH map have 100 000 hp for monsters. And they fire for 1500 hp damage with one shot with big splash radius. It is not easy to kill.
Some monsters small and run very fast.
Sometimes ever puppae.
Some monsters have good AI like UT bots (based on it).
Some monsters can not be killed in one shoot of Redeemer.
So not all bad as you describe.
And Redeemer rocket not easy for drive. Sometimes it can be really hard or suicide or teamkill.
But if you want you can create PPL game mode where monsters will come to servers to kill peoples in huge amount.
Top

No, fuck them. Nali too.

DOWN WITH SCRIPTED PAWN!

...ok, cows are kinda cool. They can stay. But not the rabbits. Those things look creepy AF.
So long, and thanks for all the fish
Top

Agree, they should be only on floors... except fliers and Tentacles (not those missing in action).

IF some mapper has a sudden brain deviation with more HP at monsters, let me see... already all MH versions done by self-person have CAPPING option at various values preventing spamming - THAT thing is really needed, but me one I'm not worried about that, Monster is insane fast ? So what ? SetPawnDifficulty (if you know that function) restores monster to a normal value and things can go upper with Barbie's idea about MapPatching tools (my one it's called NavAdder). It's pointless to ruin good maps with tools because 30 craps aka maps are just insane for no purpose and badly messed up...

Let's see another logic story - or whatever. Player playing MH for 2 years probably knows majority of maps. Tell me the purpose for having a radar showing Weapons ? Need more load and more processing ? Else, do we need a Weaponry radar in DM-Deck16][ ? Yeah, a simple question. Player has a clue where the weapon is, to not mention that "secrets" are going in toilette - no more secrets - excuse me, Mr. Mapper, this is the deal here. Perhaps not all mappers are agree to see their concept crapped with mods. I assure you that too much modding makes MH mappers to be demotivated from making maps because they simply don't know how to make a Level with a minimal puzzling - maybe you can light me with some new idea properly rammed in next years of "development".
Maybe my plans will change making map to have NOTHING but spawning random stuff unpredictable just because I already know a lot of maps with their loading/healing spots making game already WAY TOO EASY... Also I can connect these spots into Navigation for making Bot Support possible.

In other order of ideas, let's make a mutator for teleporting player at any weapon in 10000 range, or right to the End or telefragging critical bosses by default - Can I ask where is the game ? Why are we bothering to vote maps then ?
During this time I'll keep MH as it is outta trash Levels because I'm not interested about 100+ mutators loaded...
Last edited by sektor2111 on Mon Nov 05, 2018 6:24 pm, edited 1 time in total.
Top

It is only idea. you can use it or not.
And players also can load UnrealEd or switch to spectator mode for teamview for locate last monsters position.

And many MH maps build not friendly for players which die. You need run from start. Even if you have shortcuts you not always get same collection for weapons.
Sometimes it build for save position mutator. In this case they can be without shortcuts at all.
Top