what is the startuptimer useful for? is it for using 2 scoreboards? at the same time?
Top

I started working on a 102d version of which I have now dumped and am working on a 102e which is a basic continuation of 102b.
102c is a complete conversion from a standard HUD system to a HUDMutator system which is not working out too well due to the many functions that SSB offers.
HUDMutator systems are mainly for small HUD conversions like Newnet Timers and SBU3 basic Scoreboards.
SSB102c tried to accommodate these systems and although succeeding to a degree has caused several other problems in the process.

As for giresun27 and the query into the startuptimer, well this is for when some other HUDMutator has a delay in loading and takes over on SSB, and a delay can be set to re-take control of the situation and should be set from 3 to 9.
However so far this is not necessary and should be left at 0

I will have a stable 102e out as soon as possible.
Top

I recommend properly altering INT file for getting configuration from preferences menu command allowing UT to generate INI file itself and accessing color variables for a better visual ergonomics. I don't get why config vars should not be accessed from preferences menu. Add the damned brackets into script, they aren't costing money, either way I don't think color it's a string, the color it's a COLOR structure according to Core rules, a hard-coded object property which should be left as it is and not redefined as string, doesn't make any sense - squared wheels are not rotating properly...
DislikingAssets.PNG

I cannot even edit those things, variables are not only wrong used but they don't have brackets for external access and creating INI. Color "struct" variables should be seen exactly as they are and not as strings. Watch this:
TheColors.PNG
Here is opened an OS type color interface like in Paint application and user is picking color exactly as it looks like and not based on numbers. Stripped mods are not something which are fascinating for me. Wrong things are hidden and their effects are not predictable making fixing harder. I'm trying to understand what Engine does when some pointer says "Color". Does it move to Core or elsewhere ?

Note:
An RX compilation using UT469 has sent a "compiling-log-warning" when a variable "Max" was conflicting with function "Max" from Core.
You do not have the required permissions to view the files attached to this post.
Top

@sektor2111
Yes I agree about the correct color usage, however I purposely used a string in this case as I need to display this information elsewhere and using a string is far better than converting colors to a string.
It makes no difference to the Admin, the color entry (0 to 255) is the same whether it is "R=0,G=128,B=255" or (R=0,G=128,B=255,A=0).
I do not see why you should comment in the way you do as at the end of the day it is the coders choice, there is no hard and fast rule that you talk about.
Top

As far as I know a variable should not override what Objects/Actor already has. You can use "GameColor" instead of "Color" which is already part of Core. This is what I saw logged at 469 in a similar case - not recommended using names already bound; like a variable vs a similar named function or such mix of the same variables. Either way, color is shown for real in "preferences" menu command if that menu is OPENED for use and variables declared as "config" + brackets and exactly as they are - colors - it doesn't costing money and it's helpful for generating INI right from game in seconds. When a color can be seen directly it's more easy for novice admins instead of numbers - and having chances to do typo mistakes. I don't get what's the problem in using a color exactly as color and not string.
Last edited by sektor2111 on Tue Mar 02, 2021 5:40 pm, edited 2 times in total.
Top

I tested it and saw that, SBU3 only works on DM, on other mods it doesn't work!

now the ssb has no loading problem... but just load sbu3 in the dm

Perhaps you can share source-code for those which want to set things as they consider suitable for their needs, just my thoughts here...
Top

where is the new one to test

Its coming, hopefully tomorrow, and I corrected the string colors

Then let me CHANGE INT file, I don't see this mutator in preferences settings and I don't get why it should not be there.
Edited: Results
Any_Change_NO.PNG
Explaining at dummies:
THESE Values should be configurable from this menu. This is impossible as long as mutator it's not using brackets and "config" declared and it's overriding COLOR "struct" from Core. Me one I won't use such things, if declaring variables properly it's costing money for getting an automated simple configuration then I'm out, good luck with these

. I will decompile this thing another time for writing things NORMALLY.
As example for more brain-light - this is a section from STOCK UT - Editor more exactly
EditColors_for dummies.PNG
Colors are declared there without accessing WEBs and reading poems anywhere.
Picking_Mover_Color.PNG
By clicking on color section on those browsing dots created, a color menu is open, user will pick color as he/she wants. When this menu is closing, configuration it's being updated/created automatically in less than a second.
You do not have the required permissions to view the files attached to this post.
Top

What a pissy thing to complain about... did i say pissy? yeah thats what I ment!

1% of admins "MIGHT" ever touch these settings... and if they do then they can goto Paint get the RGB colours and and post the values into this section.
and yes its FREE!.. comes with every version of windows known to man. 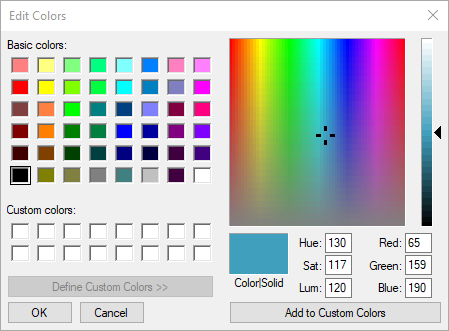 there... you want a nice blue color? no problem...

making lots of Farting noises over something soo... insignificant is childish in itself.
don't like it , don't use it.

All this trouble just for a Game's Title Color, once set once done, in fact just use the default colors.
No admin goes through all that trouble to change colors online.
SSB is about player and game statistics, not some title's stupid color.
So give it a break.
Top
584 posts