There MVE2a with few improvements.

I take as base already improved version by 21. What done:
1. GameConfigs count raised to 512 from 63. Unfortunately there many hardcode about two digits, so really usable only first 99 of it. Possible need reduce limit to it.
Possible issue:
1) Admin tab blowed up with 512 items on it.
2. Add option Tickrate for each GameConfig. And DefaultTickRate globally. But not sure if change on fly tickrate applied on map change. Anyway be request of it.
3. Add option ServerActors for each GameConfig, which allow spawn some actors, without try add it to Mutator list, as do option Mutators.
4. Add option bAvoidRandom for each GameConfig. Done in really dumb way. Random still same, but if pick game mode which forbidden random restart. Up to 1024 times.

5. Map vote track found maps (list of 16384 maps) and use this for determine which maps add last. After that 32 of last map appear on list, visible by default. So if add some new maps on server, it is good promoted.
Possible this stuff bugged. Known possible issues:
1) if you use some filtration of map list, wrong list of new maps.
2) If you turn this option on, map vote not able know what maps is last, so you need reorder M array manually if you want proper order for previous data.
3) Config files really huge.

Also found we lost some improvemnt. Work on restore it.

- Fix issues for build new maps list.
- add script (windows) for make list of maps by modified date. For first use in Ini file.
You do not have the required permissions to view the files attached to this post.
Last edited by Buggie on Sun Apr 03, 2022 7:49 pm, edited 1 time in total.
Unreal Tournament v469c - Release public released!
First Vehicle CTF server for UT99

Cool I was wondering what this server MH would be. Thank U.

Sounds very nice, ServerActors for each GameConfig is amazing! I will try it soon.

One question, how to enable red maps for a GameConfig (Cooldown)?
Example with Higor's mapvote (CacusMapVote) where you have "bNoCoolDown": 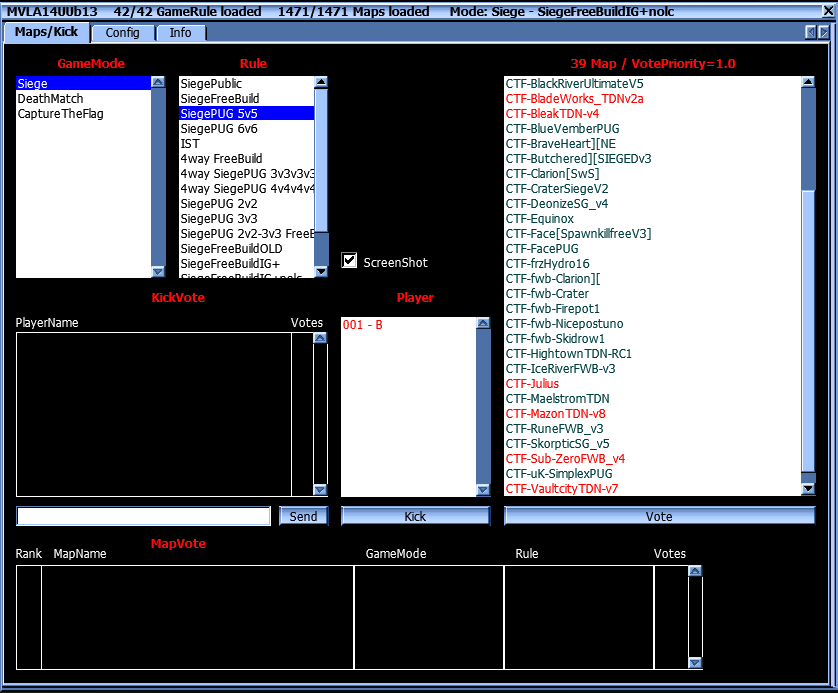 Hi @Berserker, from what I can tell, it can be enabled with by configuring 2 properties in the ini file

But we don't use this feature, I'm not sure if it works properly. I tried to get it working now but couldn't manage to. Maybe you have better luck.

Edit:
Managed to get it working but only by patching a piece of faulty code.

Untitled.png
I've created a patched new version that should help with it. Though I did not get to the root of the problems, this is just a band-aid over it. However it might allow this map cooldown feature to partially work for now.
MVE2c_v3.zip
Also:

I've done some testing of this latest version of MVE, I can confirm that 100 gametypes are working, but I couldn't get anything above that working. Just something to note in case you're planning to set up a lot of gametypes, you might run into MVE breaking after the 100th gametype.
You do not have the required permissions to view the files attached to this post.
Top

Wow tnx a lot for the fix!
Visit us on Discord:
https://discord.gg/fcRakgNCjR

Not really related to mapvote. UT very bad at render text, and there a lot of texts. So it can not be fixed from mapvote side anyway.
Unreal Tournament v469c - Release public released!
First Vehicle CTF server for UT99

But this is not happening to MVE2 and MVE2a.
Top

- this improves peformance
- this was the supported count in MVE2c as well, using gametypes 100-511 broke MVES
- I manually tested gametype slot 99 and works just fine!\

- only shows each new map once! this way it's indeed a map list and it's easier to understand what it is
- voting it will vote the first gametype the map is used in
- if you want another gametype you'll have to search for the map under that specific gametype
- text only shows mapname without the gametype prefix

What's the purpose of the logo?

Will investigate this, I noticed it too now, there are some bad array accesses in client mapvote cache.

Hah, you're underestimating us. We might actually reach 512 some day.
You do not have the required permissions to view the files attached to this post.
Top

this feature has on almost all vote maps, just to show a photo when opening votemap... 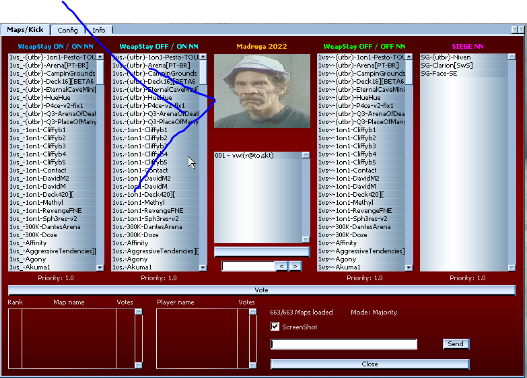