Bots are way more predictable now and barely dodge as much as before. I kind of like the previous versions better. Could you give me the old v3 version please? I didn't save it

Visit us on Discord:
https://discord.gg/fcRakgNCjR

You sure about v3? Maybe you talk about another version? v3 from v4 different only in order process warshell attack. No warshell - no difference.
If you not play redemeer arena, there no difference.
Unreal Tournament v469c - Release public released!
First Vehicle CTF server for UT99

If you need crazy fast dodge (which not natural, and can not reproduce by humans), you can use something like:

Maybe I not know something, OFC, but my calculation show next:
0.35 is absolute minimum for run second dodge after landing. 0.2-0.25 is maximal delay between two presses movement which take in account as dodge move.
So you physically not able dodge 0.55 seconds at least after landing. And this not take in account ping.
And i Make 0.5 seconds for each level skill. So Godlike use perfect dodge cooldown (0.55 + random time from timer fire - 0-100 ms). Each next skill get 0.5 seconds for colldown more. But not more 2 seconds (hardcoded).
In v0-v2 it be 0.35 + 0.15 IIRC. Which is my mistake. Because real Players need press keys. And they not able do dodge near after 0.2 seconds from first press to last press.

But if you wanna cheatish bots, which dodge as bunnies - go ahead.

Also first versions not use landing timer. It is just set timer at dodge start. So if dodge too short they not able dodge more time, then should. IF dodge long - they able dodge immediately after landing.
Which is too not how work for humans. For humans only after landing start counter for 0.35.

And I am not keep old versions. So this is best what you can get.
Anyway there some other improvements, so return to old version is pointless.

For example now with FarAttacks bots kill snipers on Face Towers.
And Snipers on Face Towers really start kill enemy on respawns, like humans do.
Also now takedown redemeer rocket can be do during movement. Limited, but better from stand still before.

Since dodge time and dodge cooldown not connected. You really able dodge in 0.35 seconds if very lucky and use very good timing. It be godlike.
For make such dodge, need make first press during cooldown, and next right after cooldown end.

Since average skilled player dodge once per second, I set this as base level for masterful. This get 0.3 for delay between skill steps. So On masterful it be 0.95. So near 1 seconds if take in account timer approximation.

@Buggie, make that TimerNum factor for all features and make all configurable from ini, please.

could SmartStockBots detect nodes that are 120uu high and doublejump to them if bDoubleJump=True in .ini?
then in maps like DM-DavidM2 where belt is , bots could jump up there. 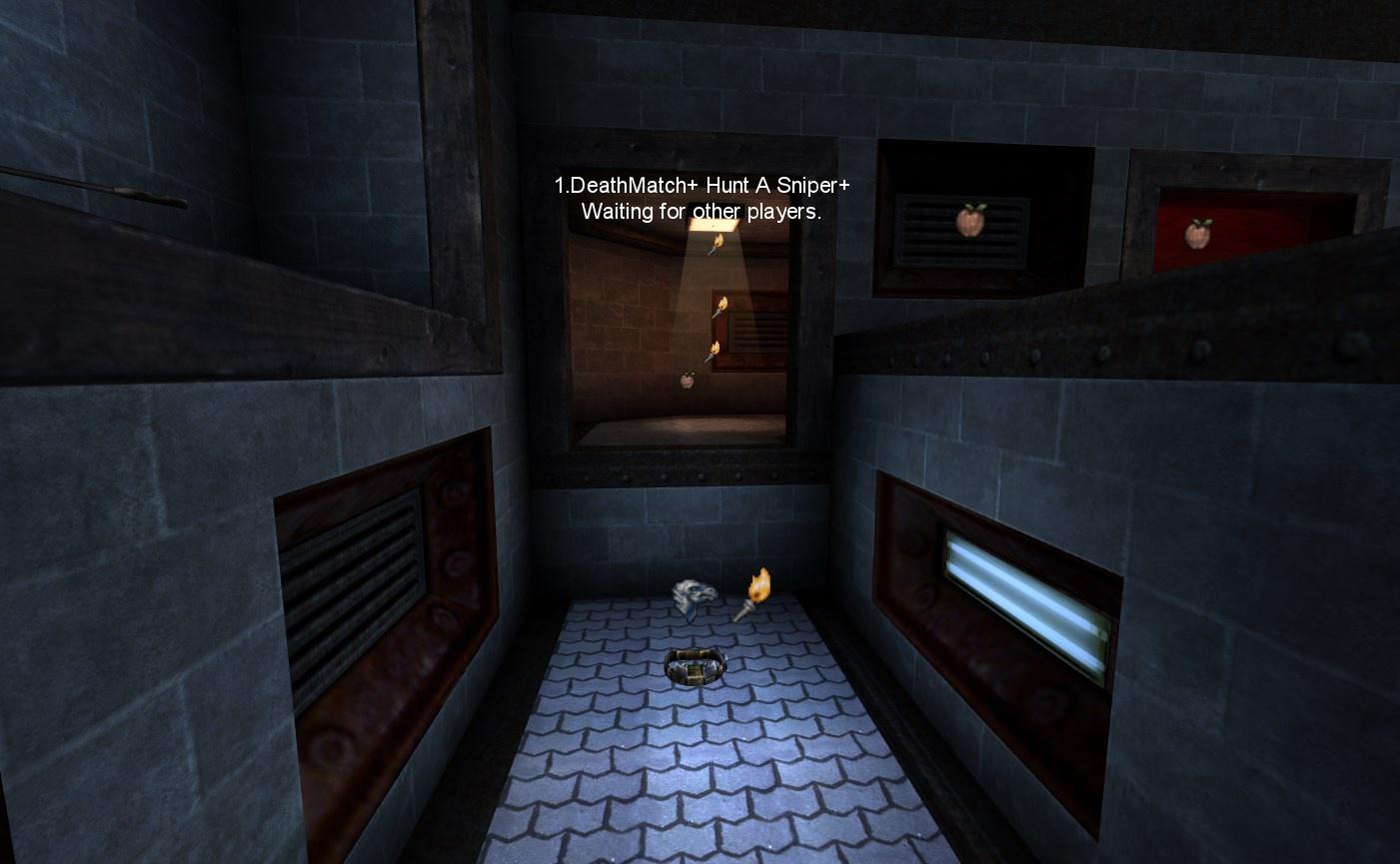 also if nodes are further apart could we have a small delay between jumps?
wishful thinking here hehe.

Long Answer: There no such thing as double jump. And no thing as jump or dodge for bots. It is just set velocity to specific values and push bot in falling state.
So, this is mean bot can do this always. In exact way as coded, regardless if there present double jump mutator (any from big count of it) or no.
Also this stuff be hardcoded and can not match with stuff which do mutator of double jump for players.

And now about paths. What if there slope on which bot can fall? What if there deadly laser? What if somewhere (between, after) deadly lava?
You can not make solution "fit em all" for all cases, on all maps, on all usages.

If bot reach goal and finally reach this point. What if this point exists on island of path nodes? This mean no other ways from this point to flag, enemy or other game objectives.
Bot simple lost. Since bot not do suicide, it simple out from game.

What if bot try and fail here? It try jumping again and again? Need add memory. And during this attempts bot is easy target.

Also bot not just walk as blind kitten. If bot not wandering, it move from current point to goal. By path defined by paths network.
What chance bot appear here? If it finally appear, how we must determine if this thing what bot need to?

If such jump during combat is ok? During retreat? During chase enemy? During collect items?

There too many pitfalls for do that. Unfortunately bots not just another controller which push levers and pull the strings. It is completely new entity which emulate stuff for mimic player behavior. Not in all things, but in many. In jump for sure.
So you need hardcode some implementation, which can not match with stuff used for players and can produce side-effects.

I'm not sure if you understand that are needed PATHS for making Bot to go somewhere. There are needed two conditions:
#1 You need a Special or jumpy path - perhaps you can create it somehow...
#2 You need some fake item spread around that spot for capturing Bot's attention.
Alternative
Injecting Triggers for causing a jump in certain conditions - which means private patches for certain maps. I'm not sure how much is doable in a simple mutator except when is about a long INI file with more vars and deploying additional directives. Generic common directives are fixing one thing and damaging another one. Like Buggie said, there are too many pitfalls.

Old UT Veteran wrote: ↑
Sun Sep 25, 2022 8:40 pm
For complete bot overhaul, you need a new bot, which then will break most if not all support from 3rd party gametypes and mutators. Closest we had was Ferbotz, which are great... but not updated in 2-4 years now. They also have their own issues and bugs now seems like.

The thing is that such mutator was helping me to solve some homework which I have started in my MBot types. Now I simply don't need to change anything at them, mutator does what I needed. Actually MBot is mainly a Bot with very few exceptions concerning roaming rules and code wrapping. I think this is why to me this mutator works properly - yes, I edited it with a random timer and translocator on purpose. In Off-Line mode all that stuff with game ended was not helping me, I just quickly start another match, maybe too fast and I don't have time for reading what Bot wants to "explain" at end of match. They simply give me lessons how to ambush them and finding the right spot to do that. Game is changed and this is just great.
Top

If anyone interested in next things?
1. Set visual ping to bots.
2. Remove mark bIsBot from it.

If this done, bots in most scoreboards looks as humans.
Know side effect
- you stop see they orders in scoreboard. But can see it via voice menu anyway.
- some players start think it is humans.

Once one player say to me:

If this done, bots in most scoreboards looks as humans.
Know side effect
- you stop see they orders in scoreboard. But can see it via voice menu anyway.
- some players start think it is humans.

Once one player say to me:

Make setting in .ini to use these features or not. SSB already has this feature as well as flags. I turn them off and have custom country for bots. A.I .You could have a few extra hello/goodbye effects.
Like if a player says Hola.. then bot can reply Hola.
Also when players say bye or cya then bots can also say bye and cya

Maybe even hello/goodbye in your language as well

As result:
- some players think it is humans and can left play.

14. NotMarkAsBot
Not mark bots as bots

As result:
- some players think it is humans and can left play.
- In scoreboard you not see anymore bot orders. But it is stil accessible via voice menu.

Que wrote: ↑
Tue Sep 27, 2022 10:38 am
A.I .You could have a few extra hello/goodbye effects.
Like if a player says Hola.. then bot can reply Hola.
Also when players say bye or cya then bots can also say bye and cya

Maybe even hello/goodbye in your language as well

Have you tried this mutator where bots talk to you?
UTBots

I not really want talkative bot in game. It is interrupt possible really important players messages.
So mutator, like you show above, is funny, but childish.

There bot say "hi" by simple reason - you can easy see - someone join to game.
OFC it can be done with other ways, but this way too ok.
Also it look as little easter egg.

With GG - it is more like entire easter egg. And this not invasive at all.
Same as taunts. I especially pickup not abusive taunts and use only it. For make mood in game more friendly, not more hostile.
Bots happy for win, but not laugh at your loose.

If you want set other hi/gg messages you can look into ini.
You do not have the required permissions to view the files attached to this post.
Unreal Tournament v469c - Release public released!
First Vehicle CTF server for UT99

is interesting for trolling players

More fun to play with bot that behaves closer to human behavior. Funny enough, you will never expect a bot to get a lot of kills on big maps.
Now its a possibility, and it works very well. I know I'm gonna have fun with this:

Set dessloch to 100% accuracy. Enemy team could not turn the corner of the tower sometimes. Red team could not defend the base at all and blue bots just walked in

Match finish in 3 minutes and bot got 45 kills - That is crazy. You pay attention and see the frag count just go up all the time.
Top
91 posts