InstaGibAll is compatible with custom weapons and arenas, just include the mutator in your mutator list.
UPDATED.
You do not have the required permissions to view the files attached to this post.
Last edited by de1337ed on Thu Apr 02, 2015 8:29 pm, edited 2 times in total.
Top

thanks, it looks funny !

Updated per suggestion in the ComboGib Lite thread.
Top

Tried the WeaponsGib and then deleted it. Liked the idea in theory, but you can only have one of those weapons loaded at one time... rather than all so it was a bit too many files for my tastes.

Surprisingly so. The InstaGibAll is insanely powerful.

Standard instagib takes off 1,000 health from anything it hits, as evidenced why it can't kill the bigger Unreal1 monsters in 1 shot. Ferali made his NW-instagibs much stronger than that but not much as I tested them on a map edit Hook & Meat requested · viewtopic.php?f=5&t=4133 · with monsters on it that could survive multiple redeemer or instagib hits.

Basically they beasties on that map have over a million health each.

I tried InstaGibAll on that map, and despite having a million health, this mutator enables 1 shot-kills on them!

Also, on a positive note, it even effects models with weapons built in. I recently added the good old Team Orbit mechs back in my bot setup, and even though they don't use standard UT weapons... 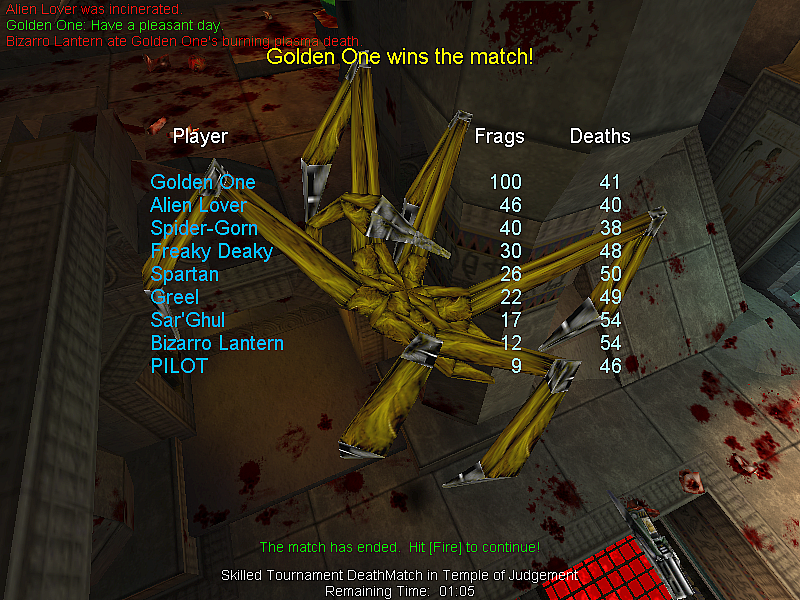 I tried the WeaponsGib mutator ...UT froze up every time and I had to use the task-manager to end it.
I have Mr Loathsome UT tweak and wormbos enhanced items running as default.
-=: http://jokercologne.deviantart.com/ :=-

Iam assuming that it was conceived from Sektors post recently? If so cool

Perhaps we could diversify it somewhat?

..So basically what we have here then would be , a fully customizable weapons mod with the ability to -
1. Declare Which Weapons we wish to use and remove those we don't
2. Define the Strength of Chosen Weapons (1 -> 1,000,000) ~ watever.
3. Define weather the Weapon needs Ammo / Weapon to be picked up in Map?..
4. or Just Unlimited Ammo and kill all instances of ammo from map for selected weapon.
just throwing a few idea's out there , great concept

Only you can kill it if is killed by other of the same type, because the damage is InstaKill, the game forces to gib you when he hits you, even in ghost or god mode.

That's depending on that pawn code... else MBot hates cheaters and put down their ReducedDamage, LOL.


Wises wrote:Iam assuming that it was conceived from Sektors post recently? If so cool

I have only completed idea for "players" which wants them. Toying with such mutators I ended a MH game very fast... it's pointless and 0 challenge to not mention that is not an option for servers. While some player downloads stuff, other 4 guys are just voting maps as long as MH-DarkPass like maps are a kind of None hunting subject. Now you understand why I don't need such "tools" ? Simply I could do many overpowered items but I don't see the logic side of doing feign play.
Top

I got this idea a few years ago playing ComboGib. It started out as a "what if" scenario where I made a mutator that consisted of Shock Arena + Damage Amp. Basically, what I got was a lightweight version of ComboGib. Then, I made the same thing for all weapons and it worked. I removed the amp's lighting effects and it looked liked instagib. The only bug left was bullet weapons not gibbing players which I fixed by specifying the damage type for all weapons.
I found out that creating a special inventory item based on Damage Amp was unnecessary and I could just use DamageScaling. Thus, this mutator was born.
The original version used the ModifyPlayer function instead of CheckReplacement.
Top

papercoffee wrote:I tried the WeaponsGib mutator ...UT froze up every time and I had to use the task-manager to end it.
I have Mr Loathsome UT tweak and wormbos enhanced items running as default.

What about this problems?
-=: http://jokercologne.deviantart.com/ :=-

InstaGibAll works with all weapon arenas. Add both a weapon arena mutator and the InstaGibAll mutator (e. g. Flak Arena and InstaGibAll). You'll get the same effect. This way I don't have to code separate mutators for every custom weapon (this makes WeaponsGib mutators unnecessary).
Top

de1337ed wrote:I don't have to code separate mutators for every custom weapon

It doesn't need any custom separate mutator and neither any setup for any INI file.
Let's say that we have 2 kb added as a server-side in STOCK games and similar a mutator for developing the same effect as InstaGib for ALL stock weapons (and probably not only Stock but addressing mainly "PLAYERS" ).
InstaDeath.zip
So to speak InstaDeath.DieFast it's server-call and Player call has in mutators list An InstaGib Replacement Mutator.
Go figure...

Edit:
Added a version ignoring armor rules (UT_ShieldBelt)
InstaDeath_NoArmorRule.zip
See which one does match the tastes.
You do not have the required permissions to view the files attached to this post.
Top
14 posts • Page 1 of 1