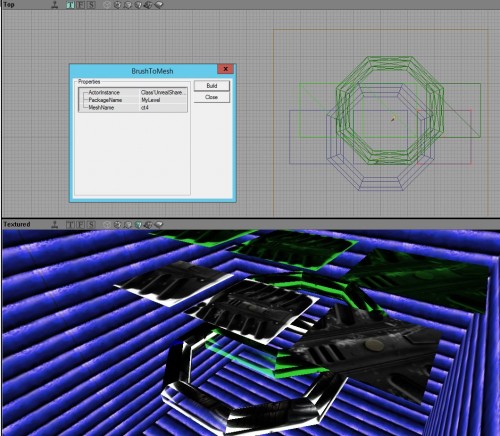 ...it got even the transparent part correct in the mesh?!!
-=: http://jokercologne.deviantart.com/ :=-

Some things to consider:

- XC_Core must be added as EditPackages in order to make the BrushBuilder hook work. (same installation instructions as a custom brush builder)
- The converter shows up among other brush builders using the generic icon and the following must be considered.
-- One brush must be selected.
-- The default actor class (if none) will be UnrealShare.Knife.
-- The default package (if none) will be MyLevel.
-- The brush name must not be in use, otherwise you need to use a different name or reopen the editor.
-- It doesn't create LOD meshes.
-- If you're creating a mesh somewhere other than MyLevel, save the other package first and make sure the mesh actually got saved (otherwise your level will be unloadable is you save).
-- Brush scaling is ignored so the output will look like the unscaled version.
-- Any textures beyond the limit (8) will be scrapped from the mesh.
-- The mesh faces must be contained within the texture bounds due to UV mapping format limitations, will implement triangle splitting in the future if possible.
-- There are 3 vertex merging modes (VM_60Deg is default and best looking):
*** VM_None: no merging, face lighting look flat.
*** VM_60Deg: faces that have similar angles will merge common vertices, light looks seamless on curved areas of the mesh.
*** VM_All: all matching vertices are merged regardless of the angle.
-- You can optionally flip all faces and make the mesh look inside out.
-- All mesh compatible surface flags are properly taken from the brush (unlit, translucent, modulated, masked, 2 sided, no smooth)
-- Invisible faces are scrapped from the mesh, so no 'weapon triangle' for you.

Why does this happen ini? 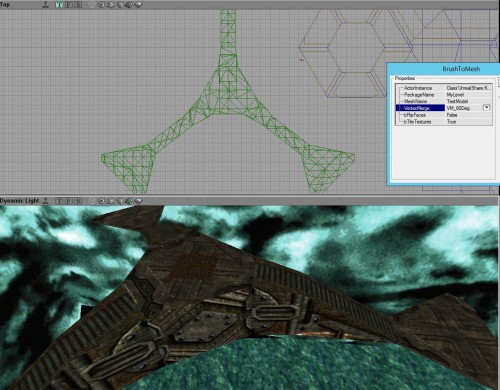 It seems to be something with your settings. Just rebuild the ini and make sure the server is off, upload the ini, and then turn it on to be sure the changes are saved.

On the other hand... Yeehaw! Mesh Partay!
I do notice the mesh were invisible for me in the dynamic/texture viewport, but assigning a texture to it made it visible. 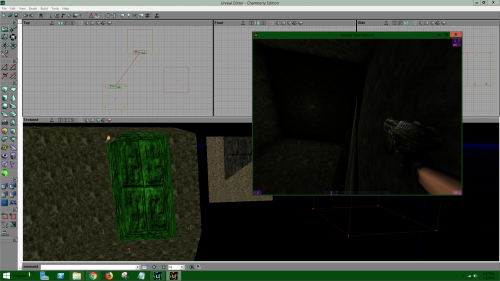 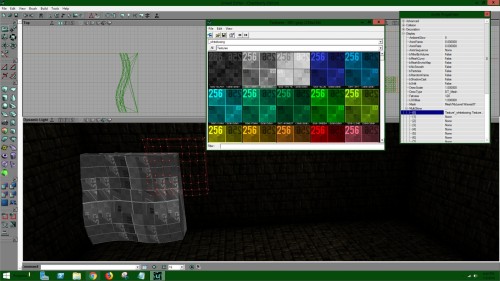 Hi, apologies in advance for derailing this thread a little, but the thread is 69 pages long and it’s difficult for me to parse all the technical information contained in it

1) My initial impression was that the XC_Engine is a set of improvements – and a Herculean amount of work by Higor – for server-side use.
2) However, the latest posts indicate the absolutely tantalizing promise of being able to convert brushes to meshes with the editor. This suggests client-side use.

Are both things true? Would somebody be able to be able to provide a concise summary of XCGE?
As someone who's attempting to create a map, this brush-to-mesh feature is of particular interest to me... and would love to see a tutorial on its use if/when possible.

On your UT it will apply the script patching if you're playing on standalone mode, which are also server features.
You'll notice them because your log spams less and monsters/weapons behave a lot better.
Your summon/viewplayer/get commands will be improved as well.

One major client feature is the memory integrity during gameplay.
Badly designed window systems like NexGen will never crash your game when you attempt to switch to another map/server (happens a lot with admins and moderators).
And games that go on for more than 1 hour won't make your UT freeze for a long time when you close the map (also, memory won't infinitely go up during these long games).

You'll also notice there are specific mods/mutators that only work in UT's running XC_Engine due to the use of extended script features.
See the second and third download In this post: viewtopic.php?f=15&t=11947&p=97075#p97075


EDIT===
Forgot the most obscure change:
- TBoss mesh has the running notifies to the siderun and backrun animations, they're no longer silent.
Last edited by Higor on Wed Jan 03, 2018 8:39 am, edited 1 time in total.

Thank you for the clarification! Very cool, I will be sure to check it out!
My UT stuff: CTF-Panamax | Octane Boss Skin | Diesel mkII Boss Skin | Gaspack Voicepack
Top

fudgonaut wrote:Thank you for the clarification! Very cool, I will be sure to check it out!

Will do, but a couple more n00b questions first - do I need to install all of these:
And to install them, do I simply unzip them to the /UnrealTournament/System folder?

Chamberly made a install guide for dummies (for me) ...I have to find the link again.
-=: http://jokercologne.deviantart.com/ :=-

papercoffee wrote:Chamberly made a install guide for dummies (for me) ...I have to find the link again.

Cool - I found Chamberly's install instructions on page 58 of this thread.

Great - thanks for your help!

So I believe everything is installed correctly (after installing, I am able to run the game and editor without any issues so far). However, I do not see the BrushToMesh button when I start the editor. My guess is I have to add a line to UnrealTournament.ini:

I tried EditPackages=BBBrushToMesh but that did not work. Thanks again for your support and your patience.
My UT stuff: CTF-Panamax | Octane Boss Skin | Diesel mkII Boss Skin | Gaspack Voicepack
Top

That did the trick!