Tutorials and discussions about Mapping - Introduce your own ones!
Post Reply
81 posts

Ok what I meant was if the upper class always make the lower class act the same way all the time.

Now don't edit and make new stuff just for me, but I want to use what I had setup (but done correctly) then edit the defaults if I want it to work at the same difficulty as it is now.

Plus you are correct in that it's a pretty nasty pawn, so don't judge it by that MH map usage, I really want it to make certain areas of SP (or MH) to be really hard, and not a lot of them. If you make it adjustable, I would need is to edit the defaults for highest difficulty, if needed.
Binary Space Partitioning
Top

Red_Fist wrote:They both work off the upper top class of the tree "skaarj" as a subclass but only a different name.

And a different name means also a different class. Let me repeat the code fragment of function PlayWaiting() of parent class 'Skaarj':

You did not overwrite that function, so SkaarjPunisher parent's class function (namely "Skaarj.PlayWaiting()") is executed. Then the condition in line 1 is NOT true, because the current object (namely class'SkaarjPunisher') is NOT a 'SkaarjWarrior' nor a child class of it. Because of this line 4 is executed and chooses a wrong animation. That's not a big deal, but it is a bug.
_______________________________
While messing around with the ScriptedPawns I noticed that none of the monsters of the AKcoop package have code. I really cannot understand why you MyLeveled that instead of just using the package...
"Multiple exclamation marks," he went on, shaking his head, "are a sure sign of a diseased mind." --Terry Pratchett
Top

I see, so those parent classes DO have specific code for a subclass name, I thought because we CAN make subclasses whatever I change is not affected, like a pawn is a pawn, a deco is a deco, so ANYTHING I change would be the end all, say all, so long as I don't try to make a deco work under a skaarj or pawn or navpoint class. I am assuming I could never make a top class, such as Skaarj, or keypoint, or pawn, I thought all of them below could be copied straight away, but change it's references in the code.

So, one could say, you can only add code to subvert the above class code ? It has to negate previous code with new code ?
As opposed to thinking, all I need to do is copy the text and it will be fully independent , so long as I use a new class name. ?

I Myleveled the AK stuff because it has other mutator stuff built in, All I wanted was ,a pawn.

AK is a problem because it does other things that you can't stop.
Binary Space Partitioning
Top

Red_Fist wrote:I Myleveled the AK stuff because it has other mutator stuff built in

Yes, it has, but the mutator does not get active if you don't force it.


Red_Fist wrote:AK is a problem because it does other things that you can't stop.

For example? Or is there already a thread about this here in UT99?
"Multiple exclamation marks," he went on, shaking his head, "are a sure sign of a diseased mind." --Terry Pratchett
Top

Red_Fist wrote:I Myleveled the AK stuff because it has other mutator stuff built in

Yes, it has, but the mutator does not get active if you don't force it.


Red_Fist wrote:AK is a problem because it does other things that you can't stop.

For example? Or is there already a thread about this here in UT99?

Gametypes problems I thing, plus they drop stuff I don't want, can't remember exactly all I know is it messed me up on some other thing, plus you can't place pawns unless I use the modified one.
I only wanted the pawns, and to be handy in MyLevel for other maps.
Binary Space Partitioning
Top

Red_Fist wrote:I only wanted the pawns, and to be handy in MyLevel for other maps.

But as I already stated, they are all lacking the code so that they are more or less useless in the current state. Some even don't make damage to players.
"Multiple exclamation marks," he went on, shaking his head, "are a sure sign of a diseased mind." --Terry Pratchett
Top

Probably because I changed their default projectile, the stock AK projectiles are still in the map, maybe not the Mech.
But I made 2 or 3 pawns using them, to keep them in the map.

The AK flies I changed , they used that "dart" and "fireball" I think there is one other, I used on one slith in the first room, straight back from the door by back wall I assigned one to it.

I changed those at the last minute, just assuming no problem by changing the projectile for the AK pawns, I didn't want to try and make new projectiles for them.
Binary Space Partitioning
Top

I released a fixed version of this map. If you encounter further issues, please let me know.
Changelog in a nutshell: See also this post.
"Multiple exclamation marks," he went on, shaking his head, "are a sure sign of a diseased mind." --Terry Pratchett
Top

Re your info file for this map - Asgard2 is by Asgard - website is http://www.angelfire.com/empire/napali/.
Top

Okay, this is a very brief review... there's a longer one in the works.
- Visually beautiful.
- Good bot pathing.
- NOT ENOUGH WEAPONS!!!!

I did say it was brief, but to slightly flesh that out a bit... it's weird to not have more weapons near the start of a map where the monsters on said map are supercharged and enhanced. If I didn't go in with backup like Golden One (the mech) I'd've been a lot more slaughtered than I still was. 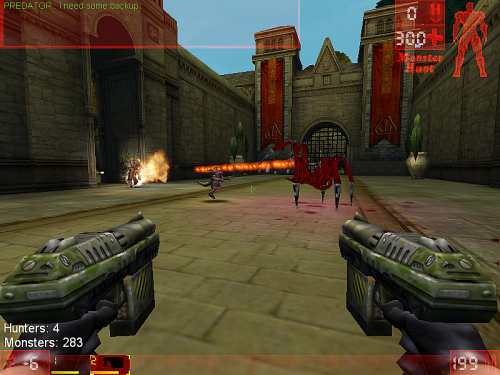 After a number of tests, the Food Fight mutator specifically for MH is the best weaponpack to use for this map.

For 2 reasons:
- You get all weapons the moment you start, and each time you respawn.
- You can throw the brocconade over the top of walls so it explodes in areas you haven't got to yet.

Also, unless you're unusually hardcore... this is not a map to play all by yourself. 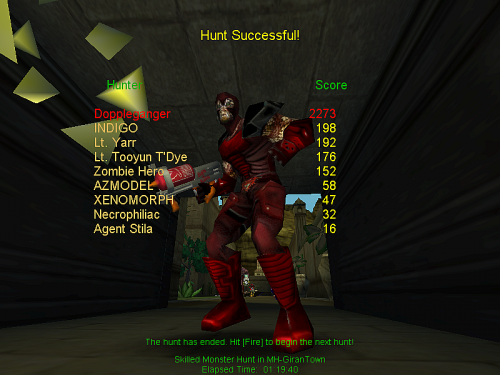 "Also, unless you're unusually hardcore... " would be me. LoL

Just don't shoot the damn barrels. or any deco , isolate pawns so any deco don't get shot or broken.
Then work your way up getting other weapons and 150 barrels to get the super shock rifle.
The objective of this map was to make you play carefully and not run n gun.
Meant to be hard.

It is hard, but Theoretically without the deco, the map would be easy to beat.

Thanks for the review, I wasn't expecting that.

Red_Fist wrote:It is hard, but Theoretically without the deco, the map would be easy to beat.

There's a few SkaarjPunisher that aren't in boxes on the map. Plus several enhanced monsters in each area. They make it nearly impossible to have a fair fight, especially given that for awhile the only weapon you've got is dual enforcers.

This wasn't the review.

I'm working on one, with several screenshots, to be posted to my lil' Unreal-Games community on livejournal, to be linked each place I posted Thunderbolt's request to complete this map.

So everyone can see what I think of it, and check out your very excellent work.
http://unreal-games.livejournal.com/

Red_Fist wrote:Just don't shoot the damn barrels. or any deco , isolate pawns so any deco don't get shot or broken.


EvilGrins wrote: Also, unless you're unusually hardcore... this is not a map to play all by yourself.

I have tried - so far I have managed to do the first four or so areas. I don't use default UT weapons though (instead I use CSS Weapons and summon a scoped assault rifle at the beginning to go with my starting P90) and, following Barbie's lead, I have modified the skaarj punishers' projectile so it is less deadly (because I think there are just too many of them to deal with if they fire their original projectile).

I try not to break any decos but this is difficult since some are always broken by enemy fire and then the problem is having monsters behind me as well as in front. Rather than throwing stuff over the walls, I shoot as much as I can through the gates before opening them.

So it is challlenging but good fun - must spend more time on it soon and see if I can complete it.
Top
Post Reply
81 posts