MonsterHunt in an Ant-Farm

Do you search a certain mutator, mod, skin, map, everything else?
Post Reply
7 posts • Page 1 of 1

MonsterHunt in an Ant-Farm

I played the map only once, online, years ago.

It's an Ant-Farm, filled with an INSANE number of pupae.

Got no idea what it's called.

This ringing a bell to anyone?
http://unreal-games.livejournal.com/

I remember this being a buggy map... wasn't bad though.
My work for UT99: Counter-Strike VP, MaleOne+ & FemaleOne+ voicepacks, DM-XC-NaliTreeV2 (from the 2012 Xmas Contest mappack), (NEW!) DM/DOM-20AC-CastleGeorgeV3 (from the 20th Anniversary Contest mappack)
my small spec of files at Google Drive

UnrealGGecko wrote:I remember this being a buggy map...

This map version here is little bit different in setting:

I was wondering (been too busy to play it yet) if the reason the map has issues is that it's using a custom pupae instead of the one that's in Unreali.u, given the map has a Pupae.u file.
http://unreal-games.livejournal.com/

Warning: The above given ZIP archive

contains crap files - you should not put them into your UT installation. The contained file MH-BukieAntFarm.unr has only MonsterHunt.u as an non default dependency: 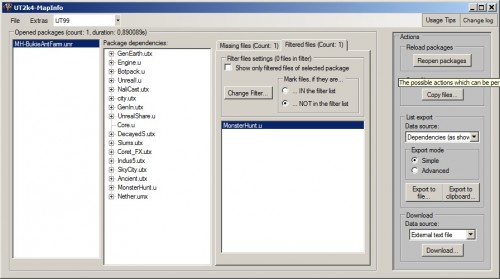 All other files in the archive are crap:

I have seen a lot of ZIP archives with such nonsense files in it (nearly every file following the name pattern MH-Mapname.unr.zip at Medors place for example, see also Lousy Map Package Archives).
"Multiple exclamation marks," he went on, shaking his head, "are a sure sign of a diseased mind." --Terry Pratchett
Top

Barbie wrote:All other files in the archive are crap:

...
including all those UTDMT maps having UTDMT.utx file which has no usage, just potentially causing another mismatch - you all should DELETE IT rather than keep sharing bullshit. Whoever released it in initial/first stage/map has mental problems and this it's not helping UT after all.

To light you up about Barbie's post, as a sample "Pupae.u" having NOTHING with maps shared has some sort of Pupae pawns/actors: ElectroPupae and EnergyPupae (mention "a EnergyPupae" not "an EnergyPupae") which I've used in my Sk_Godz but imported in MyLevel and happily screwed and without credits granted for this perfect dumb sh!t super-shared in archives. Why ? Because they were "fascinating" as retarded as they were manufactured. By using a "JumpZ=1500" default value they were mainly jumping into hazard zones being less harmful for player - closer to USELESS in such "hazard environments" (recommended by Shrimp, btw, in his original MH description). Of course, hazard kills in MonsterHunt might break Counting with default Counter which UT has - and now draw your conclusions about "custom stuff". But these "mapping essentials" aren't explained NOWHERE just the how to be a super super artist doing junk files used as maps and mappers need some techs as well because we have bunches of the same info and nothing about Dark Side - I mean Anakin EditorWalker (imagine a struggled breath coming from under a pink mask

and a kid using it as a baby poty ). Hey, PowerGamer (tutorials maker, cough), how goes things with that teleporter having 6000+ UU radius, can you recommend us your drugs dealer or it's another "trade secret"?

Fore mentioned (Ant Farm) map works somehow with 4 people. If a dude number 5 is touching that Camera's trigger (in whatever original map) he will not get camera view because UT has a touching system = 4 - a hard-coded limitation of default trigger - GOOD Luck with these cameras and "happy new year" for mapper using this stuff. I did a similar configuration in some map sampled in this forum (MH-Frigate_R14 - if I well recall) but fully operational even for 20 players, if that thingy did not capture too much attention is not a loss for me, but it might be for you. This will be an option depending on packages used - problem stands at Cannon VS ScriptedPawn generally, again, stuff over-shared for doing more damage to people's servers VIA "TeamMonsters.u" stupidity and such things.
Top
Post Reply
7 posts • Page 1 of 1