Since we have all the source, I take it you don't mind if we mess with it, right? I like it a lot, but of course I always like to modify things.
Top

Downloaded it and will test it now.
-=: http://jokercologne.deviantart.com/ :=-

UTX wrote:Since we have all the source, I take it you don't mind if we mess with it, right? I like it a lot, but of course I always like to modify things.

Well sure, knock yourself out.

I would only ask that you rename the class to something different, to avoid mismatches and confusion.
There are just a handful of spots in the defaults section of the various UC files where the class name is
hardcoded.
blarg
Top

If anybody tests this, I would like a bit of feedback regarding the way I enabled toggling the laser length hud
display on/off while in non-zoomed mode. (It always displays if zoom is on.)

It does toggle on/off a bit fast, but I just stuck the line of code that does this into an existing timer in the state code.
Came up with that little bit the same day I released it.

More than likely the response on that could be smoothed out fairly easily.

Is that technique something anybody has seen in other weapons before? (I really didn't look at ANY weapons code but Epics when writing this....)
Do not recall seeing it before while playing myself, but I may have at some point, and only my subconscious remembered.

It is just tweaking a boolean variable to toggle that hud variable currently, but it could do a whole lot more.
Maybe toggle the projectile for AltFire? Maybe fire a 3rd projectile? Toggle more stuff on the hud? etc.

If anybody looks at the code, there is just a few lines that enable this. Am I doing something horribly wrong with it?
(Or anywhere else in there?)

ASLYE02 reported the only glitch so far. (Good eye. I hadn't even noticed it myself.)

The gun doesn't fully extend to the waiting position after using primary fire.
If you tap the alt fire on/off, it extends all the way. Interestingly enough this glitch does not happen online.
Since I eliminated the scripted texture displaying the ammo count on the side of the gun, this is not a major problem
Although I would look into correcting it if some other issues show up that warrant an update.

Sort of hoping this is the final on the Laser. (Unless I think of something else to do to it....

If you do another version give me a call and I'll show you how to fix this.
So long, and thanks for all the fish
Top

Did you knew there is a nice Bump button in the bottom of the screen?

MrLoathsome wrote:If anybody tests this, I would like a bit of feedback regarding the way I enabled toggling the laser length hud
display on/off while in non-zoomed mode. (It always displays if zoom is on.)

It is just tweaking a boolean variable to toggle that hud variable currently, but it could do a whole lot more.
Maybe toggle the projectile for AltFire? Maybe fire a 3rd projectile? Toggle more stuff on the hud? etc.

Toggling the laser length HUD display in non-zoomed mode works fine as it is although, to be honest, I am not that sure knowing the laser length adds a great deal. Possibly you could tweak it so that toggling fired a 3rd projectile, say a pulsed burst with shorter (duration and/or length) bursts of more intense laser fire (x2 or x3 normal strength)?
Top

Since we are reporting stuff, when I play with it, the laser doesn't look straight, you can tell where the new line spawns and overlaps with the previous line... Does that make sense? I think you're doing it like the Pulse Gun alt fire which means it is not a single laser but a couple of lasers spawning after each other.
I forgot to take a screenshot but this picture may help get the point, the black spot being the gun and the red lines being the lasers. 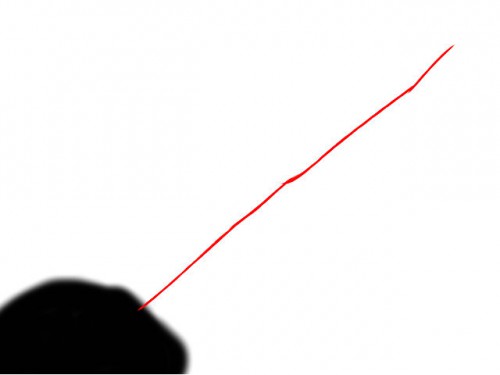 Well that length display was initially just a debugging thing, then I decided to add it to the Zoom mode hud.
Then I had the idea for the Fire+Altfire toggling deal, and that was a very convenient way to test it, as you
could see the result onscreen instantly.

Was thinking I would add the current ammo amount right next to the laser length variable, just for any who
play with no HUD and really miss that info being on the side of the gun.
Would probably also only display that stuff when zoom is on.
You could just barely tap altfire for minimum zoom, which is displayed at x1.0 (but thats a lie...

), and
play that way if you want to know the laser length and ammo count all the time.

Then I could use the Fire+Altfire toggle to do something else. (Probably a projectile of some sort.)

Had an idea today that might make a RC4 version of this happen.

Suppose if in team games this thing would fire Blue, Red, Green or Gold laser beams, depending upon the players/bots
team? Would anybody be interested in seeing that?

This would be fairly easy to add. Even with the 3 extra colored textures for all the effects, this would not effect performance of the
gun at all. All of it together would be less in file size than the horrible utx used for the ammocount deal on the side of the default plasma gun.

I think that eliminating that scripted texture crap, and replacing the 10 textures and all the SpriteAnimation junk the default plasma beam
has going on in the TICK function is what has enabled this thingy to run with laser beam lengths approaching 10,000uu's.

Replaced all of that with this:

As far as keeping things simple, that texture might be the best thing I have ever created.

The default UT pbolt class, (plasma beam alt fire), is indeed a series of little bolts all chained together.
Each one has a length of 81uu, and the max for the Plasmabeam is 9 or 10 of them. (Forget if there it is <=9 or <9 hardcoded there...)
With a LaserLength of 100 for this gun, you are getting a beam that is 8100uu in length. (Note the number will vary a bit if you are not shooting perfectly straight. No angles.)

I am hoping you were looking very, very close at it to notice this, and it is not a huge error I have failed to notice.

This, and the non-perfect attachment of the laser to the actors gun when in 3rd person view, are a bit tricky.
The source and target are both moving all the time....

Edit: I see no "Bump" button anywhere at any time.
blarg
Top

Perhaps I was, I am like that with details. Could it be worked out? Can we have a straight laser? I think it should be possible, though I have not done anything to the gun itself. Speaking of that, mostly of what I wanted to tweak was to make it more customizable, as I like doing, and part of that was the team colors, which sure are easy to add, so count me in when it comes to team colors. I was also thinking about adding back the scripted texture, however it affects performance, I think it looks better on the gun than that weird texture that I think is from another gun.
Top

Yes, having customisable/teams colours for the laser beam would be good. The gun's skin is predominantly red - the colour chosen presumably to match the beam colour - it might look just a little odd if it were firing a blue beam? Perhaps the colour of the skin could be customisable too?
Top

Well, I can take another look at the gun color option.
I did actually spend some time trying to make that an option, but it seems to work different for weapons than
it does for scriptedpawns. I had no luck. I bet if the laser shoots the right team color beam, that will be close enough for real gameplay.

If/when I figure out how to make that happen, it will be an option.

Re: The straight laser.

If you look close at the code for this or the UT Plasma Gun, all this stuff is happening in the Tick function in the beam, which is 2 classes.
The Checkbeam function in one class is called in the Tick in the other. Checkbeam spawns more copies of it's self, and then calls an UpdateBeam
function which then calls Checkbeam. I am still sort of surprised that the default UT Plasma Gun works at all.

Earlier attempts to make it work straighter than it does failed horribly. I think I made it a lot faster, but it will still break easily.
In the event that I think of a way to improve the performance in that regard, it will be in the next release.

Edit: I did a bunch more testing today, and never seen the laser not be straight....
On some occasions, if you are moving fast some segments might blink out briefly, but I blame that on the map and textures used.
blarg
Top

Well, could it be possible to use a single laser? I'm not sure why it has to be more than one but perhaps it is necessary.

How are you doing the laser color? With a texture? I have done the color thing a couple of times, in case you need help with that.
Top

Is that texture still available? Maybe I want to use it for the HealingGun.
I tried to download Loathsome's Laser from the URL <www.ecoop.tk> in first post but it looks like it does not exist any more.
"Multiple exclamation marks," he went on, shaking his head, "are a sure sign of a diseased mind." --Terry Pratchett
Top

Think a 2 year hiatus violates some kind of rule... but Barbie's the one who broke it, so I think i'm in the clear.

Much as I do like this weapon, it doesn't seem practical. It fires a continuous beam that has a range limit, but bots don't do well with that. Often it makes them run after whoever they're targeting without actually hitting them, at least until the bot does catch up to whoever they're shooting at. 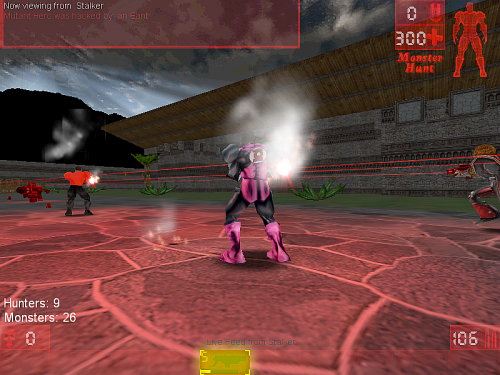