Initially I started the map without any concept. I only had the idea to connect two big rooms with huge Warp-Zone-Portals on the ceiling and using this squarish texture style.
So I created a test map and I was surprised! It worked!
After this I build two pillars in the center of each room to mark the middle and started to build everything around it.

Bit by bit the map was growing and I noticed that the polycount rose up to 1500 on some spots. So I needed some kind of ceiling constructions which are mirrored to each room to block the view.
I really liked the look and the map growth more and more to this result!

I had a lot of troubleshooting with the portals. Often one of both flickered as hell after rebuild or they caused extrem critical errors ingame by looking to a certain spot.


I also wanted to give this map some kind of special and unique touch, so I decided to visualize all weapon pickups as translucent bluish wireframe models which are floating and rotating in air.
For this I had to "Re-UV-Unwrap" all weapon pickup meshes because the UV-Layout from the original meshes were to stretched.

I made screenshots of all ammo pickups and created glowing sprites for each ammo pickup.
After the weapons and ammo were done and fitted well into the map I created my own Health, Armor and Amp icons to match the overall style.

I spent a lot of time and work into this map to get this result and I hope you guys will enjoy it and have a lot of fun playing it!

Here are the screenshots! 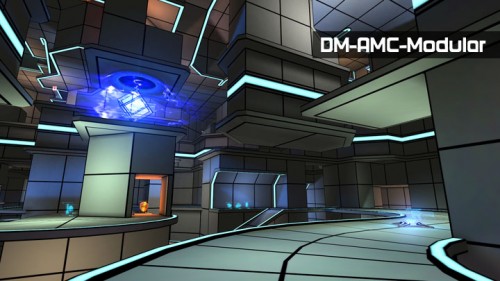 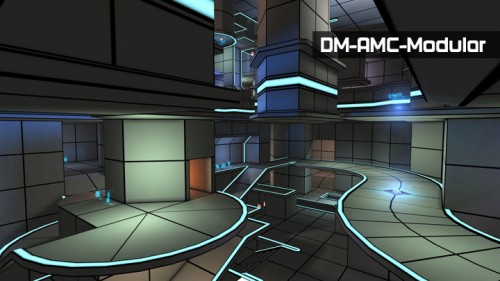 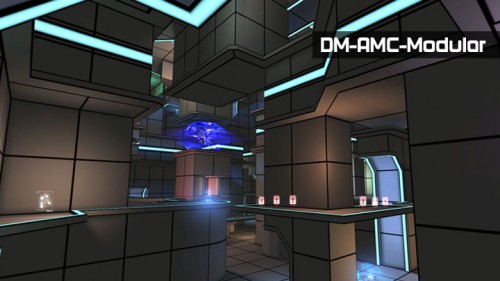 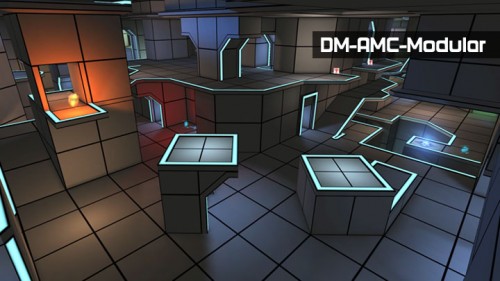 . The only big downside I could find is that map is very confusing due the generic, over-repetitive textures.
It is calming / soothing to eye, yet the contrast with the glass for example is confusing. I thought it were pits to die in or something, seems it has a thin layer of glass, after a few matches.
So mind-mapping this map is quite hard - but maybe it's me that lacks the sufficient DM skills.

How did you make those nice pickups float up and down, if I may ask?

Consider yourself already a winner, I doubt anything can beat this silky and smoothness.

Truly awesome map, yet the beauty also kills the gameplay a bit.
Top

Aren't you contradicting yourself there @Terraniux?

Interesting theme, quite well thought out actually. Love the pickups; too bad dropped weapons are still being rendered the old way. Good decision NOT to use any warpzones on even ground. Hitscan won't work through warp zones. Because of this, action was mostly focused on 2 floors. Playercount feels spot-on.

I do also have a few nitpicks, though

- Because of its theme and often barestripped detail, I was often lost of where I was or where to get health, ammo etc., mostly relying on luck
- Why do blue lamps emit red / orange / purple lighting?
- On classic, you can't get the shieldbelt from Brush145 because Jumpheight is only 48uu in classic. Also, both spots there are missing appropriate pathing
- Bots won't get the thighs unless being forced into the hallway. My guess is the tunnel being too narrow
- Bots can't get the redeemer, missing jumpspots / xloc spots
Most are pretty self explanatory but it is the first point that irks me the most. Since there is only one real texture in the map and the map often defines itself through shape, it's hard to know your way around in a firefight simply because you don't get a sense of place, an understanding of where you are. I'd say throw a few more shaped brushes and lights in there to make each section stand apart from the others.

All in all, good map. Feels a little more difficult to play than your average DM map I think. Probably best execution of the cell-shaded look since DOM-FoT-ShaderX. Not that I know of many other cellshaded themed UT maps, anyway.

Had to play this a few times to know exactly what to think about this map...
First off, yes, this is definitely a brilliant concept, and I fully expect a lot of "most awesome map ever" comments. And those comments would be justified to some extend, while not overall in my oppinion.
The major issue here is that if you focus the entire awesomeness of a map on one thing (the upside-down-portals), you better make sure that thing is truely awesome. And unfortunately, it's not. For multiple reasons:

First and most obvious, hitscan weapons like Shock, Sniper and Minigun don't penetrate WarpZones. Of course I know, that's always been the case, but it only becomes an evident problem in a map like this: The distences when looking at an enemy through the portals are damn huge, so in order to have any chance of hitting them, you would need working hitscan weapons. Firing rockets or Flak shells through the portals won't do anything, your target will never stay still long enough to hit it. Plus, it just breaks the immersion when some weapons just don't work "for no reason".
And since hitscan fire just performs a simple trace function which could in theory be mirrored to the other portal, I'm very sure that with enough scripting effort, this problem could have been solved. At least for the vanilla UT weapons that is. Making hitscan fire work for every custom weapon might be extremely difficult, if even possible. Still, for the four affected default weapons, this should have been done.

Second, the upside-down-portals are basically high-poly-decoration. There is - especially without working hitscan - no real reason to even try to use them. You can't really kill enemies through them, and besides the jump boots and maybe impact jumps, you have no way of getting though either. So besides trying to get a few free kills with the Redeemer once a minute, I really don't see a point in using the portals at all.

And third, the transition through the portals - if you decide to use them - is pretty ugly. I would have loved to see a smooth turning of the player's vision, instead of just flipping it around from one frame to the next. Sure, that would have also required a ton of scripting, but having good old 2006's "Prey" in mind, it would have been worth it.

Now aside those portals, what else can I say... The overall layout is fine, I just don't like all those corridors at the edges of the map too much. Plus, it's very confusing to find your way around, since everything looks the same given by the choice of style. As for the style itself, I kinda like it. It's hard to make a "no textures just lighting" map look good, but it works here. The translucent wireframe-weapons are a nice touch, though I don't like the fact that after picking them up, the 1st-person-model has its default skin again. Of course, I won't judge you for NOT going through the nightmare of reskinning those animated models... I would have been to lazy to do that as well for sure. But still, it feels inconstistent if you just look at it from an aesthetical point of view. I very much like the 2D-sprites for pickups though, but there's one easy-to-fix flaw here: The ShieldBelt icon says "+100", while providing 150 armor.

Now, reading my post again, I feel it might sound too negative... It shouldn't. Overall this is still a damn cool map with a truely unique approach both in style and in gameplay. All I'm saying is that you should heavily consider to release a "version 2" some day, and invest probably a lot of time into scripting, in order to turn this "cool map" into the masterpiece it could very well be.

Thanks a lot for your feedback guys!

Now I’m asking my self why the hell didn’t I noticed that the shield has 150 charge!

I’m actually absolutely pissed because of this mistake! God damned!

I’m going to fix the .u file with the new shield icon tomorrow! I’m sorry for that

@Rev: 5 paragraphs of complaints then you say

Most of your feedback is engine related and beyond Krullor's control. You really would reply as a criticism that he fix a 20 year old engine so his map works the way you think it should? That's really unfair.
So long, and thanks for all the fish
Top

I attached them all to some loopmovers which are placed out of the map.
I also delayed the movement start with a dispatcher to generate the illusion of a wave.

players would do the same.

And I don’t know if anyone plays UT on classic. But in this case bots can reach the shield with the jumpboots

I wanted to give the players the chance to play this map with weapon- and item mutators so I used the stock weapons and pickups. If I had created a new actor class it would be more fatal because the mutator compatibility would be non existence anymore.

So I had to live with that the weapon drops in its original skin.

And portals are known engine limitations

During playtesting the map I noticed that the player has no time to watch the ceiling for some free extra frags.

I also added triggerlights to each powerup and synced them to the respawn times to give some cool visual feedback instead of a static light.

The cube in the center are assert movers which are rotated 10 times between keyframe 1 and 0 with a long movetime.
If the assertmover reaches keyframe 0 it returns instantly back to 1 and get retriggered.

Usually I use phys_rotating for that but this method had replication issues as client. One half of the cube rotated way faster then the other one.
Top

I wanted to give the players the chance to play this map with weapon- and item mutators so I used the stock weapons and pickups. If I had created a new actor class it would be more fatal because the mutator compatibility would be non existence anymore.

So I had to live with that the weapon drops in its original skin.

And portals are known engine limitations

During playtesting the map I noticed that the player has no time to watch the ceiling for some free extra frags.

Fair point, didn't think about custom weapon mutators there.
As for the portals, I wrote some stuff in the AMC main thread.
Top

This looks very UT4 inspired actually, so with HD skins or custom models and Nali Gore, Youtube vids could cause as much confusion as the Nali Weapons vids did, with people thinking it was for UT2004.
Very slick and polished looking.

In my opinion the best one of the contest!
I like the idea and the flow is awesome!

Thanks, loaded it up on cut99 server!

iSenSe wrote:In my opinion the best one of the contest!
I like the idea and the flow is awesome!

Thanks, loaded it up on cut99 server!

Thank you very much

Thank you very much! I'm glad you like the map. I also enjoyed creating it

I attached two more screenshots of the Unreal 227 version of this map.
Distance fog, particle emitters and dynamic coronas has been added.

I changed all Icons to Unreal style and the Unreal weapons have the translucent wireframe mesh too. 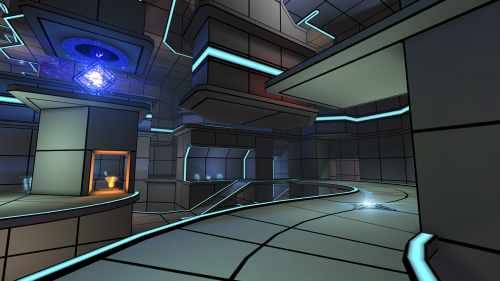 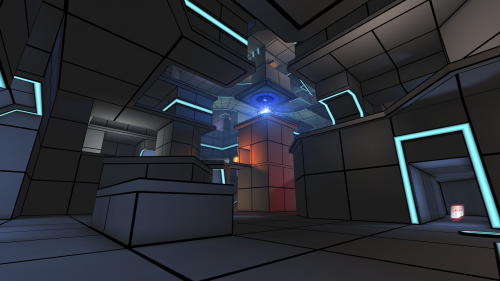