Quick update: very busy week on my end, and I just got flu yesterday to top it off (which is when I started my holidays), and although I was able to advance a bit with this map, I won't make it in time for the pack release, as this flu is making me a lot slower and I get tired a lot sooner, so it's not been very productive.

So I won't really release this for AMC, but I will still try to release as standalone map before the end of the year.
I will change the title to reflect this once I got a proper update to give on the map progress.

Update: since it's no longer going to be an AMC entry or bonus content (due to time and was sick), I just removed the "AMC" part of the name.
Today I made some more progress, namely in figuring out the basic layout I wanted to have for the bases themselves, and I also changed the texture of the paths to a better one.

I was only able to finish the "bare" layout for the bases (gameplay), therefore what I am going to work on next is in actually adding all sorts of detail and eye candy to the base: trimming, lighting, structures, decoration, etc, in which I expect to spend a lot of time on, so it looks good enough. It's going to be quite fun.

I have a rough idea where I am going from here, but I had to experiment around with all sorts of shapes first, even to figure out the kind of gameplay I wanted.

In the screenshot I added some vehicles as a "proof of concept", and although a version of the map will really have them (also as a proof of concept), as a map it's also suitable to be played without vehicles whatsoever, thus I will just add some extra crates or something in their place.
It also looks like the sort of map which could be played with SLV or Rocket-X though. 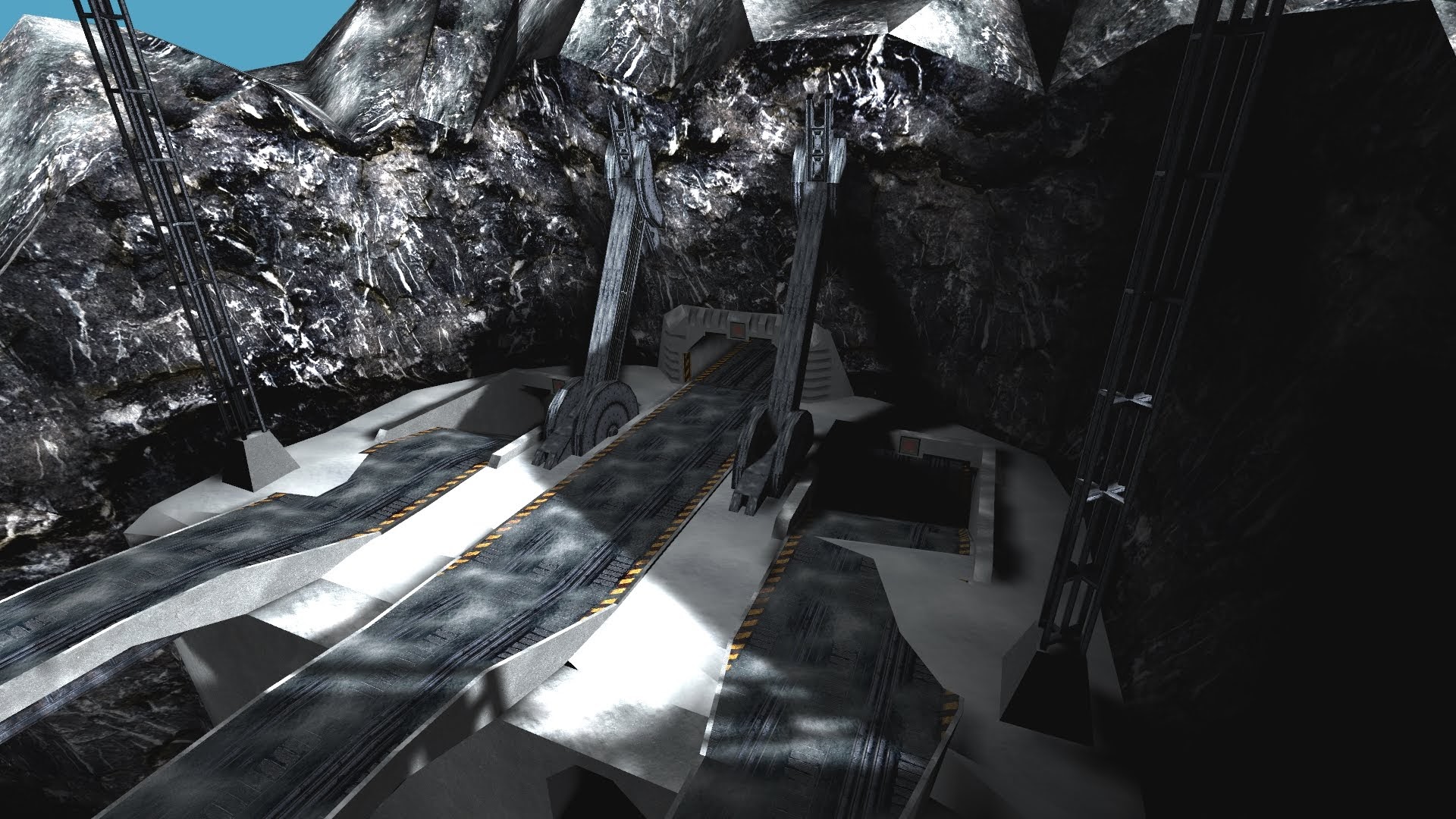 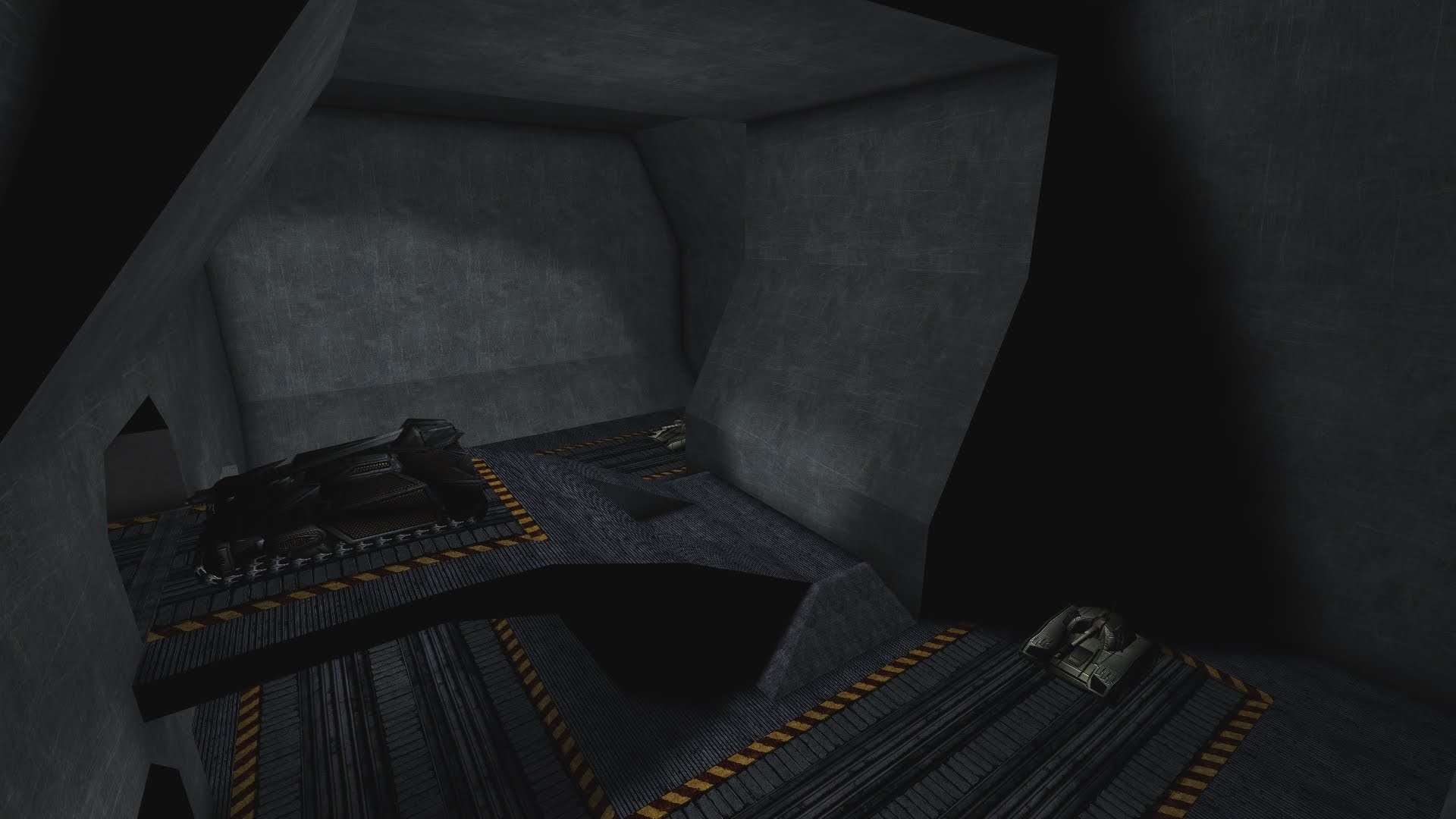 I noticed on the first picture a little sneaking entrance.

From the start I meant for there to be also passages under the bridges, with 2 bridges of their own, and is also where the redeemer will be, for players only (no vehicles).
However, in the meanwhile I moved them lower (they were too close to the surface as you can see).


papercoffee wrote: I delay the gathering of the contest maps till after Christmas Eve ...because I didn't expect to celebrate X-mas myself. But I got invited by a good friend.

Although if you also mean that I have a bit more time to include this into the AMC pack as bonus content, what I ask you is to not really wait up for it, I don't want my map to delay the release of the pack.
If I end up finishing this before you actually make the pack, I will still add it as bonus content, but otherwise, please don't wait up for me.

Still far from bot pathing, since I didn't even finish the BSP part yet (working on the bases themselves right now, and there's still some stuff outside missing as well, especially in the middle).
But it will be a very straightforward and simple bot pathing, since like I mentioned before, there's really no tricky pathways or lifts or any of that stuff (at most some jump spots here and there).

papercoffee wrote: I delay the gathering of the contest maps till after Christmas Eve ...because I didn't expect to celebrate X-mas myself. But I got invited by a good friend.

Although if you also mean that I have a bit more time to include this into the AMC pack as bonus content, what I ask you is to not really wait up for it, I don't want my map to delay the release of the pack.
If I end up finishing this before you actually make the pack, I will still add it as bonus content, but otherwise, please don't wait up for me.

Now is the Day of the Gathering ....of maps

If you can't deliver today, that would be a bummer. But I'm certain your map will be awesome on its own.

Another update: still working on the bases, but haven't worked on the map itself that much lately, but it's coming along, and spent a lot of time just trying out different structures and textures and such until I got something I liked.
There's no proper lighting yet, it's all placeholder lighting just to be able to see the layout, so it will better once I do the lighting properly of course.

I am starting to worry of having more polys in view inside the bases than outside at certain spots, and I didn't even add all the details, trimming and whatnot I want to add, so I will probably have to cut down on the details I wanted to add and just focus mostly on the major ones. 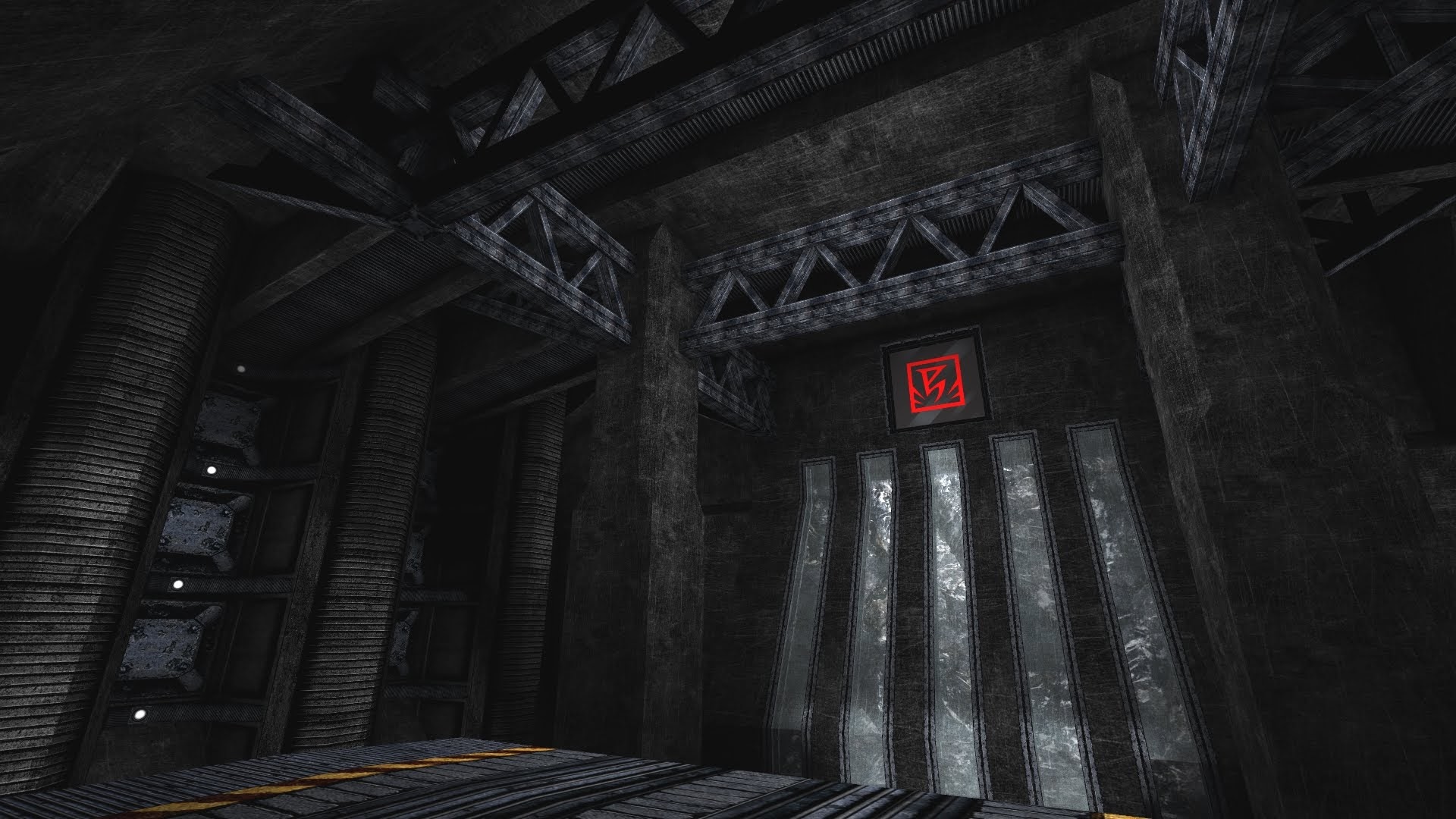 My advice... some of the details can be meshes

you know how to make them "look" good.

What is the exact polycounts you're worrying about? Anything in between 400 - 800 should be fine nowadays, even if it dips up to 1500 in places.
Reminiscence - My map collection
Top

This map looks amazing. Will be adding it to my server when its released

Swanky wrote:What is the exact polycounts you're worrying about? Anything in between 400 - 800 should be fine nowadays, even if it dips up to 1500 in places.

It's already around 400-800, peaking at 1100 in very specific spots.
My worry is that although I may have some leeway, things like trims and lights generally have to be solid CSG-wise, and this generally leads to a multiplication of the number of polys (especially when you add lights in the middle of a wall).

Furthermore, I will have things like glows and a few particle emitters, so I have to account for those, as well as the action itself to not have the gameplay devolve into a lag fest.
The central columns that I have added helped a bit though, occluding a fair number of polys that would otherwise be visible.

papercoffee wrote:My advice... some of the details can be meshes

you know how to make them "look" good.

Yes, if this was a more serious map for something like a single player campaign or to be genuinely added to a server to be actually played, I would do that in some places, but I don't really intend to, even because it would take more time to do the meshes and such than the BSP, and once I started with some, I know I would end up creating a lot of them and such, and I don't want to have that work.
Also, I want the whole map to have detail texturing, which only works with BSP.


UPDATE: Also, here's another little update.
I added some necessary trimming already, and started the actual lighting and such that I want to have in the end, but it's still far from finished: there's still some missing details, layout, lights, etc, this area is still missing a fair amount of stuff and it won't be this dark (this is just early lighting).
But I won't be adding that much stuff, to not have a big performance hit. 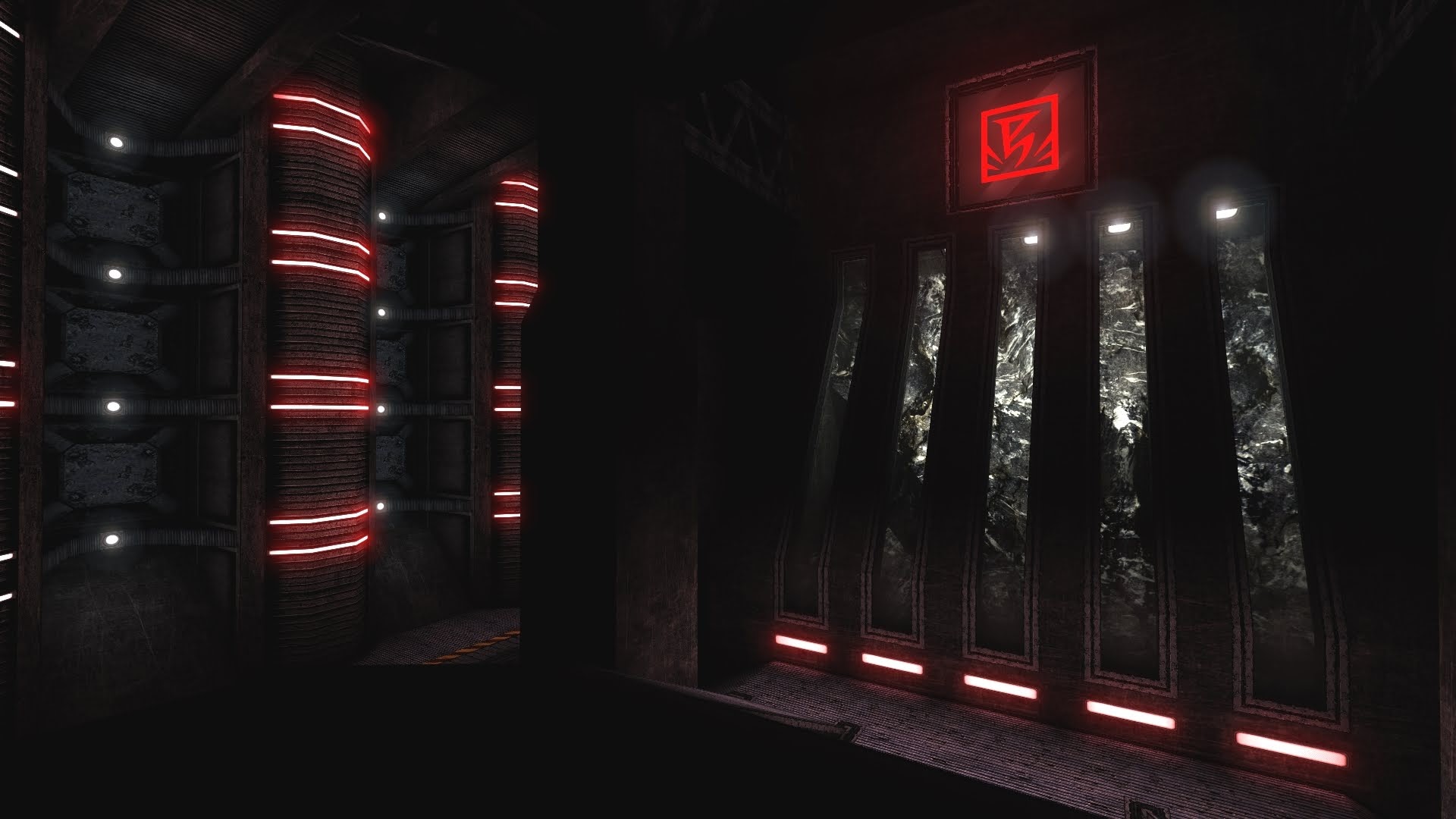 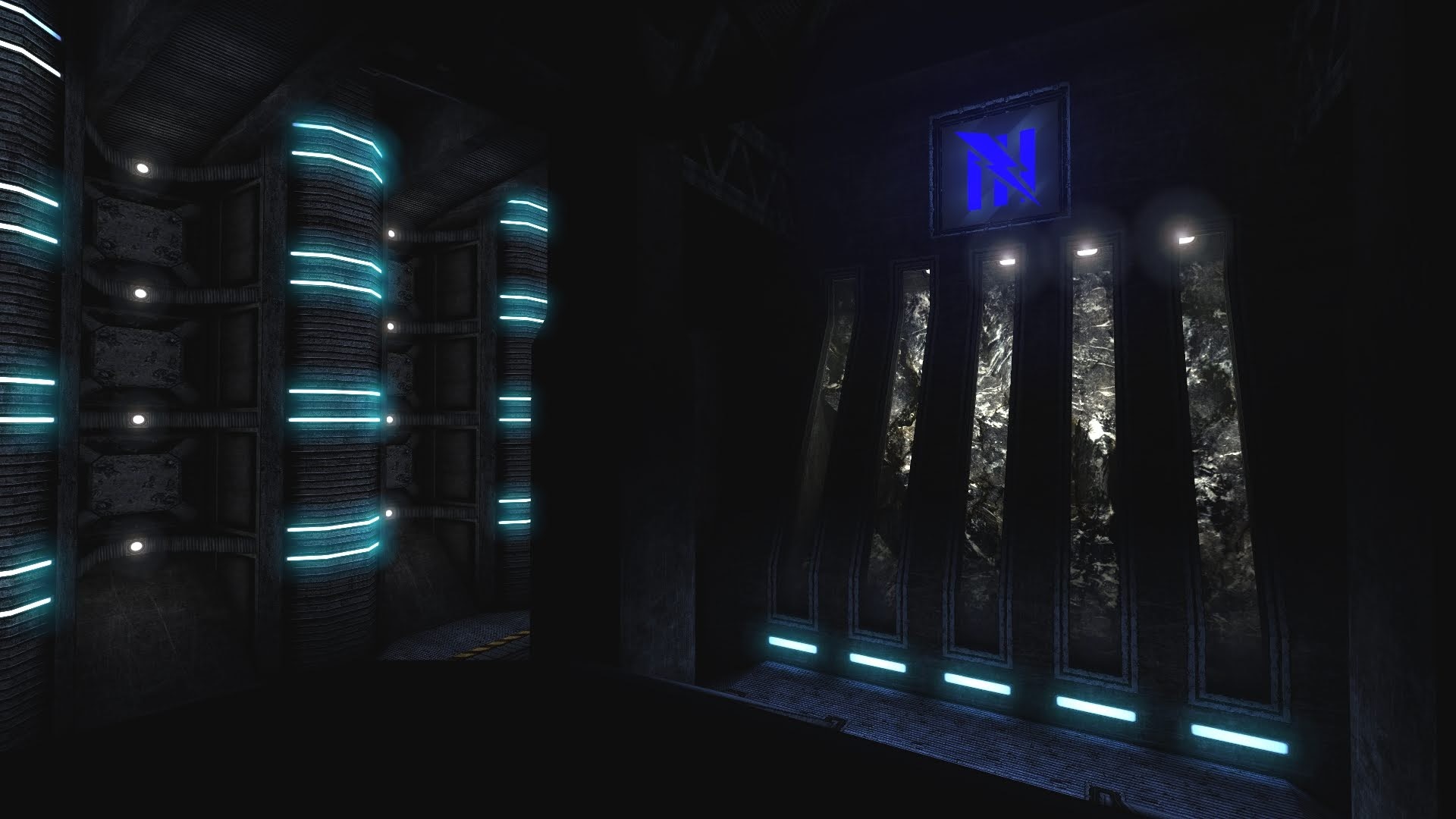 WOW this looks amazing!!!! Can't wait to play it!! Thanks for the updates
Top

In the previous shots I was thinking: "interesting, pretty cool". Now, with lighting I think: "Incredible"!
I wouldn't care for framerate issues if you are below 1000, anyway, and if the view is deserving of that many polygons. I mean, even the internet demands quite capable computers nowadays. If they can handle bloated websites, they should handle higher-poly UT maps as well.