In terms of playability, please set your expectations as low as possible, because this map is becoming more of a mini tech demo than a map meant for online play.

Don't take me wrong, the map has a good performance (thus far), and will be playable online, but it's also the map I am putting most work on ever when it comes to adding some detail and texturing, and pushing my own old effects package to the extreme to see how much it can handle (that whole bloom that you see), and as a result the map is getting very very big and complex, at around 34MB right now, with almost 3000 brushes (most of them merged already into more elaborated shapes), and it will get bigger, since I still have the corridors and outdoors to worry about (although not as much as the bases).

Having that said, I have some good and bad news:

Good news: Although I am pretty much at 50k nodes, which would generally mean that I have to compromise the detail on the rest of the map, that's by using the "Rebuild BSP" button, however if I do a "Rebuild All" with the default build settings, it optimizes the map down to around 34k nodes, with seemingly no BSP issues that I have seen (if there are, they didn't really pop) and slightly better performance it seemed to me, meaning that I still have some margin to finish the map like I want it to.

Bad news: While I was in the process of finishing the back part of the bases yesterday, it started to crash the renderer (namely the OpenGL one from Chris everyone uses).
I tracked the problem down to what seems to be the number of lights within the same area, although I had no idea that the number of static lights would cause any issues other than longer build times (if anyone would like to shed some light on this matter, please do so, I would like to know if this limit is really a thing).

But I have a plan I will start with today, which is to optimize and cut down on the number of lights, and by my rough calculations I may be able to remove at least around 200 lights from each base, by making adjacent light sources using a single higher radius light.
Fortunately I have the lights divided by groups, so I can check and evaluate each group one by one more easily, but, although probably in the end the map will still look very similarly to what I have been shown, this may mean that the map may no longer look exactly the same, lighting-wise, since this will effectively lower the resolution a bit relative what I aimed for.

Feralidragon wrote:I tracked the problem down to what seems to be the number of lights within the same area, although I had no idea that the number of static lights would cause any issues

I know that UnrealEd as well as UnrealTournnament can crash if there are lights with a huge radius.
"Multiple exclamation marks," he went on, shaking his head, "are a sure sign of a diseased mind." --Terry Pratchett
Top

Not my case, other than the outdoor lights, which seem to be fine.

Also, generally crashes are randomly triggered by dynamic lights with high brightness, which are more likely the higher the radius, that's why I limited the lighting from my mods to a brightness of around 160, which seemed to be a safe value, but as for static lights which generate the actual lightmaps... there's just no reason to crash in the editor at least, afaik, so I wasn't really expecting this to happen.

It's mostly lights with high radius. The editor just doesn't like it, especially when they're either dynamic or you start moving them around. CTF-FoT-Tarjas has around 2660 lights, so you should be fine. One thing that may or may not help with outdoor lighting is the use of spotlights with a high radius. They're illuminating less surfaces at the same time so it *might* cause less troubles.
Reminiscence - My map collection
My Moddb profile
Top

Well, as for updates, I don't really have any worthwhile I'm afraid.

I paused the development of this map temporarily a few days after back then, because I was honestly getting tired of it and running out of ideas on how to work in the other areas, so I decided to do something else (UT-unrelated, involves Fortnite and an erupting volcano) and once I am done with that, I will get back to this map and finish it, which hopefully should be somewhere around April or May.

As for the lighting crash issue though, I did solve it back then as well, a couple days later after some more serious debugging: it was not exactly lights with big radius, it was just that 4 lights were conflicting with each other in some weird way in the base corners near the main base entrances.
After removing 3 of them, the lighting stayed almost the same in that area, and had no problems since.

I can at most show how the entrances ended up looking like after this fix if you wish, but it won't be anything much different from my previous screenshots.

Still didn't manage the time to work on this, but might to soon.

Started working on this map again.
No ETA though, it will be ready when's ready, although it's around at 60% right now.

Also, the map already sits at 42MB, so if I manage to finish it, it will end up more like a tech demo than an actual playable map. 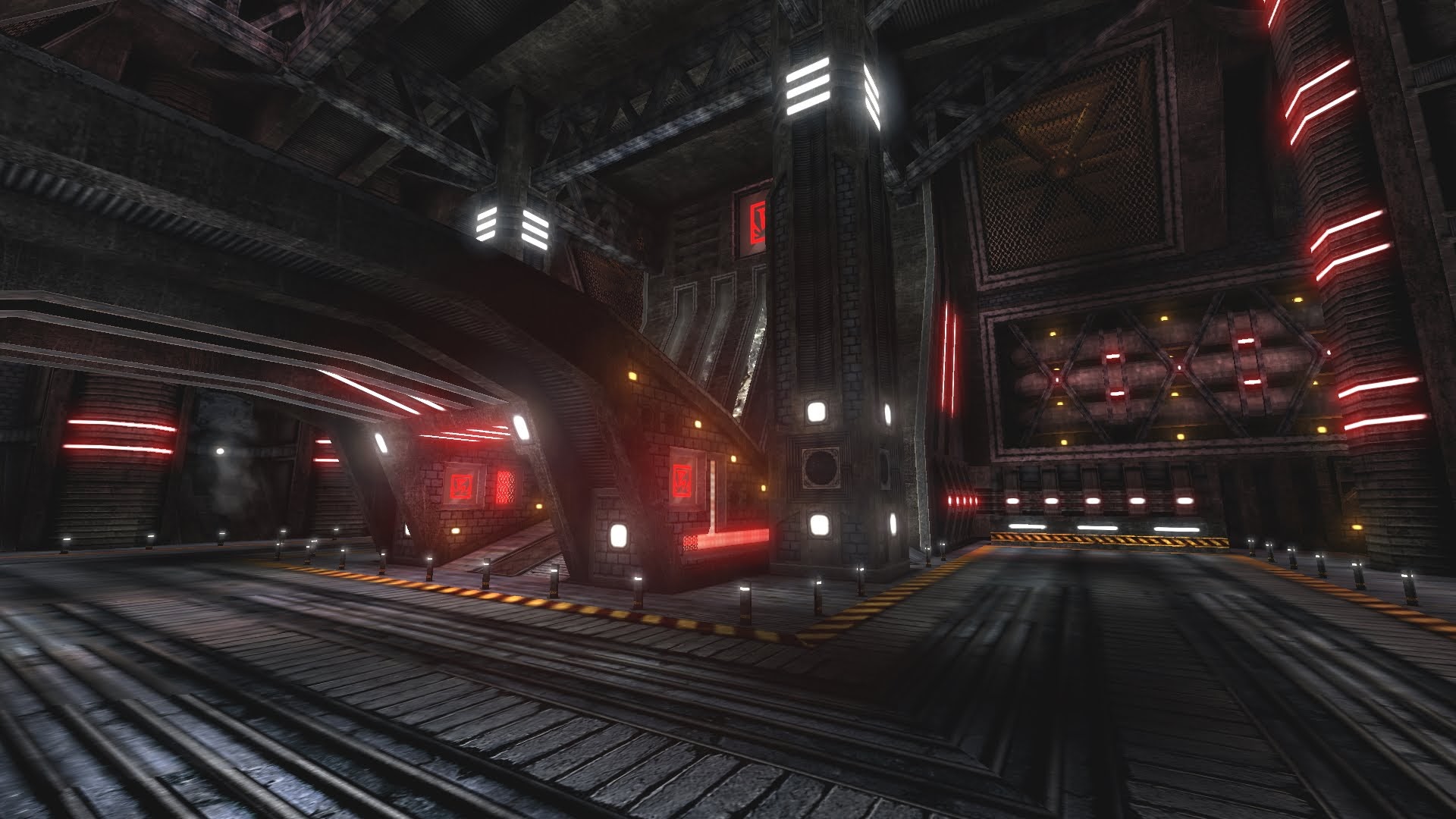 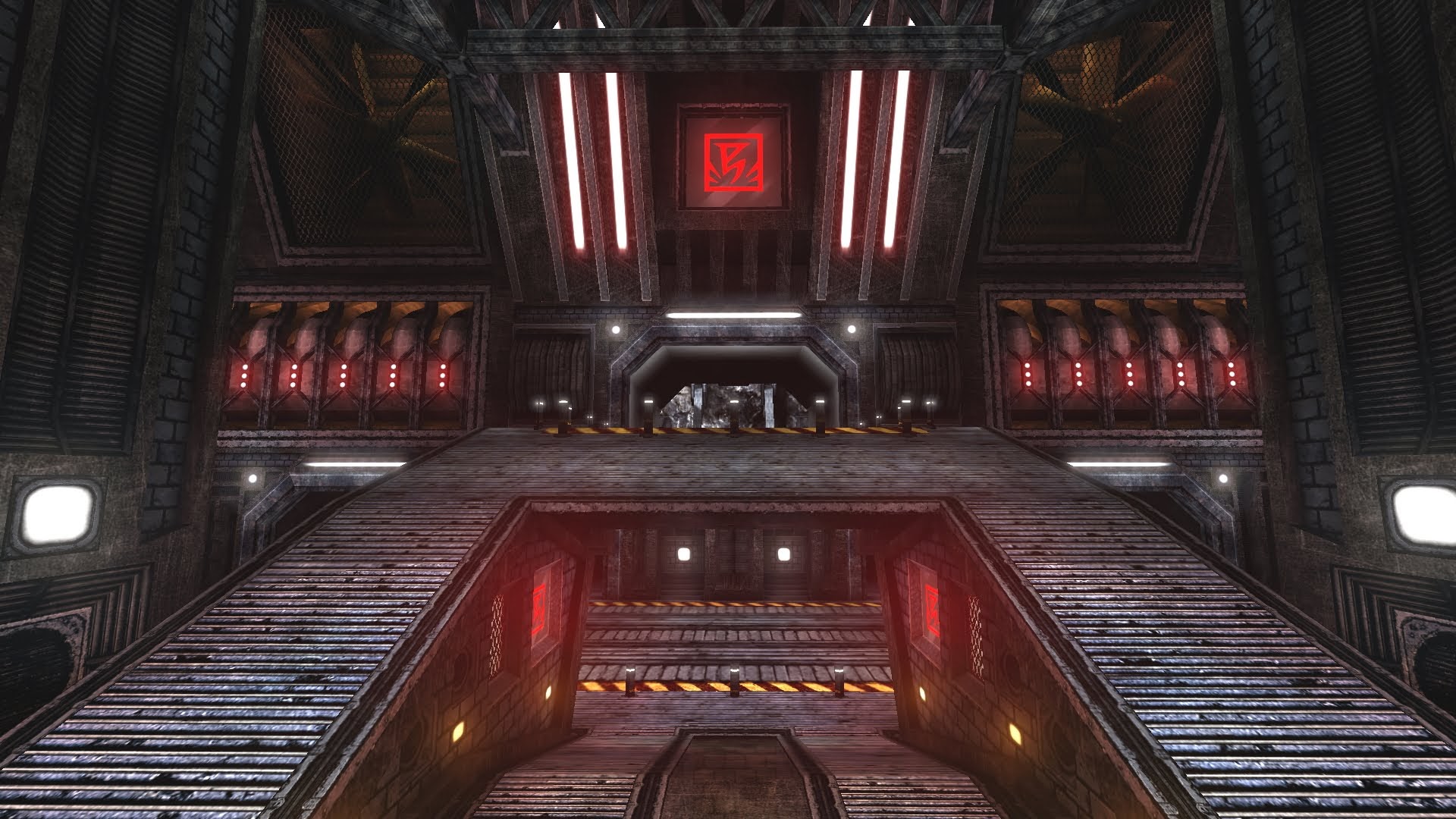 Is everything made of BSP or also meshes?
-=: http://jokercologne.deviantart.com/ :=-

Looks pretty much BSP to me.
Reminiscence - My map collection
My Moddb profile
Top

It's pretty much 99% BSP.
The only meshes in those 2 shots are the fans near the ceiling, and a couple of red glowing stuff inside the ramps.