A map I am currently working on together with some other mappers seems to crash after a while during online play with an error similar to this: 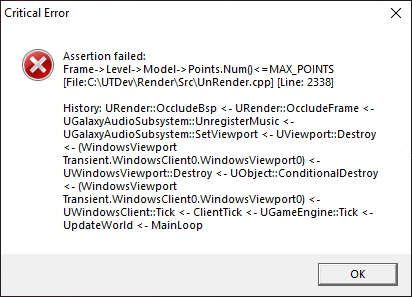 I get I am hitting an UT-limit, which is 128000 points, but what exactly are points? Are these the vertices of brushes? Are this the vertices of the models of meshes? Something else?

I have seen this error before a couple of times on other maps, and it almost always seems to follow the same kind of pattern:
- The error is not reproducable offline or on LAN, or at least it is very unlikely
- The map be played fine online for a while, sometimes even for several minutes up to an hour, but at some point everyone will crash with a MAX_POINTS error, and you are no longer able to join the server without crashing. The server will have to be restarted to fix it.
- The number of people in the server may be related, at least, in my experience.

This is the first time it is happening on a map I am working on myself, however, so I don't really know where to start looking for a solution. It is probably someting dynamic or something that builds up over time. The map is pretty big (nearly at the node limit) so I know I'll probably have to simplify/reduce/remove some stuff, but I want to be working on the right thing so I won't remove stuff that was not necessary.

Could anyone point me in the right direction or give me some ideas what could be causing this error?
Top

Look around for complex shape, or one huge brush, something like that.
Binary Space Partitioning
Top

You're gonna have to do a LOT of brush optimization and rebuilding.

Thanks for the input. I figured that would be the case, and I do still see some room for optimization, so I guess I'll have to put some effort into it now. But I just wanted to be sure that I do not spend a lot of time working on the brushwork whereas the solution would have been to remove a couple of meshes.

I am a bit curious though, what causes this error to trigger? It doesn't seem to happen offline, so it is probably something related to online play. In my mind brushes are something static, or at least static in shape if we factor in movers. It seems a bit strange to me that somehow something changes about the brushes over time what causes the crash. Is it caused by movers? A rogue brush? I probably have the wrong picture in my head though...
Top

I think it would crash offline givin the right load is going on, try adding 20 bots see what happens.
Binary Space Partitioning
Top

Meshes have absolutely nothing to do with this.
This is a combo of overly complex bsp + movers.

You'll have to make the map a bit more 'seamless'.