Tutorials and discussions about Mapping - Introduce your own ones!
Post Reply
37 posts

Your map looks good, will you release a final version?
Some small tunnels are too dark for my taste, I can't see my way there, also my monitor isn't the best concerning brightness.

EDIT: Played this map now with less sun coming into my flat, then it's fairly good playable...
If you jump from one of the dark tunnels on top of the first stone rocks the textures of this rock disappears, perhaps it is fixable.
Last edited by Aldebaran on Fri Aug 23, 2019 5:49 pm, edited 3 times in total.
Top

This reminds me of some parts of the Hong Kong/canal streets map in Deus Ex. Looks good.
Top

Coronas need some scaling in some spots
The map overall is a bit bland, and needs some spice.
Item and weapon placement seems to be pretty random.

I would spice things up by adding some dynamic things, such as lifts, or moving parts of some sort that interact with the game play adding to tactics. You can time things so players have to interact with that instead of just running around shooting.

You can also use item and weapon placement for that or combine the two, placing powerful items in difficult spots, or exactly the opposite to create a hot spot of action, with little to none health items forcing tactics. Trick is to balance this out to make it interesting where you basically divide the players up in groups forcing tactics instead of just running around with the nearest gun you find..

example is the 'guns high, health low' rule (which i just made up

) where you place the weapons on higher levels and the health on lower levels, making seeking for health risky but necessary, forcing tactics, because the player on the higher level is 'guarding' the weapons dominating the lower player which is not dying of because he is regenerating health. You understand that by placing one weapon in the lower levels it will engage game play..

finding that sweet spot is probably setting great maps apart from average maps, and where you will put the most work in creating a map imo.

Aldebaran wrote: ↑
Thu Aug 22, 2019 11:50 am
If you jump from one of the dark tunnels on top of the first stone rocks the textures of this rock disappears, perhaps it is fixable.

I believe I've fixed this in the final version, attached below. Thanks for the feedback

I take that as high praise, thank you!

Good points all around. Regarding the coronas, I believe I did do a scaling pass for this final version. As for adding more rooms and dynamic elements, I think that'll be a goal for a potential future map (Which I have some ideas for). I spent quite a lot of time on this map already

With regards to balancing, again, those are definitely fair points especially if you consider standard UT99. However my goal when I set out to make the map was to make something that was fun to play with Infiltration 2.75 in DM, which I think I did. The time to kill with that mod is quite fast, and movement speed a bit slower, so I think balancing the weapon placement differently would make that less fun.

However, I've also included a Domination version of the map, which may be more to your liking. It's included in the attached file, as well.

Either way, thanks for the feedback!

Damn! I'll fix it and upload with a correct readme here, but I unfortunately already submitted to unreal archive

Thanks for downloading and pointing it out though.
DM-FreewayTunnel
DM-INF-CQBTrainingCompound
Top

If you submit it again; I'll make sure it's updated properly.
ShrimpWorks
Unreal Archive - preserving over 20 years of user-created content for the Unreal series!
Top

I liked the BETA3, will have to try the final version after I get off work.

If you submit it again; I'll make sure it's updated properly.

I resubmitted it, thanks for your help!

Also, would it be OK if I resubmit it as just a DM/DOM version also, so it doesn't get categorized as a mappack? Or would you rather not have duplicates like that?

Please do! It's appreciated

If you want to package and submit the files separately, as a separate DM and DOM, that's cool

well here's a little tidbit - not sure if you know this:

I noticed in your DM map level properties you did not set the gametype to DM. It is blank. That's okay, actually UT will then use the file name to determine the gametype. That is if it starts with "dm" it will load as a deathmatch.

Now there were some maps in the past (i'm not sure about product maps) example: DM-MementoMori (not sure if I spelled that right) where the mapper has placed DOM points. So, if you copy and then rename the DM file to
DOM-MementoMori then load it in UT it will play as a DOM. This makes the map "dual purpose". So you really only need one map, unless there are design changes or differences between DM and DOM. UT just ignores the DOM
points in DM mode (they will be hidden) and are just threated like pathnodes (or some such thing). This probably works with CTF as well. I would bet the flags and team properties are ignored.

Anyways, you could do this all in one map and just mention the dual purpose in the readme file... 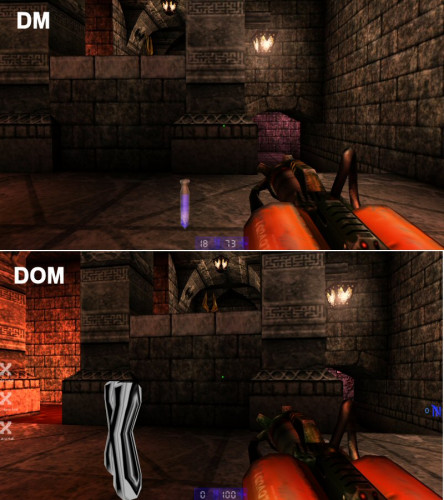 FraGnBraG wrote: ↑
Sun Sep 29, 2019 3:47 am
This probably works with CTF as well. I would bet the flags and team properties are ignored.

Yes, if the CTF prefix of a CTF map is changed to a DM prefix, then the flags don't appear and the map can be played as a DM map.
Top

FraGnBraG wrote: ↑
Sun Sep 29, 2019 3:47 am
DM-MementoMori (not sure if I spelled that right) where the mapper has placed DOM points. So, if you copy and then rename the DM file to DOM-MementoMori then load it in UT it will play as a DOM.

Have you tried that? Because I took an Assault map (AS-Canyon.unr), removed LevelInfo.DefaultGametype and started that: it runs as a deathmatch map now. So the file name seems not relevant - of course the usage of map vote or other mutators may change that.
"Multiple exclamation marks," he went on, shaking his head, "are a sure sign of a diseased mind." --Terry Pratchett
Top
Post Reply
37 posts