Discussions about Coding and Scripting
8 posts • Page 1 of 1

So they operate in next way:
1. Try follow for human. If not able to do this - translocate to him via Coop Translocator.
2. Help kill monsters, near human.
3. If human killed, report "I am position" and wait some time for human tele back to it and collect weapons.
4. If it killed, then collect weapons at respawn and tele back again to human.

What do you think about this idea?
Top

I'm mostly confused by this.

Realistically if you wanted a translocator so badly you could just edit one onto any given map.

I typically play MH with anywhere between 6 to 8 bots on my team, so there's already at least 2 of them backing me at all times. 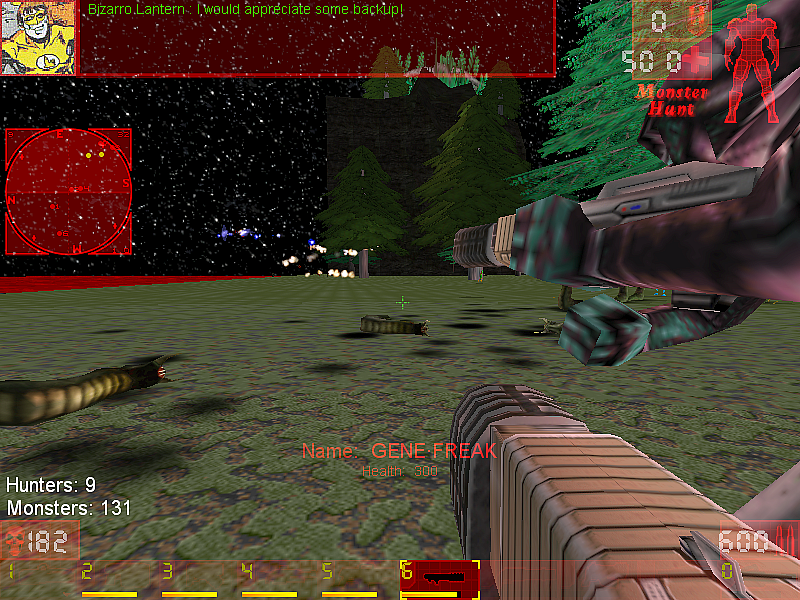 UT does that automatically with that much backup, although I can choose to change which bots back me from the command menu. As to ending the map, most bots can't do that because most MH maps (ones I play at any rate) have a boss that even a bot with a redeemer couldn't kill that easily.
Spoiler
Show 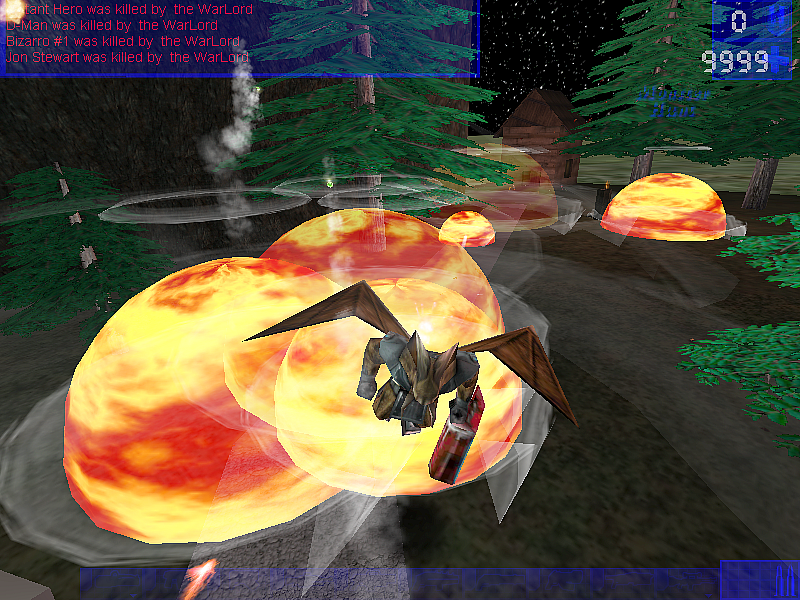 Buggie wrote: ↑
Mon Jul 06, 2020 10:00 pm
So they operate in next way:
1. Try follow for human. If not able to do this - translocate to him via Coop Translocator.
2. Help kill monsters, near human.
3. If human killed, report "I am position" and wait some time for human tele back to it and collect weapons.
4. If it killed, then collect weapons at respawn and tele back again to human.

My bots do this stuff, and other than my custom configuring of them I'm not using a bot mutator to make them so different, so most bots would do this too.

I don't know what a "coop translocator" is but it sounds like it would teleport a bot to me from anywhere on a map... which seems a tad unfair. As soon as I respawn whatever bots are backing me up tend to run over and find me. They need the exercise so that's okay.

Typically I use the pinata mutator so whatever bot was near me when I died would already have gotten all the weapons I dropped... although they never give them back to me; selfish bastards!
http://unreal-games.livejournal.com/

Sounds interesting - I don't know what a coop translocator is but, like EG, I assume it will translocate bots (or whoever has it) to the furthest human in the map.

Would your idea work on maps with poor or no botpathing? Does it require bots with new code or would it be implemented by some other method?

It would stop bots getting too far ahead of human players and completing objectives or ending the map by themselves (in those cases where that might be done fairly easily and quickly). It could be useful in those maps that don't have respawning areas other than at the start. Plus, I suppose, it would reduce both the time needed to play a large or long map and the need to keep giving orders to bots (to stop bots racing ahead in those instances where a player is killed on a map with a considerable distance between a respawn location and the place where the player was killed).

Just to clarify, I only play monster hunt off-line and so my comments relate solely to that mode of playing (and so to having only one human in the map),
Top

Barbie has this kind of Transloc on the server ...you select it and see your allie's names through walls. with alt fire you select the team member and with fire you teleport to his place. Mostly you land on his head.
It's pretty handy on very large maps which lack unlockable respawn areas.
-=: http://jokercologne.deviantart.com/ :=-

Yes, our CMH Server has this kind of Coop Transloc on it also.
You have you choice of a regular transloc or the Coop transloc, depending on the need and situation.
Not sure who added it into MH, mars007?

Very handy indeed though.
It Makes a lot of MH maps a lot more enjoyable to play!

If you not know what is this some stuff maybe need ask that before give some advice which can be irrelevant at all.

papercoffee wrote: ↑
Tue Jul 07, 2020 1:35 am
Barbie has this kind of Transloc on the server ...you select it and see your allie's names through walls. with alt fire you select the team member and with fire you teleport to his place. Mostly you land on his head.
It's pretty handy on very large maps which lack unlockable respawn areas.

I though anyone know this stuff. Ok, my mistake.

Maybe later publish mutator with improved version of this weapon.

Coop Translocator allow anyone join to teammate to hunt in any place. Do not see any unfair on this.
Very useful thing on large maps for do not run most time after die or enter to server.

Usual UT bots usually:
1. Stuck at start position.
2. Try collect ammo or health which is pointless because its regenerate over time.
3. Can not follow human on mostly maps.
4. Require bot pathing which unexist for most maps.
5. Try collect anything which placed near. Like collect your weapons if you die near, which not suitable for MH.
6. If they support you and you die, then they run to you to your respawn, which not suitable for MH.
7. Love jump into lava, run in closed door and other dump stuff because they blindly follow bot pathing and think it is true and proper way.

So they absolutely unuseful at MH in most cases.

New bots it is pure idea currently. I am not dig deeply, but I think they can be build on top over existing implementation.
For first attempt only few states, like Die, Respawn, Follow, Support, Wait and so on.
Some pieces of code can be used from UT bots. Some need add.

Of course they must work without bot pathing.

Strictly speaking first version can be annoying which their "support". Run in front of you and bring a lot of monsters to you, then die.
But I hope it is solvable problems.


OjitroC wrote: ↑
Mon Jul 06, 2020 11:23 pm
where a player is killed on a map with a considerable distance between a respawn location and the place where the player was killed

You just use Coop Transloacotar and you in battle again. of course if die whole team then need run again to last point.

Mostly idea inspired by Barbie server.
All thing which I describe mostly used by humans.
1. Respawn.
2. Collect weapons.
3. Run to desired location or tele to other players.
4. Kill monsters.
5. Say "I am position" and wait for tele if teammate killed.

And so on.
Of course not all players do all of these. But most "brained" players operate in this or similar way.

Bots cannot understand map, but other things they can do.
I think it will be some fun play with few bots, rather then try play alone huge map.

Currently Barbie server come with implementation blindly included from other MH pack. It contains a lot of bugs, but can be fixed in time.
Top

I see where you are going with this. (To EG no it's not map dependent, it is a mod dependency!)

While the coop transloc doesn't have any code support for the bot, it can be added by anyone who know how to program the bot to teleport to players using the coop transloc.
In this, you would want a throughout design to be sure. I can start off a few idea.

Collecting weapons - if the inventory is low well this should be customized by server side setting because each server have a different set up. some starts off fully loaded, some does not.
If the inventory is less than 40 ammo and/or the weapon is below 35% of being able to be used it can get more ammo to be prepared.

Following player - sometimes some player can do a lot like bunnytrack while bots doesn't follow the same order of movement of what you've done. If anyone interested to code this stuff well they can pull off the awesome trick. Otherwise they can risk falling into a lava just for trying to move straight forward and deal with the respawn-tele2player. Or if they detect the falling physic, bot should be quick enough to translocate to player.

This can also allow the bot to go grab ammo and immediately teleport to player once the inventory is filled well.

Closed doors - if the bot is nearby a detected mover within the UU range, it can decide to transloc to a player after the player moved away after so many UU.

And again all of these require scripting by adding new bot support into the transloc or it can be made a new mod for bot support for separate reason in case a player cannot use the bot supported ones.

I'm all in for this but I have 0 skill about coding for the bot. I doubt Higor will take into this even though he is one of the pro-bot guy. Unless he wanna take on this awesome project and collaborate with someone lol.

For CoopTranslocator all of you should grant credits to Gust, not Mars007, not Nelsona, not anybody - yeah, Hook, that's the story. Now it's a default thing because Nelsona was looking everywhere for his various works/tests in MonsterHunt (even throwing up at stuff from certain servers), adding that and doing small changes there because it was a restrictive thing, and being re-adjusted later here and there.

Bots:
Learn Bot Pathing, simple as that. Not a single time I fired rocket and a moron Bot covering me made rocked to explode damaging myself else making my rocket useless. In all my recent MH things Nobody is covering player, just fight with the damn monsters. I'm not gonna say what "cover" were doing Botz and their activity nearby a BlockedPath - in that Moment I took decision to do my MBots and right now I'm not using any other Bots than my Bots - nothing is better than what you do yourself (this was my UT lesson learned over time). Monster Hunt has a minimal Bot support that can be extended in map with custom navigation points. After 20 years of UT you can learn what SpecialCost is and USE it, Teleporters can be properly set in One Way - we have tools for testing paths from map before to add Bots, and so on. Actually these - cheats after all - are not even needed. I removed these "features" from XC_MonsterHunt and I'm fine thanks.
If you want some Bot Support in your MH map it's not a shame to ask help - yeah, an anti-social behavior in mapping doesn't help, a team-work does 100 times better things than 100 hours of assumptions and failing into another MH unr junk file. Any of my stupid MH cubes has Bot Support as btw... because I understand what is MonsterWaypoint and what is MonsterEnd and what do they need for being reachable goals but slowing down Bot's racing type hunt by using HuntNodes in some more or less tricky spots - done for years, and then BlockedPath works in Monster Hunt as well - use it. It's harder to work manually some paths as long as MH packages from UT won't help UGold but they can be saved elsewhere until paths-net is ready. A manual inspection of paths inside Editor will prevent a lot of time wasted with tests - tests are required only for heavy spots.