The most RiDiCuLoUs Mapping Contest!

Tutorials and discussions about Mapping - Introduce your own ones!
161 posts

EvilGrins wrote: ↑
Sat Jan 02, 2021 11:47 am
Size and mix of monsters can make the match last longer, though you do get points for killing monsters it's not so tiny that you get quick kills here.

Shouldn't get points for killing ScriptedPawns as there is a mutator embedded in the map to prevent that - certainly when I played without bots (and without MonsterSpawn), I didn't get any frags despite having killed quite a few of the ScriptedPawns.

Great fun with or without mutators - in fact probably more fun just using the default UT weapons and health pickups and playing without bots, just go around fighting the monsters.
Top

But everyone knows my map is the winner

Ya it was a bit of a panic just trying to remember how to use ued2 :p plus the time limit added some sweats...
The map was supposed to have snow falling, but after testing the amounts of snow particles in particle43.u I decided this could be trouble, sanked it. I did repurpose the test messages however I missed one somewhere, looking at one if grins screenshots. I also messed up the lighting ... the map looks really yellow... not what I intended. The hallways were to be connected end to end using warpzones but I ran out of time setting them up so I left them in there but not set up. Regarding the size. I measured feralli size in terms of length and width and figured that might be the limit. Originally had one courtyard, but this was too tiny (for me anyways). So I multiplied it

oh well, never had any designs on winning a compo, just happy to try and make something. Ya if I spent more time it would have been better, or something else. Anyways, its another map in the mix... cheers
-=FraGnBraG Level Design=- ***UPDATED! even works on your phone!***
Top

Dude I was just messing with you ...your map looks fun to play.
So don't sweat it.

OjitroC wrote: ↑
Sat Jan 02, 2021 4:55 pm
Shouldn't get points for killing ScriptedPawns as there is a mutator embedded in the map to prevent that

I clearly missed that, oops.

I've got time this weekend to catch up. Still have to setup the voting thread and other stuff for forum members to judge the maps in.

Really only in the corridors, not so much out in the open.
http://unreal-games.livejournal.com/

Ah bahaha! I know you very well to know what "virtually no mutators" means, dude.
Top

Paper's map is definitely #1... in that it's the 1st map entered and is listed as first on the list at the start of the thread.

True, though I mostly launched each map to test by not opening UT and just double-clicking on the maps. That goes with default settings, so no mutators at all.
http://unreal-games.livejournal.com/

What we have here is an arena styled map with a winding staircase spanning from one entranceway to another, with a side tunnel. 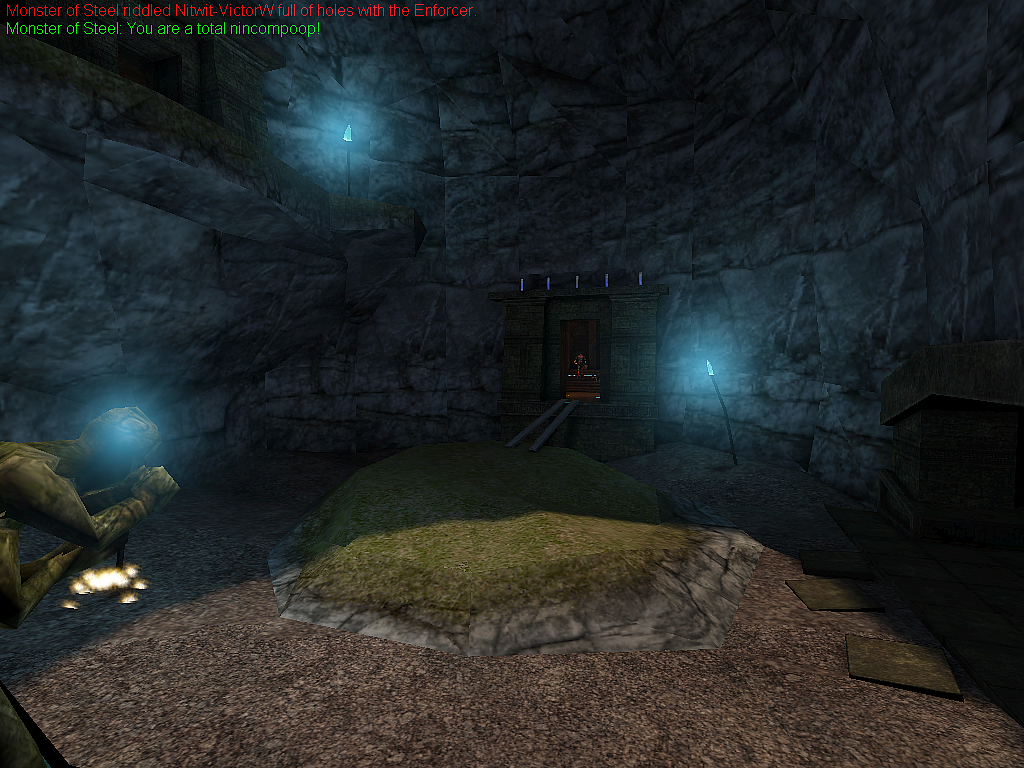 That center doorway leads up to that other one up there on the left, out to a small ledge.

Combat is fairly constant, both inside but mainly outside.

There's a Legless Krall in a side tunnel, who I almost didn't see until he started firing on players. 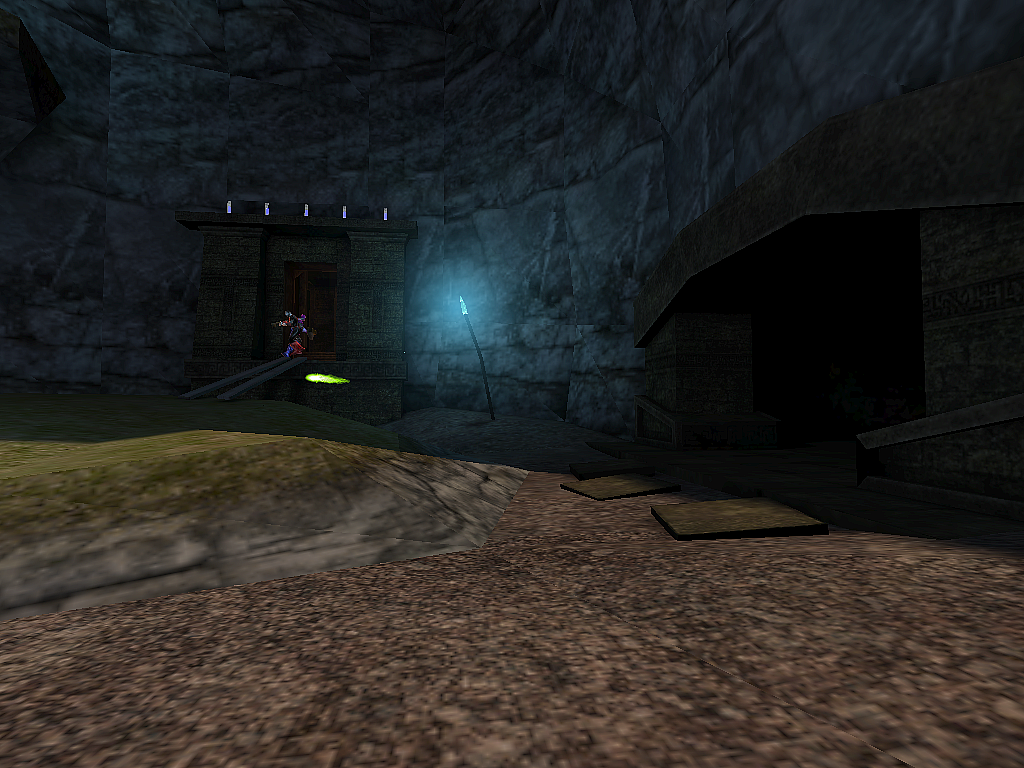 This is a solid map, minus the 2 issues that don't really impact gameplay in any way but are worth noting. 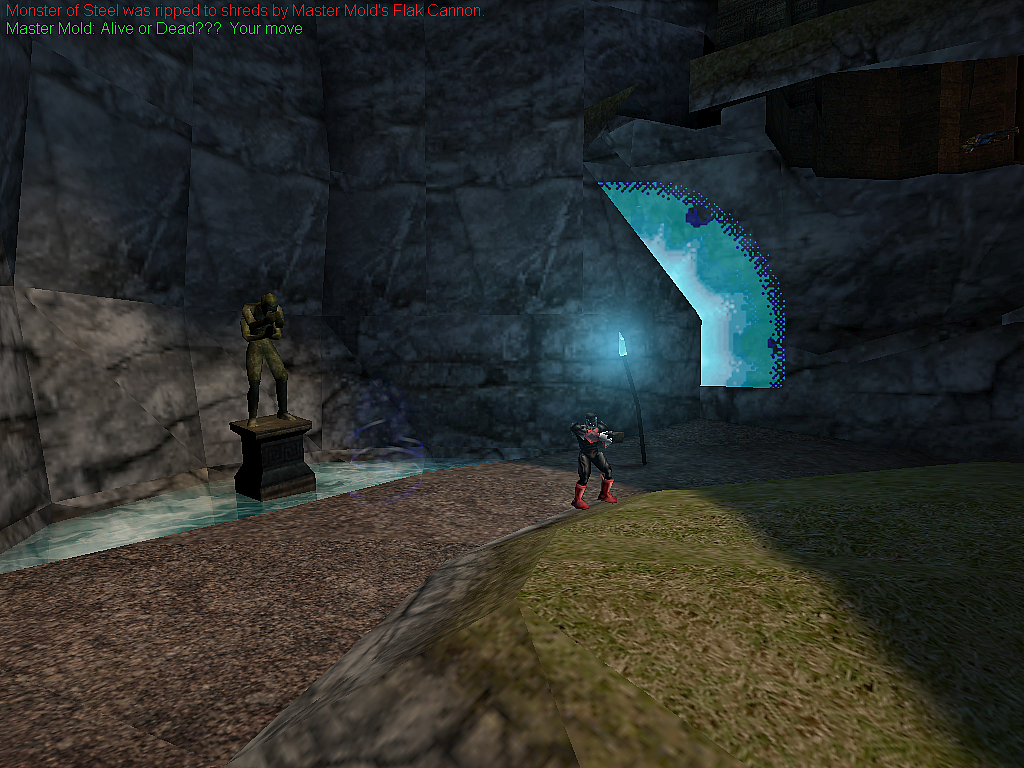 The ledge has some BSP issues when viewed from the opposite side, still a few from close up. You can see through it and it gets occasionally hard to look at when the nearby light interacts.

There's no screenshot for the selection window. That preview that is shown when you're selecting what map you want to play, it's totally blank.

Other than those 2 things, this is a decent map.
http://unreal-games.livejournal.com/

I actually tried to set up a spawn system for the legless Kralls, with that tunnel spitting a couple out every now and then but for some reason it just spawns one and gives up.. oh well I had a blast speedmapping it anywho

Glad you liked it despite the issues!
"The problem with dreams is... you never know when you're gonna wake up"

I ran the map several times in each of the three UT versions I have and the Krall only spawned a couple of times - not sure why - did the same things to try to trigger the CreatureFactory. There are two spawnpoints but only one of them seems to be linked to the factory. The capacity of the CreatureFactory is set to -1 which may (or may not) have something to do with the infrequent appearance of the Krall.

How the map appears depends on the renderer used and its settings - I first played it in 436 with OpenGL and didn't get any fog so I could see the 'skybox' which I initially thought was part of the 'enigma' of the map - then in 469b with D3D9 I got all the fog!

Really nice design/layout and use of textures - a larger version of this would be good.
Top

It's possible to activate fog in the OpenGL renderer settings if you look in the ini. "Fog" is actually volumetric lighting if done via light actors (which requires bFogZone to be true in the ZoneInfo).
Top

... which means INFINITE spawning, running map for a very long time it will fill up all UT accessible memory and you'll get a successful crash.

Nope, that's another stuff which is already described in the topic with Typical MH Level Errors by Buggie regarding to visibility checking... which is a DUMB UT stuff a la EPIC. If "PlayerCanSee.." SpawnPoint monster it's not spawning (based on bCovert crap) - and SpawnPoint is hidden after all, by default nobody can see it unless player triggers a permanent visibility of hidden actors... (lights, nodes, etc.) in my stupid logic something hidden is definitely not visible but Epic had another logic... ignoring their own variables not a single time. Frankly my "stock" ignores this setup because it looks mindless to me as long as it has a limited range and original is bugged.
Top

Gustavo6046 wrote: ↑
Sun Jan 03, 2021 4:51 am
It's possible to activate fog in the OpenGL renderer settings if you look in the ini. "Fog" is actually volumetric lighting if done via light actors (which requires bFogZone to be true in the ZoneInfo).

Yes, thanks - I realise that but didn't make it explicit in my post. Basically to 'see' the map properly one needs to have volumetric lighting enabled.

... which means INFINITE spawning, running map for a very long time it will fill up all UT accessible memory and you'll get a successful crash.

I see - setting the capacity to a positive number - I used 100 - means that the two Legless Krall spawn OK - so that solves the problem.

I don't really understand the point about bCovert - in this map bCovert=True and, as noted, the Krall spawn OK.

In general, in MH maps, having bCovert=Flase can be rather lame as it means one can stand in a particular spot and head shot the monsters as they spawn from the spawnpoint.
Top

lol wrote:
Sun Jan 03, 2021 10:56 am
there is a missing file in the zip DOM-RMC-Singularity
the missing file is a horrible mismatch machine .... i think he must remove this dependency in the map.

I'll be taking some display screenshots today for the thread i'll setup so folks can judge these maps; standard poll setup.

What's a good timeframe for that? About a week??
http://unreal-games.livejournal.com/