Tutorials and discussions about Mapping - Introduce your own ones!
45 posts

Already setup for Deathmatch, most items are fairly well spread over the entirety of the map... not so much sure they need to be moved by maybe extras, more ammo, placed closer to flag locations.

What works best for placing PathNodes, before or after determining flag locations?

Everything should be considered, but I like the nukes. Strategically works well if someone gets your flag but if the flag location is far enough away from the portals that connect the 2 sides, the nukes might take care of the flag thief.
http://unreal-games.livejournal.com/

EvilGrins wrote: ↑
Sun Feb 14, 2021 3:20 am
What works best for placing PathNodes, before or after determining flag locations?

The best is a human being having eyes in a good state - okay, glasses are accepted.
DidIMissAnything.PNG
Eh ?
I'm using glasses, By The Way...

I think I'll do a signature having as text what I need to repeat 7651234 times. WE DON'T have automated scripted pathing tools better than human eye in 2021 yet...
You do not have the required permissions to view the files attached to this post.
Top

EvilGrins wrote: ↑
Sun Feb 14, 2021 3:20 am
What works best for placing PathNodes, before or after determining flag locations?

Presumably after you've decided where the flag bases are going to be - I would assume that several other decisions flow from that starting point as well including the placement of PlayerStarts, inventory, etc - depending on how you think the map should be played.

The downside of the nuclear rain is that one has an extremely limited view of the rest of the map from the airstrike switch and so launching an airstrike is as likely to kill your own team members as it is enemies (depending, of course, on how you've set Friendly Fire).

Interesting but not very relevant thought - I've no idea how long one can fly a redeemer after it has been launched but it could be fun to launch one from the sniper towers and fly around waiting for an opponent to grab the flag and then fly down and nuke them.
Top

Ahem... Prisoner X it's not escaping (unless is wandering around for a while...)
Lolzing_Room.PNG
There is needed some work in here... Flag placement it's the last problem to solve if we speak as "Bots lovers". If not... you won't need too much...
You do not have the required permissions to view the files attached to this post.
Top

Presumably you need to know where the flag bases are so you can set up AlternatePaths and DefensePoints?

Another thing to consider is how the underwater areas are going to be used - they are not that useful as routes to and from the flag for obvious reasons - there is little inventory in them (one minigun I think) but they do provide a route to the healing rooms and from there to the roof of the main buildings. Perhaps they need more inventory but time spent in them reduces the time available for capturing the flag or for defending - so interesting considerations?
Top

There (at bottom) can be Extra inventories for a bit of power. Bots sometimes are going for these especially when their carrier is around and scoring, they can spend a few time as freelancers before resuming attack or defending. By example in CTF-Face they are taking UDamage from time to time even there is no AlternatePath and technically there is no reason for moving through that spot. These can be a Shieldbelt, Redeemer, UDamage - tools for freelancers.
To mention that a CTF map should be covered well with Paths. Enemy carrier or your carrier boosted by a blast and not dying should resume navigation to target Base all the time. I don't see where is the difficulty for doing this.
Top

EZkeel wrote: ↑
Wed Feb 10, 2021 2:31 am
Hey folks.
Just got an e-mail asking for permission to edit Time-Rip.
I really appreciate you reaching out, and apologize if it was a trial trying to find me! It's been 20 years !!
I happily give permission. Hope you enjoy it.

Not sure if it's too late to reply to this post, but I think it should be mentioned that Simon (EZkeel) is one of the best Unreal mappers in the world.

He made our top 10 list for his work on "deCyberEscher" (The House of Escher) made back in March of 1999.

So good to see you again!

jmartin wrote: ↑
Wed Apr 07, 2021 12:31 am
Not sure if it's too late to reply to this post, but I think it should be mentioned that Simon (EZkeel) is one of the best Unreal mappers in the world.

Curiously, so far as i know, this map i started the thread on is the only map of his I've ever seen. Guess I should check out the others...

This idea of mine kinda ran into the ground shortly after I got permission to edit the map. Guess i should also get back to this.
http://unreal-games.livejournal.com/

Just checked the UAO and he has about 48 titles there. Some of them are doubles. That reminds me of an original series Star Trek episode.
http://unreal-games.livejournal.com/

Thing from the other day reminded me of this, that I managed to get permission for the edit (original mapper joined the forum to make it official) and then I completely forgot about it.

So, this weekend I'm going to take a run at it. Make 2 edits for flag placements, where I ideally wanted them and where others suggested putting them, and then submit those for pathing updates... as the map was originally DM and CTF may require alterations due to flag placements and other variables.
http://unreal-games.livejournal.com/

Back in the day that UT-maps and Nali City mapping sites were still up, both held that the ideal aspect for any CTF map was that there was more than 1 way to get to the flag, and at 1st blush I see 2 here.

1. There's a winding path from the ground level to up a ramp and a series of paths at flag level to get to it. 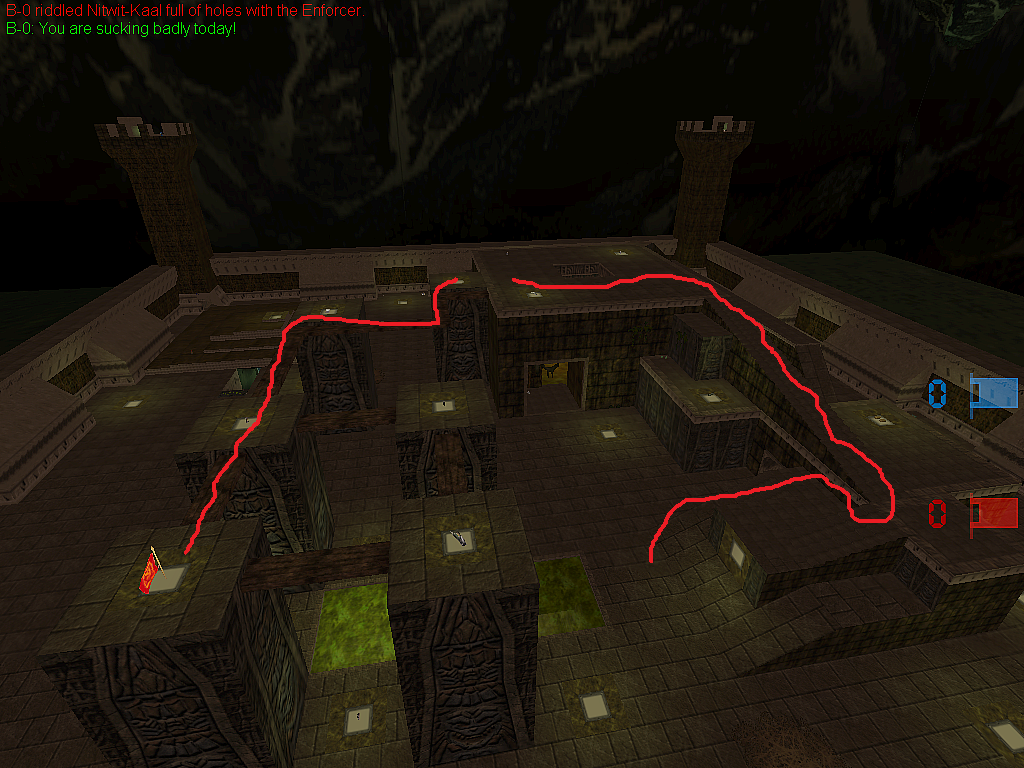 2. For the more adventurous, you can hop into the lift at the corner of the map closest to the flag, then either jump (with jumpboots) from the top of the tower or use the transloc from up there to get to where the flag is. 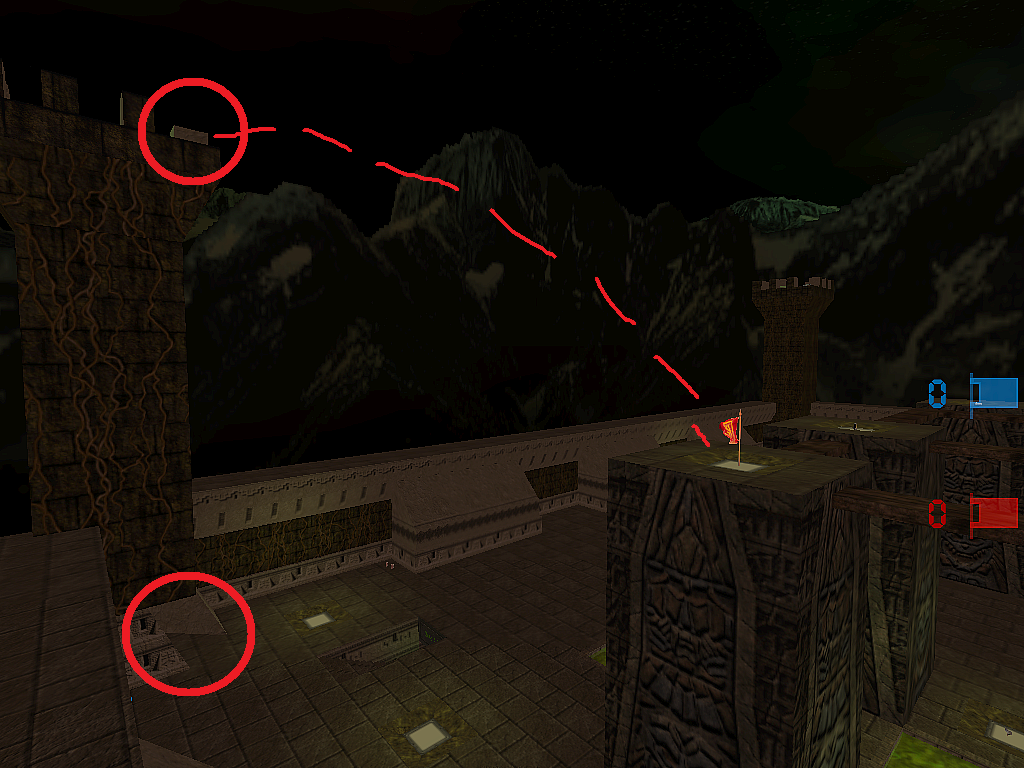 From either of those you can either leap over the side, land in the murky waters, or take those series of paths to get back to ground level.

This is my initial thought, when I'm done with relevant stuff I'll submit it for pathing updates, and then after that start team coloring each side.

When an air-strike is triggered, it takes about 5 to 10 seconds for the planes to pass over and start firing redeemers; 2 p/plane. 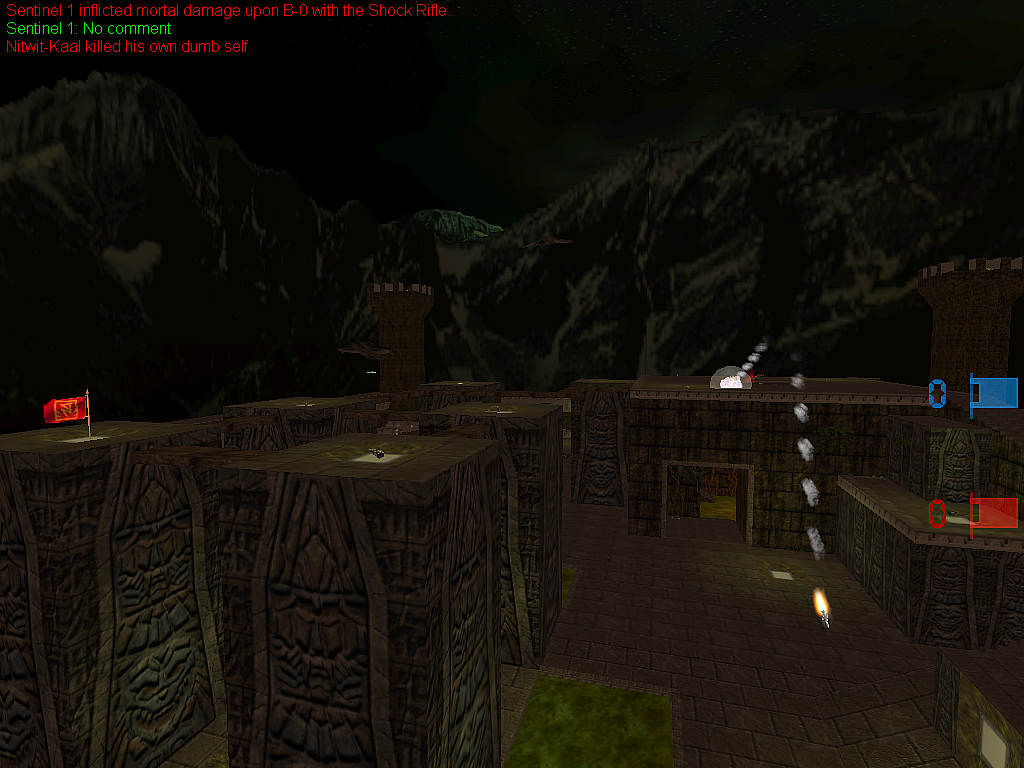 Think I'd like that to stay, it's a good means of defending any team's side of the map, if someone gets the flag but you're not entirely sure where they are... and if you're smart, duck and cover even works for UT-nukes.

Haven't started the edit on the other one yet, slightly hampered as I've not really done much editing of Water Zones before and I'm unclear on how to remove the "muddy water" from the other proposed location for the flags.
Last edited by EvilGrins on Sun Dec 12, 2021 2:36 am, edited 1 time in total.
http://unreal-games.livejournal.com/

There's another route up there - marked in yellow on your original.

R5733555_original.png
This could be an interesting map - it has though, like Face, the potential to be dominated by good human snipers (not that that's a bad thing) as, once one is on the roof tops and pillar tops, the route to the flag is very open and an attacker or flag carrier can be easily picked off from the two closest towers (probably from any of the towers). It could be very difficult and time consuming to successfully capture the flag (again this may not be a problem).

For play with bots, the DefencePoints would need to be carefully thought out, as would any alternate routes to and from the flag.


EvilGrins wrote: ↑
Tue Oct 19, 2021 8:57 pm
Haven't started the edit on the other one yet, slightly hampered as I've not really done much editing of Water Zones before and I'm unclear on how to remove the "muddy water" from the other proposed location for the flags.

If you are thinking of putting the flag in the building (marked in yellow) where the floor is flooded then perhaps bear in mind that the entrance to the other 'side' of the map is close by - this may mean that much of the rest of the map is largely unused as players would generally have no reason to go elsewhere (other than to get weapons and here, again, item placement may need further consideration) - action may be limited to relatively small areas of the map, especially when played by human players.
You do not have the required permissions to view the files attached to this post.
Top

OjitroC wrote: ↑
Tue Oct 19, 2021 10:58 pm
This could be an interesting map - it has though, like Face, the potential to be dominated by good human snipers (not that that's a bad thing) as, once one is on the roof tops and pillar tops

In Deathmatch there's a sniper's nest at the top of each tower, existing pathing on the map made that an ideal place for bots to go... fortunately, there's plenty of places on the map to avoid the DEATH FROM ABOVE.

Still working out good defense points. 1 is close to the flags.

OjitroC wrote: ↑
Tue Oct 19, 2021 10:58 pm
If you are thinking of putting the flag in the building (marked in yellow) where the floor is flooded then perhaps bear in mind that the entrance to the other 'side' of the map is close by

Yeah, the "time portals" being so close to there is 1 of the reasons I was not too fond of having a flag near them... with all that map space it seemed counter productive.

Another spot I was thinking originally was directly above the portals dance club, there's a pedestal/mini-pyramid of sorts, but I scratched that due to proximity too.
http://unreal-games.livejournal.com/

Think I've got all the PlayerStarts fixed for team associations.

Going with a subtle tint edit for both bases, and as the bases are essentially the same base in 2 different eras of time, that's interesting.

Red Side is fresh and present looking.
Blue Side is slightly in the future, and has battle damage here and there.