Best place for tanks to battle is on a GINORMOUS map, and that's what I've been combing my maps directory for. 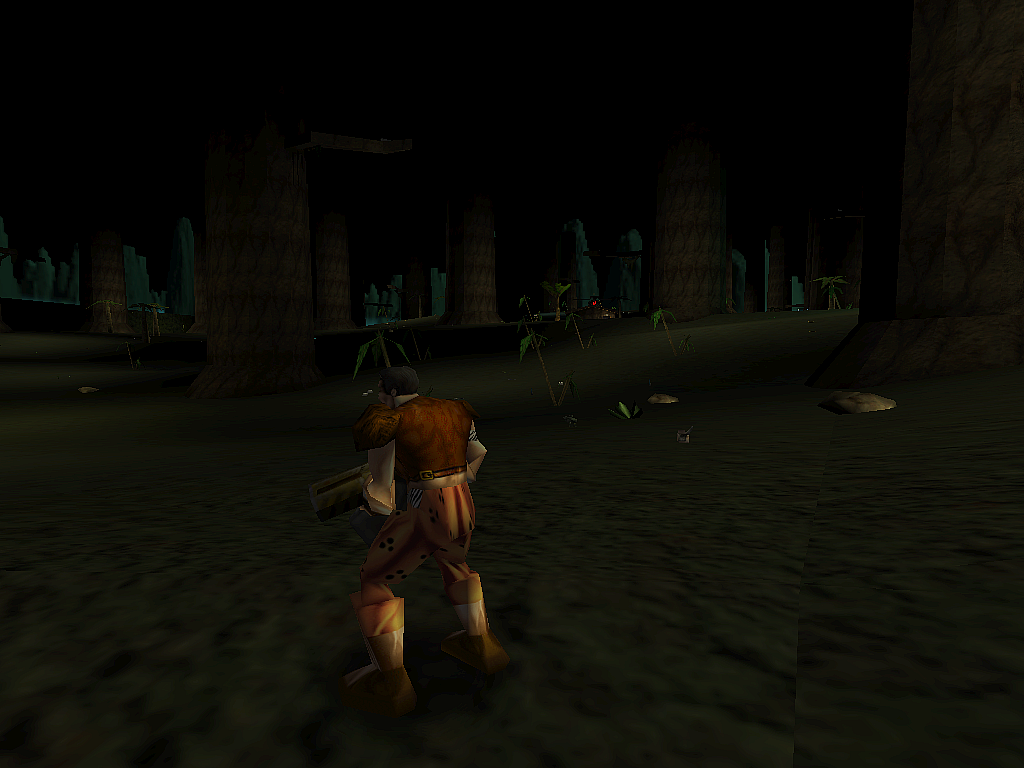 The Dark Forest is one of the largest of the large maps, that isn't GIANT SIZED; no being a little person in a Godzilla sized house! Plus this map will strain a person's driving skills in improving ways, because driving over rocks and stumps and other such forestry tends to damage one's vehicle.

I've placed all manner of what XV has to offer here, 1 of each vehicle and only 1 of the jeeps. Even though there's weapons and ammo all over the map, I setup a WeaponLocker in a cabin that's near the center of all that.

There is no FixGun because that's really ideal for team games, plus this environment really doesn't speak to being such a place to have one of those. 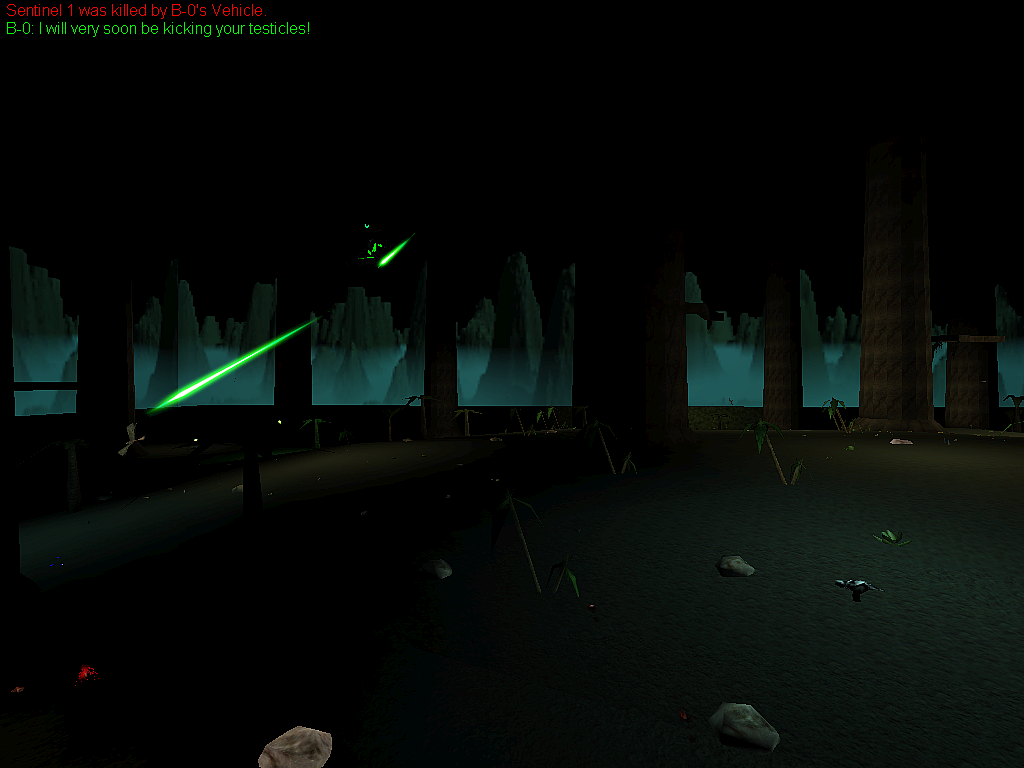 Tanks are in the 4 corners of the map, 1 to each corner; overall shape may seem round but it's really just a very large square. The jeep and heli are by the center cabin. There's some animals on the map as well, with their health seriously jacked up so they won't die so easily...

...initially the map had NaliRabits on it, but I removed them as that is literally the most useless thing in the entire Unreal series. Was tempted to swap them for GoPostal's cats, yes he actually made a cat for mapping, but that thing dies way too easily no matter how much you increase its health. For a time I had LeoTCK's SeaGoats on the map, but during development of various things that proved to be an issue so I had to remove them. Ultimately, I put in SkaarjWarriors though I removed their projectiles... to keep things interesting but not too interesting.

Due to the size of the map and the massive amounts of open space... 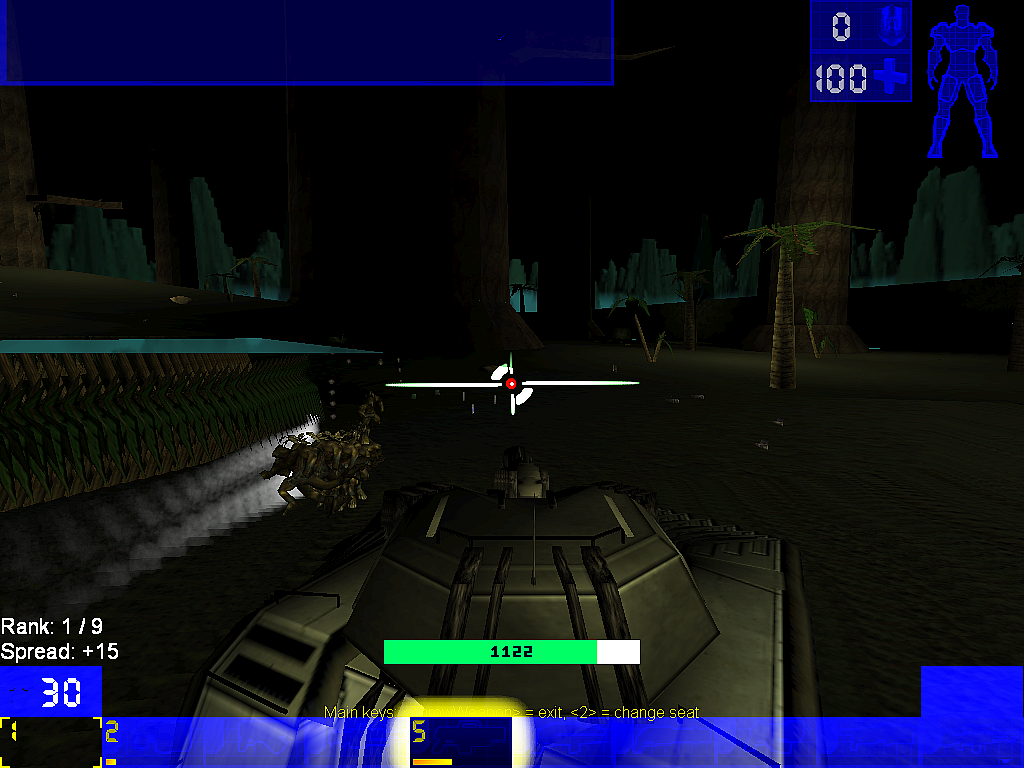 ...the map does have a couple BSP issues, but they're not too bad. Mostly they're out near the edges and they're nothing that can kill you, no bottomless pits to fall in, things only look a little trippy when passing through them.

I removed an invisible redeemer that was on the original, moved another redeemer up to a branch as it was placed below it in the open air for no apparent reason. I removed a couple Uzis, both because other than XV I wanted to keep this a bit more standard and also because 1 of the 2 kinds of Uzis was the Rebel Mac which had the Stars & Bars of the Confederacy on it... and I always edit stuff like that off of maps when I find them.

Yeah, good map for vehicles so a nice choice

Personally I find the flies and Skaarj are just a pain as they get in the way (and have too much health to spend any time trying to kill them so I've taken them out) but that's just me.

The map has no pathnodes so not one to be played with bots.

Buggie's MapChecker throws up a few issues that may (or may not) affect how the map plays on-line (teleporters without bNoDelete?) and there's one teleporter with no destination.

Some of the trees (not the large ones of course) have no collision so it is possible to drive through them - not sure how important it is (adds a bit of spice as it were) but perhaps worth looking at?

It might also be worthwhile looking at the relationship between VehicleFactories and PlayerStarts - PlayerStarts 4, 14, and 15 are right by Jeep/Tank factories and another is by the Helico Factory - this gives players spawning there an inherent advantage (of course, this may even out somewhat over the course of a long game but it may not, given the health and damage capability of the Tanks in particular).
Top

That was the reason I initially tried LeoTCK's SeaGoats, and thought about maybe putting a Cyberus on the map... as neither of them can be killed. Map is about killing other players, be they human or bots... everything else, including monsters, is really just an obstacle course.

Yet bots do play fairly well on the map. This may be due to item placement, bots react to ammo and weapons much in the same way they do those little apples.

There's more than 1, and I toyed with getting some help fixing those but I did this edit mainly for XV and most don't drive their vehicles into a teleport... although it does give every vehicle a speed boost for some weird reason when the teleport works!

OjitroC wrote: ↑Wed Mar 30, 2022 1:25 pmSome of the trees (not the large ones of course) have no collision so it is possible to drive through them - not sure how important it is

Every good obstacle course needs a degree of unpredictability.

That was on purpose, i moved them. I did it specifically for the benefit of playing with bots, so they could get right into a vehicle as soon as they spawned in.
http://unreal-games.livejournal.com/