lol i must change my browser then.

must show this to my dad
http://www.youtube.com/user/R1chieXD
Top

You took this from UP

The only time i have used somethink else than iE, is when i was fixing a laptop(Firefox) and it doesnt look as good as iE9.
Internet explorer 9 is a good step forward.

Having used numerous other browsers, I always come back IE.

A) It's what i know and it's easy to use, as the article states no doubt to it having so much incorporated into it.

B) Other browsers may require more intelligence given they lack features IE has so it takes more brainpower to compensate for what the other lack.

C) FireFox is more prone to attract viruses than IE or other browsers I'm familiar with. Linux browsers tend to need more active menu usage as the key combinations that do commands do n't function as well under it.

So, I may be dumber but at least I'm happy.
http://unreal-games.livejournal.com/

I use IE9 daily and exclusively, so therefore I'm not the sharpest pencil in the box

Honestly, I think this talking about "browser X is way better than browser Y" talking is mostly BS. If you are not taking something completly for most user unknown or outdated I think its just a matter of taste.
About to be non-active
My very last UT map project: CTF-FacePalm (tropical CTF-Face remake)
Why do I leave? click here
What I want to do next: Joining an UDK team (uncertain however) and improve 3D modelling and texture editing skills
Thanks to those who visibly supported me until/at the end!
My reactivated account on indiedb.com.
Top

Imo, the study is quite inaccurate, although it's well explained the results.

@Renegade: Not really, I actually got this from a friend of mine in google+ lol

But I know there's a guy at UP, called "radio".. something, who posts about this kind of news very often.

@Evilgrins: "B) Other browsers may require more intelligence given they lack features IE..."
If we go that way, then you will loose. Did you know that IE is considered the worst browser EVER to make something actually "work"? You have to download extra MBs everytime in data which are no more than images and scripts with hacks just to make something "simple" to work, something that works flawlessly under any other browser with no complications.

I bet everyone using IE does not know what webdesign is, IE is simply the worst browser to work for. The amount of limitations (Not features, LIMITATIONS actually) IE has compared to other browsers... damn! And you say "more features"? IE is always several steps behind all the other browsers actually.
We webdesigners/coders (I do PHP/JS/Ajax/CSS/html/, etc, as a living btw) have always to test a website or any feature of our website in both IE and any other browser.
All the other browsers are excellent and provide a great CSS and Javascript support since IE6 (CSS 3.0, something IE didn't have until IE9), we have literally to have a CSS to all browsers and then a specific CSS for IE, can you believe this?
What IE9 brings, FireFox and the other browsers already brought since IE6 and IE7.

"C) FireFox is more prone to attract viruses than IE or other browsers I'm familiar with. Linux browsers tend to need more active menu usage as the key combinations that do commands do n't function as well under it."
Again, I don't know where did you get that from, but that's completelly untrue. Actually is the other way around. IE has what's called ActiveX controllers, many viruses were spread thanks to this, therefore IE was highly affected by this.
Relative the other kinds of malware, IE and FireFox for example are somewhat "equally prone", because many of them enter because of "you", the user himself who accepts scans and clicks here and there.
The biggest security flaw in someone's PC nowadays has nothing to do with software actually, it's the actual human behind it, and this is more than evident, plus, you may find more FireFox users than IE users in google saying they have malware in their browser, but that doesn't mean anything, specially since:
http://www.w3schools.com/browsers/browsers_stats.asp
We're comparing more than 40% (users Firefox) to less than 25% (users IE), so saying something like that doesn't make any sense since there are waaay more FireFox users than IE users.

Also, I use Linux at work everyday, use many browsers to test my own stuff and to navigate normally, and Linux browsers actually became better than some of their Windows version, and never missed a shortcut or menu that existed in Windows, and I am more a "drag and drop" guy than a "command line" guy unlike my colleagues (although I have to use them anyway for svn and to run my own shell scripts for some automatization in my work).


So, moral of story: there are many more FireFox users than IE and if you ask any professional webdeveloper who actually scripts and develops css, what they think about IE, they won't be nice at all. At least I don't know any who likes IE at all.
From the user side, he's more prone to find much more website bugs in IE than in FireFox (css and js wise), that's 100% guaranteed.

EDIT: Ever wondered why some websites take longer to take off? Basically you develop a feature client-side, you take 1 day to make it work in FireFox, Chrome AND Opera, and the rest of the week just to run "reasonably" in IE.

And where do you get such nice Easter-eggs?? ....in Fire Fox 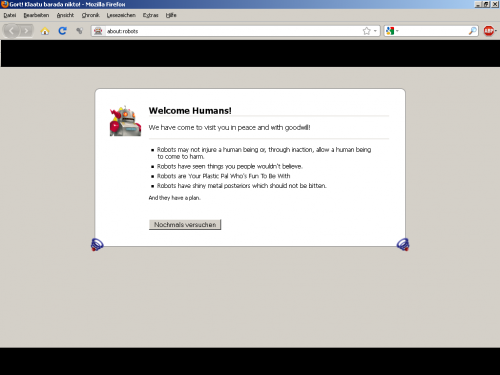 IMO IE9 stands against competing products very well, sure previous versions did have their flaws so people love to bash them and this negativity automatically transfers over to newer releases.
In the end it all comes down to personal preference and user knowledge.
Unreal Tournament Tweak Guide
Top
Post Reply
25 posts