Tutorials and discussions about Mapping - Introduce your own ones!
18 posts

The scale in the map ,Your a bot the size of a pack of cigarets .
Does look a bit bright in the screen shot , My brightness in my ini is a bit more bright but in stock ini looks more like early morning .

Sniper style is what we play as well . I try to make maps not to big not to small .If you only have a few guys playing sniper match . The size is perfect and have good spots to camp in . If you have a full server, There and so many place to take cover , Speakers to get into , Boxes to hide behind .Run and gun servers can use this map as well to play .

{dFb} is a mixed clan of good snipers and good run and gunners . We all camp and send run and gunners out to stir up some movement for the snipers to take out .
We are a very old clan with much respect for game play . All the close quarter kill mods , No assault , etc.... always to just make the game no fun .
Respect the rules of the servers we play on and the rules dictate the way the game is played .
You put close quarter kills on , Team goes up top and ass up on the back of the wall so you can't kill them but then your not allowed to go take them out .
That team wins .Not fair rules to me . same as getting a whole team down in some tunnel and hiding .
Kill or be Killed . you play sniper , Snipe . But the other clan is in a good spot ,You show up to camp there , But now you have to leave cause another player is there from the other team and no close quarter kills allowed (this is my spot you have to leave now comes across chat )Really !
And I can't kill him ! Double really !

Can you imagine in war finding the opposition in a building , then telling your guys they can't kill them and we have to leave and find another spot to try to kill them from . Then when you do as the rule state ,Once you get out of close quarter kills range they shot you in the back !So not fair in my book .
Sorry , I make maps so everyone has a spot and can camp , or a something to hide in or behind . LOL

Inronman skin, I have not started any of the other skins yet . Holidays and time .
The Ironman skin in here is a skin one of my members had . I have never seen it before. I did edit the face in the skin and make the color a bit darker .
I really want to do the rest of the skins for each model ,just ave to find time to do so I guess.
Top

The brightness is fine (remember that your choice of renderer and it's settings will make it different for you)
There are no pathnodes, no bot, zombie or monster action.

This is a good fun sniper map, as it is not too sniper oriented. Lots of ways around the room using cover, and plenty of close-up action, for those who like to taste the enemies blood.
The model complex on the table is a great way to use 2 different scales in 1 map. This idea should be used more often.

The lifts in the walls don't seem to work though (teleports would have been better), so I have been playing it with quad-jump and low-grav.

I may have opted for using decoration boxes under the tables, so they could be given mass and made movable and/or destroyable (William Sherrif "Industrial_Pack1").

Noooooooooooooo!
Although, as I have some bots specifically designed for sniping, this may give me an advantage...

A few hours later...
First look at DM-!!{dFb}-IronMan I ran it with 16 bots on the map while I coasted around in spectator mode.

· Despite lack of bot pathing, bots actively tried to slaughter each other.
· As giant-size maps go, the amount of detail is amazing! Barely noticed any difficulty getting around due to memory drag.
· Battle on all levels. Ground level, workbenches, EVERYWHERE.
· There's an extensive ventilation system throughout the map with lifts and plenty of places to fight in the air-ducts.
· Weapons mutators a MUST. There's sniper ammo on the map but no weapons anywhere at all. You only get what you bring with you.
· Speakers actually vibrate when music is playing, very cool.
· Love the tabletop display for a Stark building project, only part of the map to scale for normal play which is a nice contrast.
· Most giant-size maps don't do much detail for what's outside the windows. While it's less than inside, still very impressive here.
· Iron Man skin in display cases looks like the first release of a particular Iron Man skin I know of. Not the 2nd version.

It's a good skin, love what this mapper did to it. The 2nd version detail was a bit more heightened. It's what I made my War Machine / IM2 skin from. 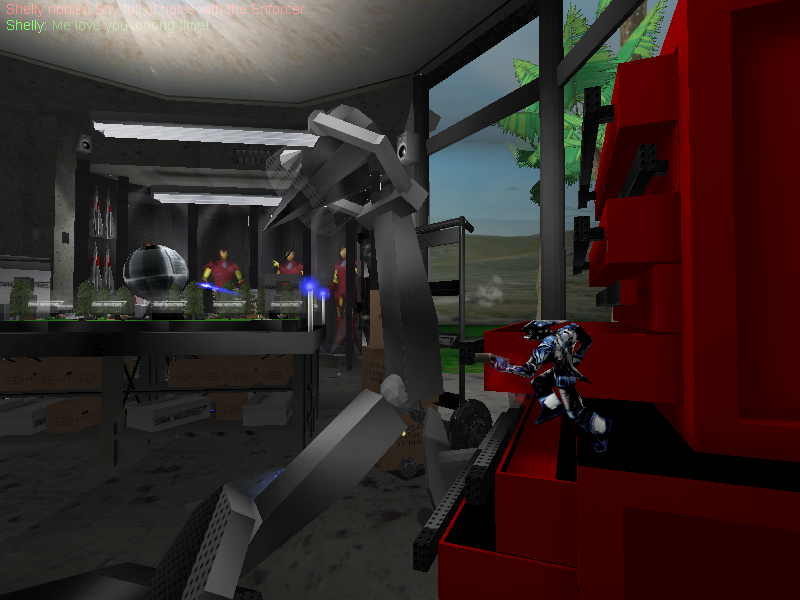