Tutorials and discussions about Mapping - Introduce your own ones!
35 posts

Whole dealio I kept to pretty much 1 forum:
http://hermskii.com/forum/viewtopic.php?f=37&t=3576

Though there's been screenshots from it in several.

Map is THUNDERBOLT'S MonsterHunt DarkForest, a massive map that I loved but thought could use some tweaking. Been getting help from Nelsona, suggestions from others.

It's nearly done, there's downloads on the 3rd page of that for stages of the edit, if anyone wants to take a run at them, but make sure you get my 1st release edit, plus the download for the GreenieGun, otherwise none of the subsequent downloads have anything in them other than the map. 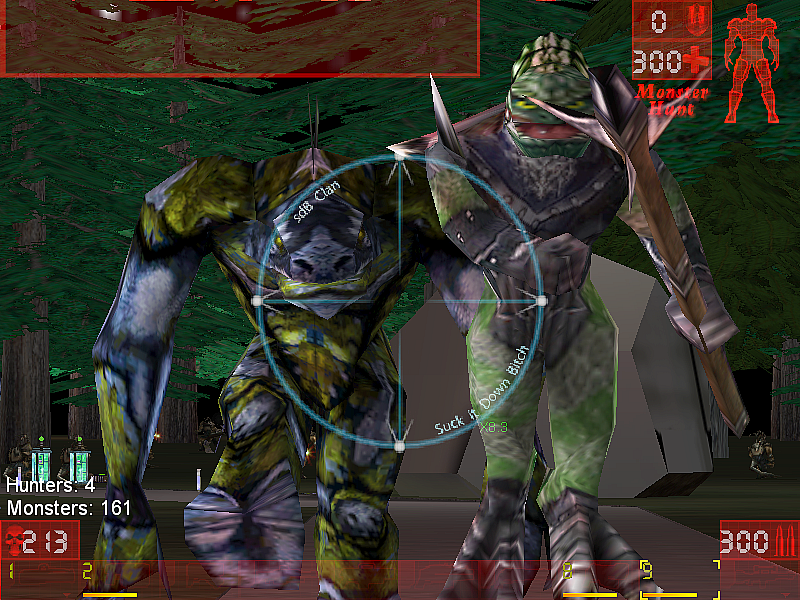 WTF there is NO paths, not even the one for the bots to get out of the start building.
I played (tested) MH-EG-DARKFOREST.unr

Ordered them to "cover me" or "freelance" like pulling teeth since there is no path out of the building.

Put the editor in zone view,and look at the paths.

I would not mess with the looks it looked pretty cool.

The whole map design I can see what you are doing, however I can herd the monsters, use creature factories so one can't do that. That will allow you to decrease the health of those pawns, but still make it as hard.

I like the map, refreshing level unlike all the rest.

Use the blockpath and the monster waypoint to guide the bots along, then spawn more enemies upon the bots them hitting the monsterwaypoint.
Binary Space Partitioning
Top

Red_Fist wrote:WTF there is NO paths, not even the one for the bots to get out of the start building.

Pathing isn't my strong suit, and there was none on the original map. That's why I had Nelsona take care of it. I released my initial edit, Nelsona pathed it, and then I would do some final edits.

Nelsona's first was this:
http://hermskii.com/forum/download/file.php?id=1285
I had some issues with it, under the heading of "TOO MUCH PATHS! TOO MUCH PATHS!!" as everything on the map attacks at once. Which would've been fine on a smaller map but on this big thing it was too much of a memory drain.

This was Nelsona's 2nd:
http://hermskii.com/forum/download/file.php?id=1289
Think they have the same filename, be careful there.

I like the 2nd better, and we'll see how it goes from there. There's a few more bits of tweaking to do.

Red_Fist wrote:Ordered them to "cover me" or "freelance" like pulling teeth since there is no path out of the building.

Originally I played it that way too. Only 3 bots, all of them following me. Usually when they died, i died either just before or after so they'd come out of the cabin again following me.
Last edited by EvilGrins on Sat Nov 21, 2015 9:21 pm, edited 1 time in total.
http://unreal-games.livejournal.com/

You need to see the paths for yourself.

there is NO path network here at all, NONE

ADD
They will follow you, a little but order "freelance" , the idea of paths is to have them not need to follow you and complete the map on their own. (and other important reasons for the monsters)

It's a pretty cool map even seeing in the editor. It has great potential if you learn creature factories, blocked path actor with triggers, and use monster waypoints.
Binary Space Partitioning
Top

medor wrote:None of two have

Time to try it...
About paths, I always have BotZ to fix my issues ^^, might as well post the path file while the map has no network.

What about a BotZ Window menu like the one for the default bots?

It can be advantageous to leave out paths if desired to certain monsters or places you don't want the bots to go or monsters to leave, it can have some advantage depending on the way you want the map to work. Is probably what he is talking about, because sometimes you want the monsters to just mull around some area and only attack when they see you and not follow you around.

I might path this mainly for bots to keep up with you like one long path and not too many offshoots. like follow a road.
But there should at least be a path for them to get out of the house.
Not sure I am looking at the correct map version either.

But what one could do is keep herding all the monsters, go back use a redeemer and kill them all at once. So probably would be good to use those monster waypoints, when a bot hits one it could send an event to spawn another area of enemies, and a trigger for the player to hit, use a large radius. Then as you go along there could be another fight scene more new enemies.

But then if someone just ran around the map there would be a zillion pawns that spawned. That brings in the counter, so for each area you would have to clean before the next trigger could "other trigger turns on" spawn the next area.

There is a ton of things that could be done depending on how you want the map to play.
Binary Space Partitioning
Top

Getting the impression i should've waited until the entire project was done before posting anything about it here.

Red_Fist wrote:there is NO path network here at all, NONE

Yes, that's what I said. The first released edit, the incomplete one, has no paths.

Because Nelsona knew I had all the files for the map, he only mailed me back the map with the pathing he had on it. If you download my initial edit, along with the link for the GreenieGun, and then try all that with the map you downloaded... it works fine.

I can't do anymore on the map until I get home tonight, and Nelsona got my input on his latest edit of my edit... so he may have a newer download for me to look at by then too.
http://unreal-games.livejournal.com/

Just not sure what map I am supposed to be trying, post a link to the most current one for testing.
I have the other files already.

ok this is what I got just now
DarkForest ZETA.zip
Binary Space Partitioning
Top

Red_Fist wrote:Just not sure what map I am supposed to be trying, post a link to the most current one for testing.
I have the other files already.

The ZETA, plus that GreenieGun, have all the files you need. The ZETA has NO pathing.

Try this · http://hermskii.com/forum/download/file.php?id=1285 · That's Nelson'a first edit. He loves it, me not so much... because everything attacks at once.

Grins, u gotta optimize the mesh rendering.
Measure the diagonal distance of the map square, have all decorations have a max render distance of let's say... 70% of said distance, you'll make lots of decos disappear like that if you stand on a corner of the map.
Select the decos, go to Display > VisibilityRadius > set that value to the max visible distance you want.