If you have found new Downloads or created something by your own, please announce it here
27 posts

What's new in version 1.02?
Two critical bugs have been fixed, see changelog for further details. On top of that, version 1.02 introduces a new feature with regards to a possible ACE exploit, which allows possible cheaters to prevent ACE from initializing them. NexgenABM now allows the admin to determine a timelimit until each client's Hardware ID and MAC Hash must be available. If the client fails to provide this info in the specified time, he will automatically be kicked. The settings can be changed ingame in the Server -> Settings -> Plugins panel.


About
The main goal of the Nexgen Advanced Ban Manager is - as the name suggests - the improvement of the existing ban system in Nexgen. It offers reliable functions to keep unwanted players out permanently, as it makes use of the unique and not-changeable hardware Information detected by ACE. On top of that, NexgenABM also includes the ability to ban via the player's hostname. Both, IP and hostname bans offer support for Ban Masks, which allow range banning and precise specifications.

Nexgen's original Ban Control tab has been completely revised, creating the necessary space for including access to all ban parameters. Besides that, a polished Ban Search panel has been added to complement the User friendly interface.

Coming with NexgenABM is the use of the TCP implementation in Nexgen 1.12, which kicks the Client - Server communication of UT into a new dimension. It guarantees fast, smooth and reliable data transfer with low impact on the server performance. Nexgen's original ban data was sent using UT's replication netcode, which was slow, limited and uncomfortable. Client initialization often took around 10 seconds with a full ban list. NexgenABM's banlist instead even allows the double amount of ban entries (256) and initializes the clients in a few seconds. The TCP communication is also used
for another main feature of NexgenABM ...

... called the ACE Admin panel. As you might have already thought, it integrates important ACE functions in Nexgen. It's similiar to The_Cowboy's ACEManager, as the panel provides the possibility to easily request a ScreenShot of any player plus view the detailed ACE Infos of them.

Last but not least contains this plugin the complete functions of NexgenWarn, which can and must be dropped from the server in return.

Version 1.02 introduces a new feature with regards to a possible ACE exploit, which allows possible cheaters to prevent ACE from initializing them. NexgenABM now allows the admin to determine a timelimit until each client's Hardware ID and MAC Hash must be available. If the client fails to provide this info in the specified time, he will automatically be kicked. The settings can be changed ingame in the Server -> Settings -> Plugins panel. 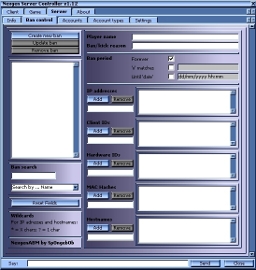 
Credits and thanks
- Defrost for developing Nexgen and especially for his nearly forgotten work on the great TCP implementation in Nexgen 1.12.
- AnthraX for his priceless work on ACE
- Thanks to Matthew "MSuLL" Sullivan for parts of his work from HostnameBan.
- [es]Rush and MSuLL for creating IpToCountry.
- The_Cowboy for ACE_Manager
- To my admin team from the 'ComboGib >GRAPPLE< Server <//UrS//>', for their intensive testing, bug-finding and feedback, and ofcourse for simply beeing the best team to have. Big thanks guys!


Interesting for programmers
While working with Nexgen's 1.12 TCP functions, I encountered a far-reaching bug in Nexgen's core file which will prevent empty strings in an array to be transfered correctly. A detailed explanation and solution can be found here: here.

Oh nice, I was running hostnameban along with nexgen to cover that. Good job!

What will happen will happen. Bug popped up one hour after official release, I highly recommend anyone who dlled version 1.00 to delete it and use the hotfix 1.01 instead.

@Medor: You are to fast for me

I hoped that you haven't already mirrored both 1.00 files, well, I was wrong. Could you remove them and upload 1.01 instead? =)
Website, Forum & UTStats

This plugin is so sexy that you can almost fap to it LOL !

I ask for Help.

I want to use this Mutator for my Servers.

My tries to get Contact with you about this Board PM and Mail were not successful. My Try to get in Contact about a direct Mail was rejected by the Mailserver.

Could you get in Contact with me, so we can get this Mutator run on my Serves?

As an Overview the current Stats:

Gameserver THIEVERY, which is a Mod for UT99 or GoTY Edition.
I already have installed ACE 08h (this runs properly)
NexgenABM requires an installed Nexgen 112 N, so i installed this.
From that Moment the Client PCs get disconnected again and again.

Plz help me getting this working, so i can use the NexgenABM.

Thanks in Advance and best Regards from Germany,
Brody
Top

I don't think Sponge will mind me telling you this, but he (SpongeBob) is travelling around Australia at the moment, so not in constant communication. I'm sure he'll get in touch with you when he can though.

Hmm, from what I understand Nexgen 112N is Letylove's modified version if Nexgen 112. Unfortunately he's left the UT scene so you're not likely to have much luck contacting him about it. Lots of people *do* use that flavour of Nexgen though, so hopefully someone will have some useful input for you.
Why you need a saviour
Top

Thanks for the heads up Shai and Medor, PM sent to Brody

Thx to Shai and Mendor, too.

I am already in PM Contact with Spongebob and hopefully, he will able to Help out.

Maybe i may contact you, should there be kept Problems...

You mean gave him a heads-up or you informed him about... right?