SC]-[LONG_{HoF} wrote:I've noticed that even if I turn off the skeleton its still gets rendered in the game.

yup ...here the same.
I tried the SSEa version again and everything works fine ...the SSEb version ignores the ini.
-=: http://jokercologne.deviantart.com/ :=-

I will check this out later. But it was working when I tested back then...

Feralidragon wrote:I will check this out later. But it was working when I tested back then...

I didn't notice it till now because I play normally with 16 Bots ...but Deathmask's Pestilence map was to small ...and the Smasher model with my Scavenger skin is the first Bot.

The SSEa works fine. The Gore-system in NW3-final works also without flaws.
Only SSEb has issues.
-=: http://jokercologne.deviantart.com/ :=-

papercoffee wrote: The SSEa works fine. The Gore-system in NW3-final works also without flaws.
Only SSEb has issues.

Thanks for the info (I'm glad to know it's ok in NW3 Final, since it's much easier and faster to update the SSE package). Probably I tested in NW3 final and didn't in SSEb (since SSEb is a direct fork from NW3 final gore, pretty much like SSEa). I will test it later and perhaps release a SSEc to fix that up.

Probably I will also release a patch for NW3 itself (mostly because of that BoltRifle icon problem, which is actually annoying after testing the weapons in Pileyrei's server). I still have to figure out the best way to release a patch though (UT sucks so much for patching mods..., that's mainly why NW3 had only 2 releases).

Oh, because you can't patch only the bug ...you will overwrite everything, right?
-=: http://jokercologne.deviantart.com/ :=-

Since I have the whole thing divided by packages for this very reason, I don't have to rewrite anything exactly.
My main problem is mostly that I have to rename the packages that I am going to patch, and I will need to develop something along with it to actually "patch" the current install (copy the new packages, remove the old ones, and replace the references in the INI files by the new packages). There are also the bindings some people have, which also need to be considered. That's why I my updates frequency was low. If UT was properly ready to receive patches and such, I would probably be able to patch NW3 almost every week during the past years.

An admin or enthusiast is generally able to follow directions to do these manually, but most people aren't and thus they need this to be done automatically, reliably and easily, and that's the troublesome part of it. I will probably release a batch file along with the patch just to do these changes.

wait ...this B version fixed the green blood on skaarjs and cows?

You can edit the blood type.
-=: http://jokercologne.deviantart.com/ :=-

yeah i've tried that and failed to get it working. I also plan to add onto the mod to gain purple blood for the 2K4 droids. Here is the video I posted, alot like UT99 Ultimate, only it's not a total conversoin mod to the original UT files. I wrote my own classes, extending/expanding off of the defaults to achieve this, and it is all compatable for online gameplay! I intend on making it's own tab in the UBrowser windows, as it is best to be played with (S3TC) hi-res textures. Here is the thread I made for this video. * UT2004 gameplay in UT99? I think so!!!! - http://www.ut99.org/viewtopic.php?f=34&t=5802 *
Top

Well ...then you should try to contact Ferali on Moddb ...he can maybe better explain what's working and what not.
For me is only the silver/black blood for robots important.

If it matters to anyone reading I have a version of this mod that I'm running on my Unreal coop server (227i). It's fully functioning online and eventually I'll have it so it's not botpack dependent. I know Unreal is a small audience but nonetheless I have it if you need it.
So long, and thanks for all the fish
Top

MH clients have been getting errors like this from the latest build. 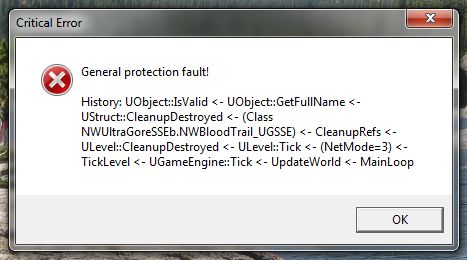 SSEa or SSEb?
You can still use the build in version from NW3-final.
-=: http://jokercologne.deviantart.com/ :=-

One issue though Jack. I am testing the J version and have found that some of the 227i mods no longer behave.
The Ballistics Blood mod would be the best example, due to the similarity.

Ask Smirftsch if you can have a copy to work with, as it also has the newer renderer builds.
For now I guess if I connect we will see if 227j is happy with it.