Search, find and discuss about Mutators!
6 posts • Page 1 of 1

I'd had this mutator awhile but didn't know it was developed on this forum · viewtopic.php?f=12&t=2255

The Golden Reavers are a number of super-bots, with unbelieveable speed and weapons. They're generated by the mutator, but what I didn't know was originally they were all just 1 super-bot. It only went to multiples later.

At the link above is the thread with the download for the original Golden Reaver.

At the following link is the multiple Reavers version · http://www.moddb.com/mods/fury-of-the-r ... er-mutator

As I customize my own bots, I usually have the Golden Reavers fight them in straight bot matches but I was curious how they'd fare outside of Deathmatch. As it happens, not so well. The Reavers don't even appear under MonsterHunt, they don't appear in Assault, same with Domination.

They do appear in Capture the Flag... 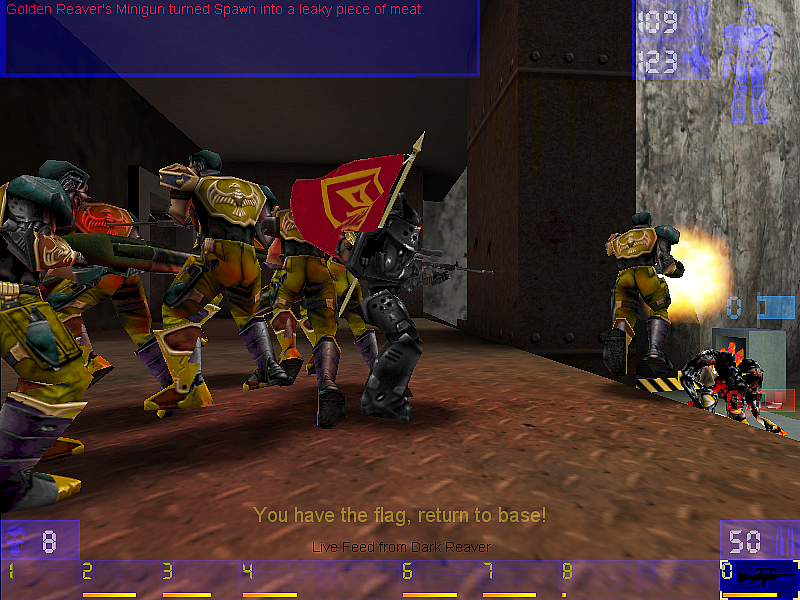 ...but always on the Red Team's side, as that's the default.

For those that tried the original version, where it was just 1 Reaver, is there much difference between that and the multiple Reavers version?
http://unreal-games.livejournal.com/

EvilGrins wrote:The Reavers don't even appear under MonsterHunt, they don't appear in Assault, same with Domination.

causing other crap based on his "team"

It is probably on team A B C not 0 1 2.
Later he died killed by a Boss which was guarding Redeemer and... "Player has been lost" pop up on screen. This Uber puberty dude doesn't use a name and has a lot of nothing added to complete weaponry...
So UTDMT is perfect compared with this "Bot".

Aside note for testing
Look for map MH-DefendingLand... which has redeemer at Start and see how UBerSupreme will hunt you down.

Self note
Because I have a tiny brain I don't understand why was necessary to ruin redeemer because it could spawn higher loading it instantly. In a decent and logic MH map, redeemer ought to be in a heavy place which will not help this guy in hunting. Also it could spawn in a closer weapon spot to a PlayerStart (any) and a code fragment could add it into a normal "Team" or using a timer, (an INI?) and a proper PlayerReplicationInfo deal to gain everything correctly...

And The Hint
Without to load a nasty mutator you might screw your user.ini (after making a backup) as follows:

And probably they will join into games normally not VIA "technologies" if bRandomOrder=False.
Top

"Nel" if you've got a tiny brain, then mine must be microscopic.

Actually, ran a few scenarios on the Reavers yesterday. In Monsterhunt, gave each map a 5 minute time limit just to check something. It turns out some MH maps will not allow the Reavers to spawn in at all, but many will. No idea why, but I'm building a small list of what ones do and don't.

Actually a couple maps the game ends the moment the Reavers appear, as though them being on the map kills every monster simultaneously.

Had to do those MH-games Reavers ONLY. Can't play with them on a map with bots or human players because... well, let's just say it's bad.

Reavers primarily follow the bot-pathing on any MH map to a point, they don't wander far from where the spawn-starts are, even though initially they 1st spawn in random spots all over the map. Which may have to do with the redeemer replacement you mentioned.
http://unreal-games.livejournal.com/

EvilGrins wrote:Reavers primarily follow the bot-pathing on any MH map to a point, they don't wander far from where the spawn-starts are, even though initially they 1st spawn in random spots all over the map. Which may have to do with the redeemer replacement you mentioned.

I'm no longer using that mutator, I have simply defined user.ini and now they are part of game entering normally as common bot does with 0 error. I saved default user.ini for return case, and I can have Uber as part of any Bot related game.

In other instance they... might be frustrating, are moving fast, really fast, I fired a MonsterArena party and simply "they forgot to die" a few times I was like amoeba comparing with them. Later I have challenged one in DM-Deck - full pathed version. Umm, harder job to kill it else NsMonster-s were enough slaughtered, mmm... But this Uber thing triggered me to rework Bot code into a child MBot having all default aliases. This was in purpose to slow down attraction code because it doesn't need to run so often, also wrapping a bit tiny things. I have to modify a bit state and label "roaming,shootdecoration" because if is used into Team mission they run in place while firing weapon, and of course a bit of speed, a bit of jump, are welcomed in challenging humans and monsters. I don't like animations toward 800 GroundSpeed is not like they moving legs matching that speed - it's a lot of work to make relationship between speed vs animations, Uber dude in small places doesn't help with 1000 JumpZ - is a stupid value toward their acceleration making them to look like thrown from a catapult failing to reach in certain spots, nah, I'll do different things.

For MBot I wanna modify things PlayerPawn related in DM match. If exist any valid life-form that is target too not only Playerpawn or bIsPlayer-s. It was more easier to convince Skaarj to not sleep than Bot, which is truly interested in inventories and code is complex, somehow I'll find a solution for an injection into his habits.
Top

I'm still having fun playing around with them, though I've had them for years I bring them into games very rarely. Thought I'd mix them up in bot matches against my UT Corps: 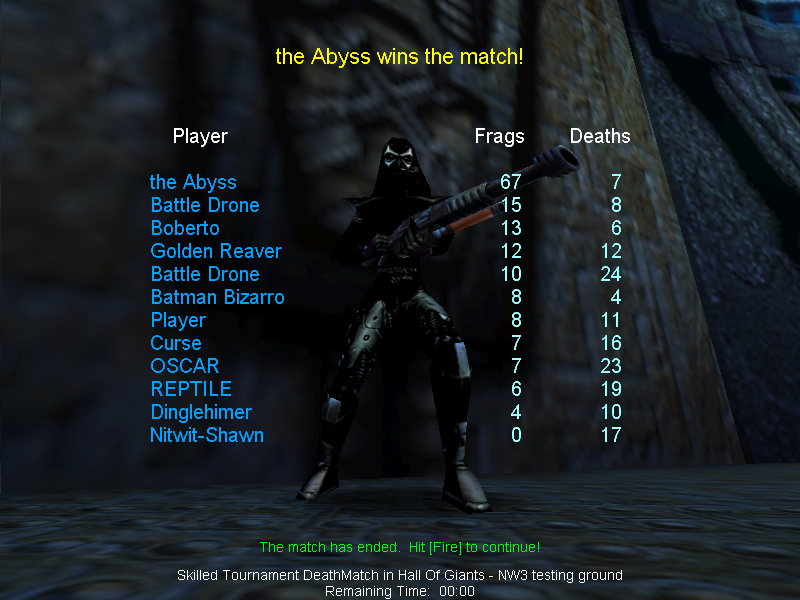 Played them with NW3's Ultra Gore, which revealed something interesting. The Reavers come in 4 classes: Golden Reaver, Dark Reaver, Battle Drone, War Goddess. The dark's a boss model, battle's a male soldier... yet despite the latter, under Ultra Gore it blows up with the bloody gray gibs that mutator has for the boss model.

Seems especially weird to me as all the Reavers, no matter which class you favor, are mapped over the SkaarjTrooper.
http://unreal-games.livejournal.com/

Ultragore detects the skin used... if it's associated with the male/female soldier robot skins (the Corrupt) then UG will use robot blood and gibs. it was a request by me because it looked wrong... and Ferali build it in.
-=: https://joker-seqartist.tumblr.com/ :=-