The PCX files would work best.

There are actually 3 of them for the pulse rifle. The main one, and a pickup and 3rd person view versions.
And the one for the PAmmo.
blarg
Top

There are actually 3 of them for the pulse rifle. The main one, and a pickup and 3rd person view versions.
And the one for the PAmmo.

I checked them all ...This skin should works for all. Because as I said the Pulse is the only one which got three times nearly the same texture (256x256). Only very little variations.
The version for the 3rd person view is even the one with the lesser detail of those three.

But this one is the only version I couldn't test ...because I don't know how to slap this skin on 3rd-P model.

I'll send you the pcx files via PM.
If there is some error just tell me and I fix it.
-=: http://jokercologne.deviantart.com/ :=-

Cool. Snagged the file. Will try it out and let you know how it works.

Probably wont get to it until tomorrow, as I am all busy with some R.L. stuff tonight.
blarg
Top

No problem... maybe I have some more ideas to enhance this skin. But right now I like the outcome.
-=: http://jokercologne.deviantart.com/ :=-

Here are a couple screenshots of the gun with the new papercoffee skin on it: 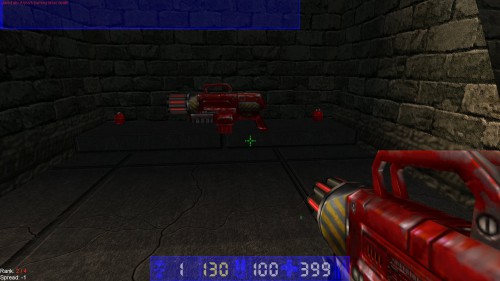 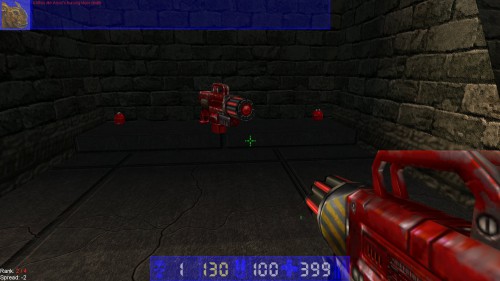 Current known bug:
Online, the included LaserArena_RC2 mutator fails to update the LaserLength variable correctly.
LaserDamage and bShowLen work fine online however.
I believe I know why, and if I am right this will be fixed with an update to just the LaserArena class.

If you decide to try it, be sure to read the updated ReadMe.txt file.
blarg
Top

Ah I see... the ammo counter uses the weapon-skin as well. This should be fixed as well.
-=: http://jokercologne.deviantart.com/ :=-

Actually the default Pulsegun uses an ammocount texture that it has in a utx file.

For the laser I just replaced the thing with the gun mesh, which doesn't really look too bad.
Sorta like a little control panel or something. It seems to have its own ambient glow defined
someplace, but I couldn't find where.
blarg
Top

Oh look! <points in the opposite direction> ...Isn't that Mark Rein?

Nah, it's not him. Sorry, nevermind. Hey look, I gotta go....There's something I want to add to my coop server. Catch you guys later.

<poof>
So long, and thanks for all the fish
Top

If you do put it online, set the LaserLength variable to 10.

Pretty sure I figured out what the bug is, and a patch to the Arena mutator wont fix it. (At least not correctly...)

Should get it fixed here soon. Gotta test a few things out to see if I am right or not.

It involves stuff like 'Replication' and 'Variables'.
Would get more specific, but I don't want to confuse Wormbo.

I wouldn't steal the weapon, I just wanted the skin. I still have all the healing gun stuff and this skin would work very well with it. I've been thinking on importing into my coop server as a gravity gun to play with. That being said, when you get all done and happy I might import this into Unreal with your blessing.
So long, and thanks for all the fish
Top

No quarrel, I can make a second skin ...much better fitting for a healing gun. What do you say?
-=: http://jokercologne.deviantart.com/ :=-

If you get the time to skin the pulse as a gravity gun type thing then yeah, I'd for sure use it. Creating a grav gun is my next weapon project for my coop server. I just finished adding a toggled radar to the HUD (thank you CodeX for the Detector code!) so I'm planning for the next thing to work on.

The grav gun will use the alt-beam as a sort of grabber that will pick up things and let you move them around. Even some things that shouldn't like certain decos, etc. It's not really a logical thing, I just want to play around some. I've been giving some thought to making a constructor mod and server in Unreal. I could never do it in UT but the limitations that prevented it aren't there in 227. Matter of fact I'm going to post on this in a new thread and see if there is interest.
So long, and thanks for all the fish
Top

A Gravity Gun ...mhm ...lets talk about it via PM.
I need a preferred colour scheme.
-=: http://jokercologne.deviantart.com/ :=-

JackGriffin wrote:I wouldn't steal the weapon, I just wanted the skin. I still have all the healing gun stuff and this skin would work very well with it. I've been thinking on importing into my coop server as a gravity gun to play with. That being said, when you get all done and happy I might import this into Unreal with your blessing.

Are you kidding? After what I did to your Mall Zombies, anything I come up with you are welcome to do whatever you want with.
(Jack did most of the work on fixing the TWT zombies. I just tweaked it a bit for the Zombies5 release.)

Re: Done and happy.

I think I am now. Unless some new accessed=none errors crop up, the gun is done. Got RC3 on the test server now.
If you downloaded RC1 or RC2, grab RC3. Links updated in this thread.

Some tips on importing it into Unreal.

1. Either comment out the line in the FLBolt.uc class that summons the LaserScorch or replace the LaserScorch.uc class with one that works with U1.
2. The gun and ammo currently are TournamentWeapon and TournamentAmmo classes.
You can either just switch them to Weapon and Ammo, and rip out the stuff that makes it fail to compile. (Which isn't really a lot...)
OR, make your own copies of both parent classes, and hack at them until they compile without Botpack.

Ideally you would tweak all the code that references class 'BOT' so that it will compile and work with the U1 bots. I dunno how to do that atm....

I know how to rip all the bot stuff out of it completely so it would work with U1 just for players, but that is less than the ideal solution.
blarg
Top
Post Reply
47 posts