MH: Monsters should not move before map starts

You don really get what I mean with Over-Load - it's about ENGINE not CPU.

Aside about CPU : DO you want to see your CPU at 80-99% by playing some map and frame-rate will go at 2 fps or less ? Seriously is not hard to do that, using A.I. and a chained native attack which will use C++ intensive. Will simply make a mess which you will never play. I can write only a few lines and you are done - nobody will play that even in next few years guaranteed. This screenshot was a challenge to do at that frame-rate - I used here first strategy at bunching monsters-team in attack. I was only spectating poor Bots. As you see here was Bot against ALL monsters... 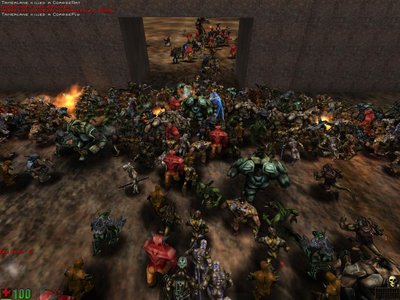 In general you have to distinguish between server and clients load: visual effects only stress clients, not the server. Code executed on server does not stress clients.
Examples:
MH-Miam: climb up the hill and look to buildings - on certain points your frame rate will go down to a few fps. This seems to be a client problem.
MH-Nagrath: shoot projectiles into air in last cave - heavy lags will occur. This seems to be a server problem.
"Multiple exclamation marks," he went on, shaking his head, "are a sure sign of a diseased mind." --Terry Pratchett
Top

Imagine that always I had 14-30 ms default ping. In those "cute" experiments I went to 500 ms ping proving that server was pretty busy. I assure you that 600 Pawns roaming are not a good idea, do testing and we can chat about this later, as a recall, server dropped me for "high-ping" which is not usual when you are inside the same Network/ISP with default 10-30 ms ping. And then I was interested who is lagger. Server had 90+% CPU usage - effects of native's PathFinding - see those things and multiply them with 600+. I checked how long takes a path query - it takes more than "IsA".

Yeah is MeltTown pretty well pathed running a Karmic experimental MH2 type in testing stage - else these things are not happening in default setup, map is running well so to speak.
Top
Post Reply
33 posts