Tutorials and discussions about Mapping - Introduce your own ones!
Post Reply
29 posts

I was creating an elevator right in the middle of a tower, so I subtracted a tall parallelepiped, when I rebuilt the lightmass I noticed what I subtracted already had some lights inside. That was strange and so I reloaded CTF-Face.unr and found out both the towers have lights in the middle stuck in the wall.
It probably means towers had elevators and they got removed after having duplicated the tower.
"Your stuff is known to be buggy and unfinished/not properly tested"
Top

Yes, the prototype of Face had elevators to reach the top. Later they decided to change them with teleporter. Maybe due to game flow... to get the defender (camper/sniper) faster in position.
-=: http://jokercologne.deviantart.com/ :=-

papercoffee wrote:Yes, the prototype of Face had elevators to reach the top. Later they decided to change them with teleporter. Maybe due to game flow... to get the defender (camper/sniper) faster in position.

So it was well known? Is it in the beta map? I didn't play any of them.
"Your stuff is known to be buggy and unfinished/not properly tested"
Top

I don't know. I've read it on some wiki.
The link was posted here on the forum... have to look if I can find it again.
-=: http://jokercologne.deviantart.com/ :=-

I'd like to play this ctf-face with elevators. Does it still exist somewhere?
Top

Is that some kind of warp zone? Looks really weird! I was expecting a full height long, fast elivator
Top

Yes. As it seems did they use a horizontal warp zone.
But if you followed my development of the Insane Tower map are horizontal warp zones not recommended for online gaming because some player can have a disadvantage because their view rotate when entering a warp zone. This could be the reason why they canceled the lift idea.

Instead of fixing the warp zones did they go the cheaper way and implemented teleporter. Thank you Epic

papercoffee wrote:Instead of fixing the warp zones did they go the cheaper way and implemented teleporter. Thank you Epic

WarpZone's had to work even between different servers, but they didn't complete it. Imagine the goodness of it /o\
"Your stuff is known to be buggy and unfinished/not properly tested"
Top

. It's just a dumb thing which usually doesn't work as supposed. Actually you cannot force all admins to have the same type of server.
Top

sektor2111 wrote:I cannot imagine Bot traveling between servers and neither player when those servers have different files/mods and setup

. It's just a dumb thing which usually doesn't work as supposed. Actually you cannot force all admins to have the same type of server.

There are still some class checks that could be applied tho.

Then the lights must be from an even older prototype of this map.
Maybe a normal lift wasn't fast enough, so they came up with the warp zone solution and finally the deleted the lift and set up teleporters.

Here's a fun way to test that elevator warp-zone:
· Goto the top of the tower
· Wait until the elevator goes back down
· Jump into the shaft

Warp zone should make the fall very short, but without the lift if the warp zone doesn't break the fall... it should kill you.
http://unreal-games.livejournal.com/

Also, the two lights are not perfectly aligned, maybe there was a stair but that would have been too much dark at some points: 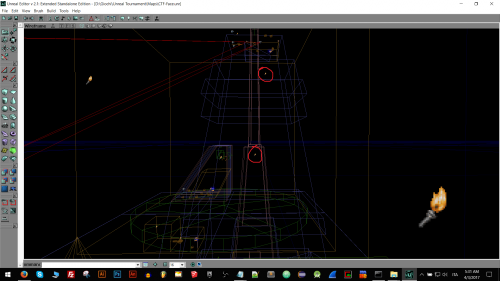 And this middle light here looks like it was placed and left directly onto that subtracted surface, but it couldn't have been done without an additive brush around the subtractive one: 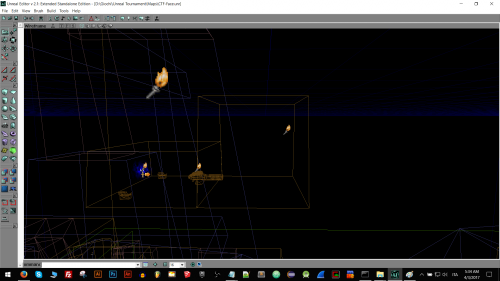 As you can see there are two subtractive brushes, but they hadn't been subtracted using the same brush, I turned them both additive, and this is what they looks like: 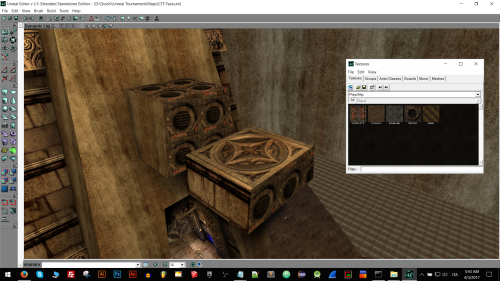 The texture at the top surfaces aren't the same, unless one of them was changed later, but it wouldn't have much sense cause at this point the brush last placed should have been the one with the reedemer inside, and the big one should have been the first one placed, which would be weird.
This probably means that there was an additive brush there.

Plus, "PlayrShp" textures? Maybe the map was a mix of ancient and modern style? (Like it is on UT4)?
"Your stuff is known to be buggy and unfinished/not properly tested"
Top

Inoxx said the lift was removed because he couldn't get the bots to use it as he wanted.
Lights not aligned are probably a result of copy/pasting or duplicating without bothering to do things perfectly right. Most of Inoxx's maps have this "on the brink of imploding" build quality.
You must construct additional pylons.
Top
Post Reply
29 posts