For my MH server I mostly use Medor's place to pick and load up maps. But again and again I find packages that contain silly stuff not related to the map, for example MH-GreatCastle+Fix.unr.zip:
Screenshot content of ZIP archive
Show 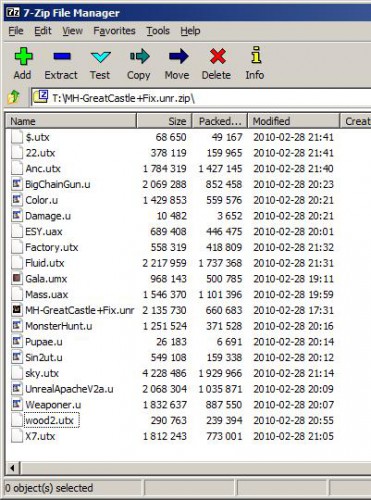 Furthermore some dependent files are missing. Also sometimes files with the same name as other common used files are included but have different content (I remember WOOD.UTX in another package).

Who makes such lousy archives or was just the cat jumping on the keyboard?
"Multiple exclamation marks," he went on, shaking his head, "are a sure sign of a diseased mind." --Terry Pratchett
Top

Interesting post and lends relevance to my not deleting doubles or triples of archives if they are so much as 50kb different in size. In one UT map folder alone I have 53,000 maps and I don't doubt that many of them are broken in some way. So, I hold on to everything. In that folder I have 4 versions of the map you speak of, from 1.2MB to 12MB, all the same name. Who knows which one works.

My guess is that over the years, things have just been tampered with; people rip others work apart and release it again, a mishmash of things that maybe never did work correctly or only might have worked on a single machine, one that had all of the items needed.

Carelessness in part anyway - yesterday I downloaded a map from the author's site only to find the music file was not included in the zip - a search has failed to turn up the .umx so now I can't play the map.

Naivety and thoughtlessness as well - not knowing or caring that a name for a texture package has already been used or simply calling stuff MyLevel.utx or MyPackage.u. Texture file conflicts are not uncommon so one does need to keep different versions of .utx files with the same name.
Top

OjitroC wrote:a search has failed to turn up the .umx so now I can't play the map.

You can take any UMX file, rename it to the desired name and you can run the map. But the changed music will not played, and please don't publish the renamed (wrong) UMX file because of file mismatch.
"Multiple exclamation marks," he went on, shaking his head, "are a sure sign of a diseased mind." --Terry Pratchett
Top

This is obviously let's say The CYCLE. Clueless people are doing a mess and then run away - next addicted do the same. When I have posted about such hosting "help" for MH admin I pointed crap like Botpack.UAX, Engine.utx which were original files copied and renamed, they could be found in a map which in an immediate session was crashing server due to dumb pathing ruin. A Krall crashed game trying to find enemy - utterly idiots "fixing". Then I've described facts, getting the response to "stop complaining and whining in forums", actually those morons were not ever hosted a server to see troubles caused by 0 skill modders and perhaps are happy with no game but strongly advertising a mountain of sh!t with whistles and bells.
I think in 2016 everything should go in MyLevel. All these years they were busy to reinvent warm water Ancient1.utx=Ancient.utx the same crap for another 10 MB to load and list can continue... I'm not even waste 1 minute to look in these "awesome" folders which usually are nominated as "Maps > MH" or such. Nobody was testing 2 minutes those things but are happily hosted for making admins mad.
Top

Barbie wrote:You can take any UMX file, rename it to the desired name and you can run the map. But the changed music will not played, and please don't publish the renamed (wrong) UMX file because of file mismatch.

Thanks for that - would never have thought of doing that.
Top

A fair stretch of years back ASLYE702 (by whatever account name he had at the time) linked me to a download for a UT-Mapping-Tool. You highlight the map you wanna archive, and it pops up a window that tells you ever single music file, mutator, weaponspack, and monster files that map needs.

It doesn't make .zip or .rar files itself, just shows you what you want to put into those.

It's not 100% perfect either, there's a map I helped edit a stretch back I put custom weapons on and it failed to list one of them... but it's pretty decent otherwise.

As an added help, on the end of all maps I submit I put something like this...
Spoiler
Show
Usual Suspects:
==============
.u /system
.unr /maps
.utx /textures
.png - pwetty
.txt - this message will self-destruct
...so folks know what goes where.
http://unreal-games.livejournal.com/

EvilGrins wrote:It's not 100% perfect either, there's a map I helped edit a stretch back I put custom weapons on and it failed to list one of them... but it's pretty decent otherwise

That's why as a pilot says: "manual override" helps. This OLD game has something which is very new for the most of... gamers: stupid LOG files telling all story but properly ignored. While you have seen map good and game is ending (or not really), after quitting the game you can see Lines with "Unload" in log file. Those are all names of files involved and not Woody.utx, Popeye.uax, and neither TomAndJerry.u or whatever craps which these tools are packaging or NOT (amazingly some of them need even NetFrameWork4 which not many people are loving - but they are packing files unused by Map). That's why building a map package is a work in detail and it needs patience. "Tools" are crashing anyway in those types with "byte Material not found" or others with nasty things (track Barbie's roads through topics - still MH doesn't use a separate forum section so still nobody cares) - of course player crash there too but less people are taking in account LOGs anyway...
Top

EvilGrins wrote:UT-Mapping-Tool. You highlight the map you wanna archive, and it pops up a window that tells you ever single music file, mutator, weaponspack, and monster files that map needs.

I use "UnrealDeps v0.1.1" for this: it lists the dependencies of a package (map), compares it to a list of known (stock) files and shows what is NOT in the list. So I can see what additional files are needed for it (but it also seems not to 100% reliable). 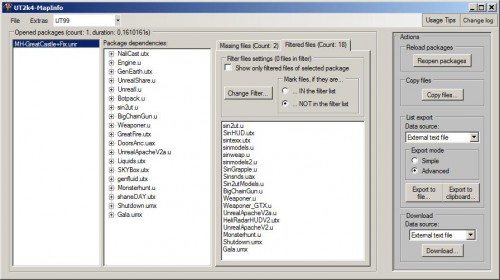 (Thanks to my new friend fdupes

I'll bet that Dragon guy is that one from Hungary which was making a "map" never functional On-Line - this dude has no idea about Unreal Engine (and won't have too soon). Excuse sounded like: I'm sorry, I'm not a mapper.
As you can see MH doesn't have mappers, seriously speaking. The only good thing recommended for such case is a HDD format and all backups burned.
Edit:
The question is: How works a call for certain class if gets called from a renamed package but header resides in other one. Hello, MH is crashing ? Why I'm not surprised ?
Well, we need some listing with such things and information about original stuff vs garbage cloned, and which Levels are using clones... So my idea to remove all Non-Stock stuff is good somehow... he he...

Edit: Somehow well said because we have

[attachment=0]Textures.jpg[/attachment]
So this is "preventing mismatch" solution ? Mah

old file will get loaded based on header so it's useless to duplicate a file if is not recompiled.
Sounds:
Extro.uax = Extro2.uax
And I think MH-(somestupid)-Chupacabra it's the same with MH-TJB-Miniguns if I'm not mistaking names recall.