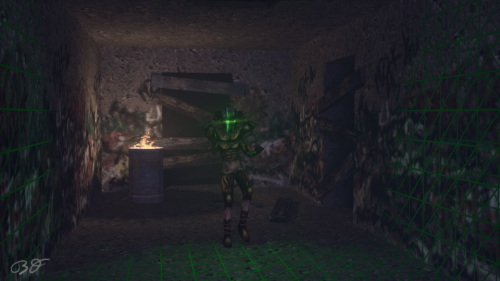 This was a poor nali which somehow found this helmet, when he wore it he suddenly found out how powerful it was. He understood how nothing is valuable itself, value is given relatively by who has the power and who doesn't. The nali needed the fire to light up, now he's the one lighting up. While everyone out there can't take their own decisions, just like the nali before, he doesn't need it anymore. The nali have based all his life on nothing concrete, the helmet didn't change this, it instead is now taken as a confirm that basing all his life in something concrete is not worth, but despite this the nali is still flabbergasted, not that much for the power the helmet confers, but for what he just acknowledged. Probably down to the bottom the nali really hoped that his way of living was wrong, that maybe life really had a sense.

"Illuminali" other than a mix of "illumination" and "nali" means "Illuminate them" in italian.
"Your stuff is known to be buggy and unfinished/not properly tested"
Top

Unreal illustrated fanfiction, this will get bigger than the Harry Potter fandom.
You must construct additional pylons.
Top
Post Reply
3 posts • Page 1 of 1