Recently I installed the map MH-Thra_Fortress (download on DU - account needed) and noticed that if you are in the zone where NaliTrooper1 stays, you are pushed slowly in one direction. That zone has no ZoneInfo actor and the LevelInfo actor has only default gravity and velocity settings, so it cannot be a zone setting (or I missed it).

But if I delete or move the spawn area out of the way (see pic), no push effect occurs. WTH happens there? 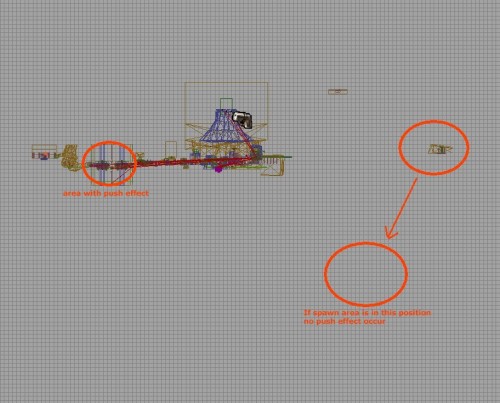 Are there hidden actors?
-=: http://jokercologne.deviantart.com/ :=-

Haha that is some funky business. I'll look into it.
Top

Good luck with it. I have not found any irregular things except some duplicate brushes (but they were not the reason for that push-effect).

Notabene: after I have moved that start area, the push effect was away. Instead the water was missing in WaterZone0...
"Multiple exclamation marks," he went on, shaking his head, "are a sure sign of a diseased mind." --Terry Pratchett
Top

And Nali said: Let me show/tell you something:
- you can bind/use GRAB command on your keyboard for opening the stupid door having the button inside or just wait it to open (100 years should be suffice);
- you can use this command to ruin all game-play in MH servers where mappers were getting used with it because the do not have any clue about it anyway;
- you can happily use all non MH stuff in these "SP != MH" Levels for making a mess and forcing admins to write patchers like these:
a - destroy ONPLevelInfo because has no meaning - also it's bAlwaysRelevant (What for ? Light me here...)
b - spawn some good triggers for doors and ruin that mess called TriggerToggle and bTriggerOnceOnly and bUseTriggered because this is dumbness at full power;
c - spawn some paths;
d - adjust stupid player kills for no reason - just do some little damage and that's all;
e - ADD MONSTERS because it's a MH map after all;
f - adjust factories collisions and setup player touching properly;
e - check/fix second spawn location (aka stupidly said SpawnPoint - SpawnPoint is an actor after all);
f - good luck, generally... with these "smarty" Levels...
And then Nali died because I was happily killing it and nothing was rammed anyway more than it was before. Aside in MonsterHunt503 you will not see too many monsters having AttitudeToPlayer=ATTITUDE_Friendly - seriously...

Edit:
All right, I have done a check around. I think map can be patched for not "pushing" anymore but... this might not be advisable from my side.
The problem comes from a leak (two zone leaks more exactly) - as usual, like in that "awesome" Tarmation2_fixX - where X can be any number from all math, LOL.
Zone with unwanted "pushing" is a X velocity coming from some setup, we have that zone linked with void and void also linked with ZoneInfo16 aka ZoneNumber=1. This means map has some walls which aren't colliding, possible reason Non-Coplanar surfaces.
By quickly checking build section we can see 63 zones which is pretty much a number rising doubts about map's build and also group named "damnrebuild" probably resulting after "Conversion" or an earlier stage, or hell knows what these mappers were doing here. I see a "DuckingZone" addressing "player only" if I'm not mistaking - as usual - this is d..k sucking

. Evilized Nalis served me with their personal and irreversible death attempting to kill me and when have entered into deadly lasers - Nice work

- but useless somehow...
I'm not looking right now why Spawn locations have been screwed - spawning here, there and in multiple spots

In Action:
Here I found the secondary way for reaching at door's button - useless as well due to settings used and by following that "normal tricky" route, I've I lost that FriendlyNali - I cannot figure what happened with him and when...
Generally in raw servers (without a tweaked "SeePlayer") probably more monsters can be killed without opening doors due to default Mover which UT has, monster attacking an innocent door and player can kill it easy with no combat. So to speak these SP maps are losing their entire charm ON-LINE.

Conclusion: Might be playable patched or... it needs a proper rebuild because in current stage I would not share it for Servers but as a sample about "How to NOT do". Probably my motivation for doing another MH map is growing with each seen of these junks "converted", and for saving creativity, perhaps stealing assets from here will have some benefits...
Top

Whow, I just discovered your appendix - if I hadn't wrote this post, I would never have seen it. Too bad, that there is no notification for changed topics...

The problem in this map was a force in some areas that slowly pushed you into one direction. This was a setting coming from a zone above a conveyor belt (ZoneInfo16.ZoneVelocity=(X=100)) but falsely applied to other zones, too. Other effects in further investigations were that a random zone is full of water or lava where it shouldn't be. Also some location strings did not fit.

To see what happens there with the zones, I added this little debugger Actor that shows the ZoneInfo numbers and checks them for duplicates.
Spoiler
Show

As you can see, there are a lot of duplicates. This is caused by (wrong done) multiple ZoneInfos within the same zone, but can also be an effect by too many zones in the map. Then I checked the number of zones: 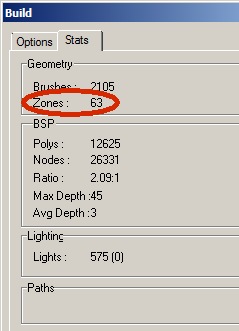 But it seems that this value is always capped at 63, because if you rebuild the map and have a look in Editor.log, you'll notice something like

Now how to find the area with the highest amount of zones? Remove half of the map, rebuild and keep an eye on the number of zones. Finally it came out that 12 pillars are responsible for 48 zones - I removed the pillars, rebuild the map and number of zones went down to 41.
Pillar that creates 4 zones
Show 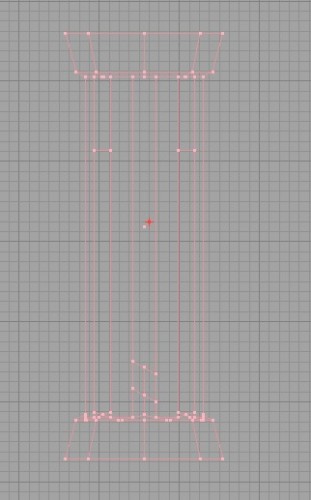 (When the map is fully fixed, I'll announce it.)
<EDIT>
Fixed map is available here.
</EDIT>

PS: See also Nelsonas analysis.
"Multiple exclamation marks," he went on, shaking his head, "are a sure sign of a diseased mind." --Terry Pratchett
Top
Post Reply
6 posts • Page 1 of 1