Tutorials and discussions about Mapping - Introduce your own ones!
Post Reply
126 posts

sektor2111 wrote: In mean time you can open map in Editor walk to textures and browse MyLevel with group Lights. Tell me what you get because I did not see anything with 4 renders tested in Editor...

sektor2111 wrote: ... decals have real troubles if engine will try to attach them on a non-coplanar surface which mean a broken geometry.

In which case, it is something that has been added or altered since the first, stable version.
Top

Wow lots of diagnostics and info. Thanks.

I was hoping it was bb actor causing trouble, but it seems to be much more complex.
If you say the map is just too big, we have an answer. But where is the edge, on what's reasonable and what not? ( Speaking in sizes).
The mylevel light I can remember, this is the blue flare light from CM4. Seems the import process didn't go well.
Open CM4 then the amc map. you can access the group lights now.
So please tell me it is the choas package.

thinking me and others can learn a lot of this.

for the future.
As long we can find out what the source of these unfortunate crashes is, beers and snacks are on me.

I glitched the matrix it seems.

Thanks again for the hard work.
Top

Wait a second... A bit of notes about some Brush where decals were funky.
It says Brush22. I have admit that is aligned to grid but has... square polygons in some angle. In my math a square angled like that and aligned perfectly to grid won't have a coplanar surface in hoping to wrong - definitely some vertexes are required there which I don't see - for making triangles. I'm not sure if in space, if you are following exact points from a grid how you can get a coplanar square in that stage ? Some angles are definitely not at 45 degrees.
Grid might deliver coplanar polygons at 90 degrees, 45, and I'm not sure if other angle will deliver such perfect alignment to grid for such a surface.
I don't know how was produced that stuff but... I wouldn't do that way if I would setup some "island" like that.
A simple geometry rebuild look what was doing:

Now, as a self test, I wanna see if I can recover some vertexes from there...

[attachment=0]straight_walls.PNG[/attachment]
I have to see again if something is causing other troubles. 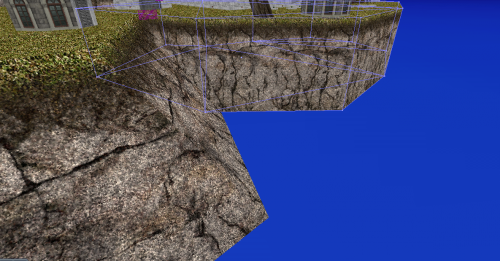 What can I say ? My BruteProjectile class have no flaws, BBoyShars are vaporized - I keep these for opening maps in removal assets purpose, else they would not be there. So, my crash is always related to removal of a decal or something similar - definitely a native here is crapped up or there is a "//fix me" somewhere left for... future plans which will never show up. All I recall it's that advice from brush-building remark to make sure about coplanar polygons, there are very valid reasons for that.
Top

So the problem is the second island nelsona? The main brush of the island is corrupt? Is that is causing the crashes?
Tell me that is the solution , because I am clueless as you guys are. For days I wrapped my head around it, couldn't figure it out either....
Top

First, Brush22 was aligned well at 8uu grid. This time aligning was not an answer due to angles and faces used. Those surfaces should be divided in two polygons-triangles. They are deviated only a bit but are causing pain for BSP, then maybe another one in bridge zone (not aligned but might have the same issue somewhere. Sample: I tried to merge polygons (causing an unique surface) they were not merged like in subtracted Stair case, I'm not sure if are miss-aligned or Editor won't merge horizontal polys, I did not tested these that much. I fooled with that ExTerrain builder or how it's called (in my demo maps) and I did not have so much pain because those surfaces were triangles ALWAYS coplanar and supporting grid alignment and I did not forced merged surfaces during building process. I'm burning to see a tool brush detector capable of showing which brush is bad, at least detecting it if fixing is not possible. The question for advanced and more pro mappers is if it's possible to divide a polygon with a vertex without using a text Editor...
Top

I guess you mean BBoyShare.u - see this posting. I recommend using the version with 177,417 Bytes.
"Multiple exclamation marks," he went on, shaking his head, "are a sure sign of a diseased mind." --Terry Pratchett
Top

can't find package BBoyShar.
I want to playtest this map.

This is your index objects crash. Unfortunately I cannot explain in good terms why. BBoShars is identical with old ...Share which has adds compared with smaller "newer" version - aka garbage. While ...Shars is calling assets from old ...Share (because it's the same) which newer share won't have making a packages soup with null calls, your crash is logic. Shars being just Share will have null dependencies for the smaller case and other Share is bugging assets attempting to deal with internal null objects removed from newer version. It's about some jumper and stupid light texture which no one can see in game as long as those lights are... hidden, LOL.
The problem is... maybe map will run with decals disabled if other things won't happen... More to say, there are swJumpads in map so B_jumperpoint aka fake Navigationpoint is entirely useless.

According to fixing work I have to admit that it's time consuming... I think due to those cuts created, map will require teleporting brushes one by one in other clean Work-Space and building geometry after each brush added in order to figure when cuts are taking place - which brush has funky vertexes causing cuts. Polygons here are not impressive for me. Intention was to save polys but this means risks.
Perhaps I will have to build from ground zero a similar Level and done more simple using only a few parts from here...

Edit: But, because you have captured my attention I decompiled both versions BBoyShare - this is the true version not BBoyShars which is just the bugger here - in order to figure basically internal assets/classes uses in both versions. To say shortly:
VERSION FROM 2005 has THREE classes which are NONE in 2015 version which means 3 things making these packages INCOMPATIBLE.
They are: B_MedPawnBox B_PawnBox B_SmallPawnBox and these depending on mapper version will cause 3 references which are NONE in newer version. And this is how to "support" UT, you don't need to mess with servers. In stage BBoyShars it's identical with 2015 is in fact BBoyShare renamed causing ALL calls to this package, If player uses old version of ...Share probably old share is coming with a memory reservation for those 3 junks un-described in "newer" ...Shars and then... messing up objects wrapping.
Sorting stuff for servers ? Good question... Which version is used for which map ? Answer: Only Devil from hell knows.
Personal Answer: REMOVE every single object from map, probing using BOTH versions.

I don't feel guilty for anything, I have warned you about "packages for mapping" in forum, if mappers are not listening it's not my problem.

The only thing annoying me it's geometry right now causing decals detach problems...
In order to demonstrate what I'm saying, I'll put here my decompiled source for both of them for excepting you to waste time. Look at files and tell me if are the same.

sektor2111 wrote: The problem is... maybe map will run with decals disabled if other things won't happen... More to say, there are swJumpads in map so B_jumperpoint aka fake Navigationpoint is entirely useless.

The map does run OK with decals disabled - the bots get to the final tower OK but get stuck on armour or whatever and so can't actually complete the map.

You're right about the BBoy stuff - it probably is mixed up in the map - note that the first (stable) version was distributed with BBoyShars and the broken version came with BBoyShare.


sektor2111 wrote:Perhaps I will have to build from ground zero a similar Level and done more simple using only a few parts from here...

What about working with the version that was posted first as this runs fine with no crashes.
Top

OjitroC wrote:What about working with the version that was posted first as this runs fine with no crashes.

I don't have that, I was expecting more final like versions which this time was not a good idea.
The note about those junks:
Older version of BBoyShare has WoodenBox similar to what I did but structured different, which means a decoration spawning a monster removed later by some genius in 2015 and which was also making an identical copy of the new ruined crap. I think I will MyLevel such a box... or not, because my box might host three monsters not one...

Maybe if I can take a look at stuff from initial map (but I don't have it) I can figure changes done later and probably fixing those adds.
Top

I think I have found the reason for random crashes: Exchange the CloudZone with VacuumZone and the map runs stable (at least for the duration I tried). Because a CloudZone destroys everything (not only Pawns) I guess that spawning decals there may have caused these decal draw errors.
"Multiple exclamation marks," he went on, shaking his head, "are a sure sign of a diseased mind." --Terry Pratchett
Top

Barbie wrote:I think I have found the reason for random crashes: Exchange the CloudZone with VacuumZone and the map runs stable (at least for the duration I tried). Because a CloudZone destroys everything (not only Pawns) I guess that spawning decals there may have caused these decal draw errors.

I did wonder about that as the change to the CloudZone was one of the major changes since the previous version.

Yes, I've played it right to the end (by myself, over an hour though not continuous) with decals enabled and ... NO HANG OR CRASH! So it is the CloudZone that is the problem