Oh wow!!! What a wonderful video. Thanks for that, man.

Yes, there's the exact PC Gamer CD that i had, with the demo. That was my "portal to a new world".

I remember playing Unreal. Or... trying to play Unreal because of its system requirements. Had to beg my parents to buy me UT. It was worth it... and then I found a tutorial on how to operate Unreal Editor.
Reminiscence - My map collection
My Moddb profile
Top

I found unrealEd by accident, clicked on it was hyped as a kid, think first thing I did was move the flags really close to each other on face.

That's funny, I also got to play UT99 for the first time thanks to that magic PC-Gamer CD (I still own it). I remember playing this demo @800x600 medium settings on a Riva TNT2, I was totally blown away by this game.

Someone found my stream because of LGR's video lol: 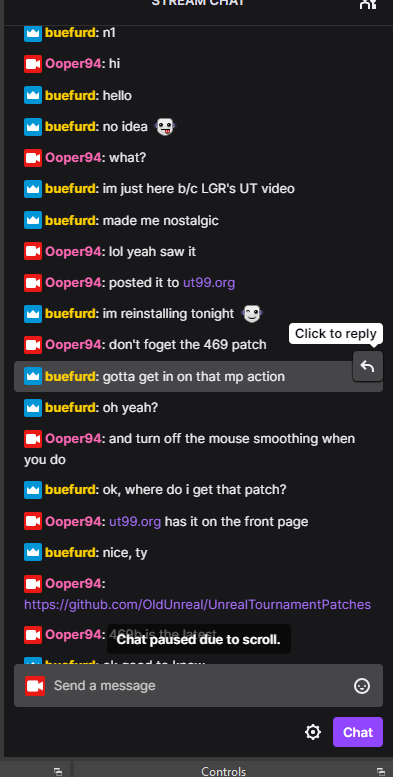 Nice vid, I had enjoyed his Unreal one.
You must construct additional pylons.
Top

More about the magazine game demos. At that time I did not have, or even new what a 3D video card was.

I saw the mags at the stand, and I was like "wow, you get a CD included with free games", you know how much people love free stuff, its psychological.

So I fired it up. Turbine, the first map, and I remember the weird feeling, I had not played any deathmatch before, and I was like "what the...I die, and I click fire, come back to life, but the game continues, does not start over again...what the heck is this?". I felt out of place, I was used to the "standard" games, where you die and go back to the beginning of the level. But that deathmatch "weirdness", not only I started to get used to it, It quickly replaced everything else.

So after Turbine, I played Tempest, Phobos, Morpheus, Coret and Sesmar, in that order. And I saved for a Voodoo 3 3000, cause I wanted to try the other games that absolutely required 3D card, no way around it, and everyone recommending it. First time I fired up UT with the Voodoo I was...Whoaaa!!!...now it looks and plays totally awesome.

Then I tried Quake 3 Arena demo, no software rendering at all there, played a bit, then went back to UT and played way much more, I was "this is the game I love, I am sticking to this one".

Then, after I played that demo to death, I went to the store, and bought the game.