Here's a minor spin off of the Godzilla maps.

You guys get first dibbs before adding it to the web site.
. 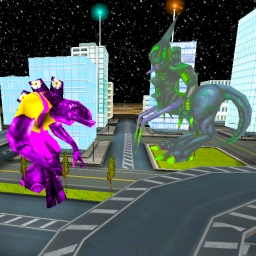 This map is dedicated to Salley Deth de Wicked and Gina who were two of the coolest Unreal chicks ever. Salley not only made her own maps, but she also ran her own server (Yellow Sub) website and online forum called Riot-Girl.net. It was the hippest place to chill back in the 90's.

One of her maps entitled “Bunny Rabbit Stew” featured a Titan dressed in purple overalls and daisies named “Henry” who would chase you around a garden full of bunny heads and easter eggs.

Thanks so much Salley for the memories, and best wishes.

Yeah, I re-skinned Henry a stretch back. Thought he could use a more festive shirt and denim coveralls.
You do not have the required permissions to view the files attached to this post.
http://unreal-games.livejournal.com/