redgrape404 wrote:O.K so how do I revise the thread so that it's focused on one thing

Unlike most forums, you can still edit any part of the thread you want. If you feel the need, just go back to the 1st post and edit it to say something else.
http://unreal-games.livejournal.com/

I have some great ideas when it comes to Woody Woodpecker and his wacky friends taking their brand of mischief into the arena like Unreal Tournament, there's a second link for what the characters should look like in the total conversion and eatch one has unique stats such as when your fighting Space Mouse; you'll need to dump a lot of ordnance on him due to the space suit that he wares on to of that he also has rocket shoes that allow him to reach places that would be limited to other players and he has his own laser gun as well as a slandered issue Meatball Enforcer (Woody Woodpecker Tournament weapon yet to be a real thing)

I also respect the first game made on the Unreal Engine and I would like a single player story mode of two games that needs an overhaule Woody Woodpecker Escape form Buzz Buzzard Park and Woody Woodpecker Cray Castle 5
in the the Escape form Buzz Buzzard Park single player story it follows the Game Boy Color story that takes place in the universe cartoon of Woody Woodpecker the player is Woody Woodpecker but the player can set up the charterer of their choice such as Knothead Woody's nephew, or Woody's niece Splinter and eatch have thier set of skins from normal to space alien etc
in the single player story of Woody Woodpecker Cray Castle 5 the plot for the most part untouched with the charater being the player's choice however along with the demonic creatures the player will also have to fight the Skaarj occupation to free the fairy world and to bridge the gap between worlds; Transition Levels, at the end of each element world,the player is transitioned between worlds in a Nali boat ride to watch eatch world and each transition level brings you closer to the world of fairies and you can see the mothership landing in the castle when you are in the fire world to the fairy world transition level

I don't know what to say?

What am I missing here?

Two years and you re-post the same links as you did in 2015? Why? In that 2 year period you could have learned how to do this yourself!

Carbon wrote:Two years and you re-post the same links as you did in 2015?

Where the evil Nali conquered the peace loving Skaarj all to kidnap their beloved Queen-Mother. Epic stuff!

redgrape404 wrote:I don't have the tools nesscary to execute this and I should put this in one sentence "Can you help me with this idea if you give me some of the tools for this project"

Are you really trying to build a full conversion (which is exhausting) or maybe get together some special mutators and some models that look like Woody Woodpecker?

The thread viewtopic.php?f=13&t=4050 has a lot of models in it, even though I downloaded that whole database I haven't sorted through it yet... but there may be models of Woody type characters. I know there's a bunch of toon type/themed models. Maybe go digging through that first: 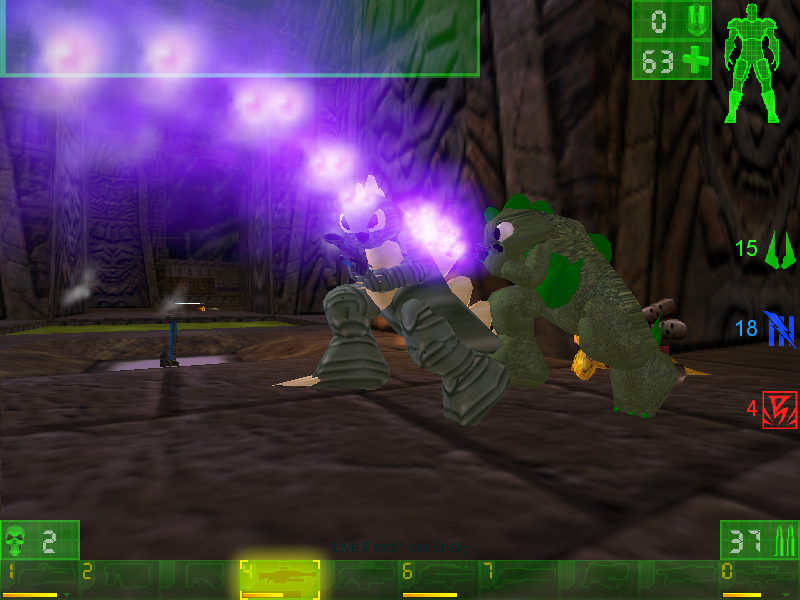 Carbon's right though, your recent post to refresh the idea is virtually identical to your original post at the start of this thread. You say you have ideas but you don't describe the ideas, you're just spamming a bunch of stuff that seems to make no sense as it applies to UT. You're referencing a GameBoy game which doesn't translate to UT very well.

Let's try this: You wanna make something for UT involving stuff from Woody Woodpecker cartoons. Like what? Are we talking gametypes? Are we talking monsters based on creatures from Woody's toons? Weapons that run along those themes?

In order to get help you need to convey what you want... and so far you haven't done that.

Think about it before replying.

Has anyone responded to you on this with any practical help?

You suggested a SinglePlayer campaign? Well http://www.unrealsp.org/forums/index.ph​p is an SP forum. Maybe try asking them??
http://unreal-games.livejournal.com/

Carbon wrote:Two years and you re-post the same links as you did in 2015? Why? In that 2 year period you could have learned how to do this yourself!

You need some UScript knowledge as a base - see tutorials accordingly, trying to recompile some resources found/posted for figuring how do this chapter works.
Then... understanding Meshes and working with applications for creating them - textures etc.
I assure you that 2 years are not really enough for learning and coding this thing to a good primary stage - I'm serious here. So wasting time with posting, is not productive, you'd better start right now, else time is passing useless.
Top

While I admire your dedication, I can't say the same for your self-reliance.

The job at hand is clear; you need to study and practice working with the tools that will make this a reality. Nobody can do this for you so you need to get busy and get this going for yourself. The people here are truly amazing in terms of knowledge and generosity and will help once they see that you have made steps to first help yourself, but nobody is going to do it all for you.

Good luck and report beck when you have made some progress. We always welcome new content.

Ok but I do have a new series as well as Woody Woodpecker, the Earthworm Jim cartoon and besides I am just an armature on the Unreal Engin
Top

redgrape404 wrote:Ok but I do have a new series as well as Woody Woodpecker, the Earthworm Jim cartoon

And don't forget the mighty Teletubbies.

maybe as a cameo but that's as far as i'lll go and along with that; what"s holding me back from me being self-relinant at as well as my deication to the project is copyright i dont know if makeing a TC with two franchise charterers woild me copyright infringement or if it's fair use.
Top
59 posts