Tutorials and discussions about Mapping - Introduce your own ones!
8 posts • Page 1 of 1

MH-XV-MeltTownV1.7z
You do not have the required permissions to view the files attached to this post.
Last edited by Buggie on Mon Feb 07, 2022 3:38 am, edited 2 times in total.
Unreal Tournament v469c - Release Candidate 3 (RC3) public released!
First Vehicle CTF server for UT99

Just a word of warning, the mapper credited to that map has a bad rep on this forum and they may ask you to pull the post.
http://unreal-games.livejournal.com/

Nah ...as long as no one is providing his hacked, ripped and borked UT install is it ok.

But yes, we don't like that guy very much.
when it's possible we would like to avoid his stuff on our forum.
-=: http://jokercologne.deviantart.com/ :=-

- was able to get most places with the next tank down from the big one - used the big one initially to maximise the kills. Took just over an hour to finish the map by myself (compared to the two or three hours it normally takes). It's a really fun map with the wide variety of monster types and of skins and projectiles for many of the default monsters.

The genestpawn.u that comes with the map is an earlier version - the one I have has additional skins but works OK with the map.

The log spam from the insekt's railrocket is a pain but so it goes.
Top

AFAIR it is one of the spammiest log maps.

Well, poop. I was afraid of that.

Like the other versions, this map uses the updated oldskool.u file which conflicts with my original version of that file. When Usaar33 put that thing together, the original had a player model for the SKtrooper that the update removed. 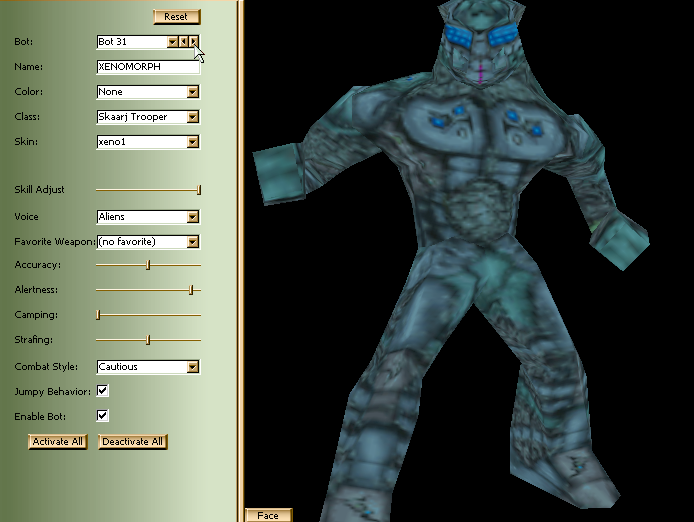 I like my SKtrooper bots, so I can't use maps that use the update.

Been aware of this awhile, update came out back around the early 2000's.

Keep hoping to find a version of this map that doesn't use that.

Yeah, I know there's an OldUnrealModels thing that has SKtroopers in it, but it's got a glitch that was never fixed which I find particularly annoying.

I try fix map from some problems, but others stuff, which come with external packages, still same as in original, and not subject of change.
Unreal Tournament v469c - Release Candidate 3 (RC3) public released!
First Vehicle CTF server for UT99