Get used to it.

Proasm is constantly updating. And for me, it is a good thing.

The timer HUD icon seems to ignore the transparency settings from the rest of the Hud.

SSB102y on UT469b
You do not have the required permissions to view the files attached to this post.
Top

Also it depends on his GameRenderDevice as we only cater for OpenGL
as D3DDrv and D3D9Drv do not work well with transparency.
Maybe ask him what GameRenderDevice he is using, bet it is not OpenGL.

This problem is related to your GameRenderDevice or graphics card.
Some graphic cards like the older Intel cards, or most ATI cards as these cards do not support OpenGL
SSB caters only for OpenGL or XOpenGL.

If you still feel its an SSB fault then I need more information from you on your settings etc.
Que and I have tried several times this evening to get this happening without any success at all.
Also in your SSB Options Menu, make sure 'Enable Fnn Compatibility' is unchecked.
Top

Do you think it's a bug with the renderer? If so, I'll report it at the 469 github

*edit: forgort to mention that I'm on a AMD APU with a Vega7 and the latest drivers. So at least it's not an ancient graphics card

I have weird transparency on D3D9 only. D3D7 don't work on my machines. But in this case the whole HUD is not transparent. Are there any special render settings maybe?
You do not have the required permissions to view the files attached to this post.
Top

Yeah I too have never had any success with D3D renders.

AMD machines use ATI graphics cards which have no support for OpenGL at all.
In your UT.ini file try setting:
[Engine.Engine]
GameRenderDevice=SoftDrv.SoftwareRenderDevice
Your graphics may not be all that good but it should cure your transparency problems

ATI is not, as AMD bought them in 2006. The name of the ATI brand is not used since 2010. AFAIK all modern AMD video cards have complete OpenGL support (at least v3).
I think that the use of software rendering is a bad idea.
Top

PLease direct me if I missed it.

on player join there is a score board that pops up on the right.Anyway to make it show on the left? Anyway to make it not transparent? Hard to see on certain maps. also can the display time be increased? Can we also have scores added on that top 10?
https://www.vulpinemission.com

Also agreed that the fade out time delay should be an extra 5 seconds or so. Or on click-fire

f7r wrote: ↑
Wed Feb 02, 2022 5:44 pm
I have weird transparency on D3D9 only. D3D7 don't work on my machines. But in this case the whole HUD is not transparent. Are there any special render settings maybe?

Verify if HighDetailActors=True under the renderer.

Also agreed that the fade out time delay should be an extra 5 seconds or so. Or on click-fire

Have proposed to @Proasm that we have a top 10 players display on the left with SSB scores.

Thanks! I had auto team balance running and thought it was redundant with both popping up at the same time one on the left and one on the right. Didnt make sense to have two scoring systems so i removed auto team balance. I guess for now I will add it back. Thanks for your reponse.
https://www.vulpinemission.com

no problem , also note that ssb has its own scoring system which is stored serverside

These are stored in the: SmartSBPlayerStats.ini

SSB stores upto 500 unique players data.. so players who alias alot are still counted as 1 unique player.
we're lucky if there's 500 unique players in all of ut99 at this current point in time. so 500 entries is ok.
you can always delete the last 50 entries (pruning) if the .ini gets full.. alot of the lower tiered players are just fly-by-nighters and don't really visit again.
*Join our Discord Here.*
Our most popular mods - MVX , SSB , SmartWFL , UTCmds
Show
MapVoteX
SmartScoreBoard
SmartWeaponsFullyLoaded
UTChat
UTCommands
~Our Servers~
Top 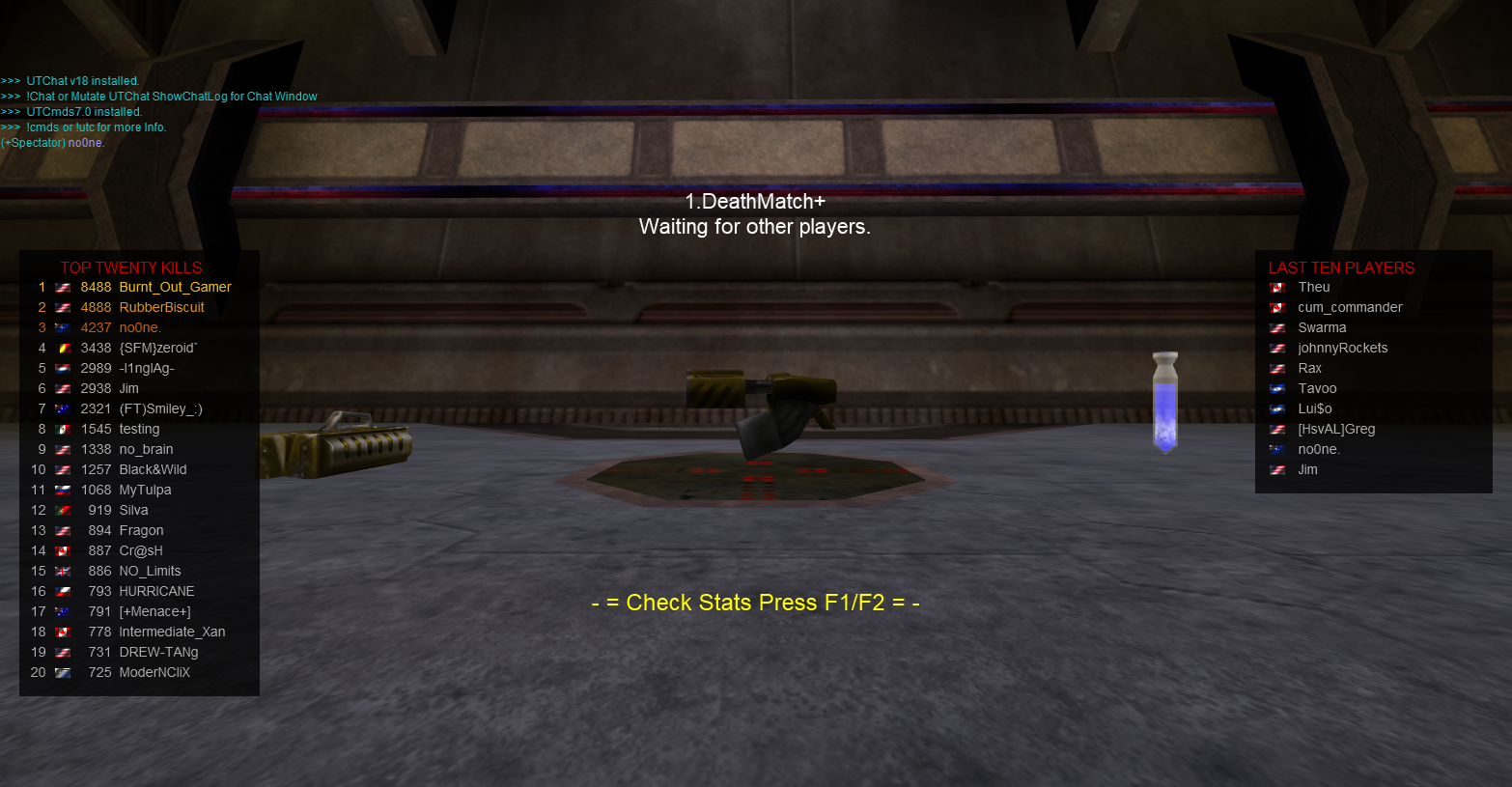 Stats based on SmartScoreBoard saved Stats.

no need for external DB or Website to use SSBStats
all stats saved ServerSide,

BTW This is not a replacement for ATB (AutoTeamBalance) itself but rather an alternative Scoring System which can be used to replace AutoTeamBalance "High scores" part of the mod.

ATB is used mainly for TeamBased Games and Balancing those matches more evenly. If you use NexGen then Sp0ngeb0b has released a relatively newish version of the mod viewtopic.php?f=7&t=13806

So basically you can either use AutoTeamBalance Highscores slide-in or SmartSB's Top 20 Slide-in.
This will be set to on in future releases so don't get worried if you see a double-up of scoreboards on the left.Just disable the one which you don't want, either ATB ,NSC or SSB Though the SmartSB.ini (In the future) see below;
And she's good to go.

Note disabling SSBs Top20 does not disable the stats system all together I believe we have another boolean option for doing this if you don't want to use SSB Stats at all. (Will check)... Nope not at this point in time.

We're currently working on a new naming convention system which will simplify things a bit.
So instead of SmartSB103a and SmartSB103.ini we will have just SmartSB103 and SmartSB.ini